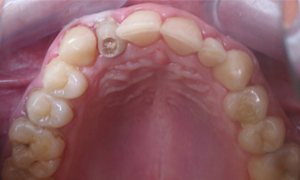 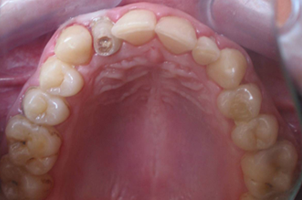 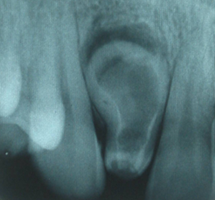 Figure 2: Periapical radiographic view of the deciduous upper lateral incisor, showing a structure expanding toward the apex and surrounded by periapical radiolucency.


What is this condition?

The maxillary right lateral incisor was diagnosed as type III dens invaginatus according to Oehlers' classification.1

After consultations with the department of endodontics and the department of prosthodontics, it was decided that the tooth could not be restored and the patient would receive a dental implant following extraction. To avoid excessive bone loss, the tooth was first separated, then removed. After extraction of the tooth, the socket was thoroughly curetted.

Dens invaginatus is a rare malformation of teeth, probably resulting from infolding of the dental papilla during tooth development.2 The frequency of the condition varies from 0.04% to 10%.3 Oehlers1 categorizes invaginations into 3 classes, based on how far the invaginations extend radiographically from the crown into the root.

In the past, various techniques have been proposed to manage type III dens invaginatus, including conservative restorative treatment, nonsurgical root canal treatment, endodontic surgery, intentional replantation and extraction.6 Considering the anatomy of the tooth and the abnormal dentition process, we decided to remove the tooth surgically.

We believe that, if possible, dens invaginatus in deciduous dentition should be examined carefully and treated promptly as delayed intervention may cause complications, such as periapical infections or patient disturbance.

Acknowledgements: The authors would like to thank Dr. Gunhan, a professor in the department of pathology, Gülhane Military Medical Academy, for his help with this manuscript.