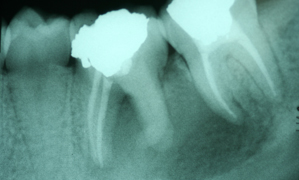 Actinomycosis has increasingly been recognized as a cause of persistent or recurrent periapical disease associated with endodontic therapy. After conventional root canal therapy of the lower left first and second molars, a 24-year-old woman presented with a persistent periapical lesion associated with one of the sinus tracts. The lesion was surgically removed, and actinomycosis was diagnosed on the basis of biopsy results. The clinical and histologic features of this rare condition are discussed.

Persistent intraradicular infection has been deemed the most common cause of post-treatment endodontic disease.1 Such infections are caused by microorganisms that survive the intracanal antimicrobial procedures associated with root canal therapy. These microorganisms may be associated with either the primary infection or a secondary infection.2 Various Actinomyces species have been reported in association with primary intraradicular infections, which may or may not be symptomatic.3,4 The reported frequency of incidental discovery of actinomycotic colonies in surgical material obtained from periapical lesions is less than 5% of all such lesions.5,6

In the case reported here, Actinomyces was identified in a long-standing periapical lesion that developed after root canal therapy and was treated by surgical inoculation. Two years later, the lesion was partially healed, and the patient was asymptomatic.

A 24-year-old woman presented with an abscess involving teeth 36 and 37. Two years previously, she had undergone nonsurgical root canal therapy of these 2 teeth, followed by amalgam build-up restoration (Fig. 1). She had experienced slight discomfort and pain over the previous year. The pain was dull, coming and going with no specific trigger. There was also a history of previous sinus tract infection related to teeth 36 and 37. Shortly before the current presentation, the patient suddenly experienced severe pain with localized swelling on the lower left side. Her general dentist immediately referred her to a specialist. Clinical and radiographic examinations confirmed the diagnosis of symptomatic apical abscess (Fig. 2). Emergency treatment included incision and drainage, and amoxicillin was prescribed (500-mg tablets; 1 tablet every 8 hours for 7 days). Apicoectomy and curettage of the periapical lesion were described to the patient, who provided informed consent.

Three weeks after resolution of the acute infection, an intracrevicular incision was made from the distal aspect of tooth 37 to the mesial aspect of tooth 34. A full-thickness mucoperiosteal flap was elevated, with a single releasing incision in the mesial area of tooth 34. Degranulation of the defect revealed the presence of yellowish granules. A tissue sample was obtained, placed in 10% formalin solution and sent to the oral pathologist for biopsy. To check for root fracture, methylene blue was applied over the root surface, followed by irrigation with normal saline (0.9% sodium chloride). Inspection of the surgical site revealed no evidence of fracture in any of the roots. Resection of 3 mm of the distobuccal root and Class I retrograde preparation were accomplished with 3-mm KiS ultrasonic tips (Spartan, Fenton, MO). Grey mineral trioxide aggregate (ProRoot MTA, Dentsply, Konstanz, Germany) was used as a retrograde filling material. The lingual root was not resected because of its proximity to the mandibular canal (Fig. 3). The buccal flap was repositioned and sutured to the lingual tissue with simple interrupted sutures, and the vertical releasing incision was closed with a simple interrupted suture (Vicryl 5-0 suture and FS-2 needle; Ethicon Inc., Somerville, NJ). The sutures were removed 2 weeks later, by which time the patient was completely asymptomatic, and a clinical examination revealed no sign of infection. Extraoral examination revealed no tenderness in the lower left submandibular lymph nodes, and intraoral swelling was absent. 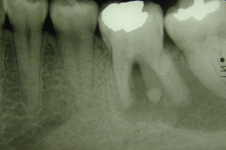 Figure 1: Radiograph obtained before the patient underwent root canal therapy, 2 years before the current presentation. A large radiolucency is apparent in the apical area of teeth 36 and 37.

Figure 3: Periapical radiograph obtained immediately after the surgery described in the current article.

Figure 4: Bacterial aggregate from the epithelialized periapical lesion, indicating the presence of actinomycosis. The aggregate is surrounded by inflammatory cells. Hematoxylin–eosin; original magnification ×20.

Actinomycosis may present in 1 of 3 forms: acute, subacute or chronic. The infection site is usually slightly tender, and the infection itself may be characterized by draining sinuses and purulent discharge. Histologic examination shows proliferation of fibrous tissue containing polymorphonuclear leukocytes, macrophages and multinucleated giant cells and usually surrounding the colonies of filamentous organisms. At the periphery of the colonies, club-shaped forms are sometimes visible.7 The colonies, which vary considerably in size (from microscopic to visible to the naked eye), are often yellow and partially calcified.8

Actinomyces species are normal inhabitants of the oral cavity, but they have been reported to cause endodontic infections.7,9 They are arguably among the first colonizers of the exposed pulp, given their high prevalence in carious dentin.10 In addition to their frequent presence in teeth with primary endodontic infections, Actinomyces species have also been found in association with unhealed periapical lesions.3,11 They have been reported to occur in persistent and secondary intraradicular infections, or they may be the exclusive cause of extraradicular infection, known as periapical actinomycosis. Researchers investigating the microbiota in the filled root canals of teeth in cases of post-treatment apical periodontitis have found Actinomyces species in 3%–24% of the teeth.12-14 Similarly, Borssen and Sundqvist15 found Actinomyces species in 10.6% of 235 root canal samples with positive results on bacterial culture. Among the 25 Actinomyces strains isolated, 17 were derived from the root canal of teeth with necrotic pulps, 5 from root-filled teeth and 3 from teeth with vital pulp. Most cases of periapical actinomycosis have been reported individually, and data regarding the frequency of periapical actinomycosis among periapical lesions is limited to a few studies.9,16,17 The diagnosis is usually made by identifying the typical actinomycotic colonies in a surgical specimen.7

Actinomyces species typically have low pathogenicity. However, when normal mucosal barriers are disrupted by trauma, surgery or previous infection, these bacteria may establish a chronic, pus-forming infection that can spread throughout the host’s tissues.9 Under certain circumstances, an acute abscess may occur after invasion of the host tissues by these bacteria. Co-infection with other bacteria may play a role in the pathogenicity of Actinomyces, enhancing its virulence.18

Periapical actinomycosis is a nonresolving lesion associated with actinomycotic infection and has been suggested as a contributing factor in the perpetuation of periapical radiolucencies after root canal therapy.5,19 Failure to establish asepsis during treatment is one of the major causes of such secondary infections. Secondary infections may also occur after root canals have been filled, thereby representing a cause of post-treatment disease.1

Although the pathogenetic mechanism of Actinomyces has not been precisely identified, certain evidence may help to explain the nature of the infections caused by these microorganisms. Most Actinomyces species are of low virulence, and their mere invasion into tissues is usually insufficient to establish infection. However, necrotic pulp tissue offers no resistance to invasion by microorganisms, except for selective pressures exerted by environmental conditions, which are arguably adequate for most Actinomyces species. Some Actinomyces species have fimbrial structures that may play a role in bacterial co-aggregation within the root canal and that may be important for bacterial survival within the periapical lesion. In addition, these fimbriae would enable Actinomyces cells to adhere to the root canal wall and to dentinal debris forced out through the apical foramen during treatment, and to cling to other bacteria or host cells as they advance into the periapical tissues.22 It appears from the literature, including previous case reports, that periapical lesions contaminated with Actinomyces are unlikely to heal after isolated nonsurgical root canal treatment.

The author has no declared financial interests in any company manufacturing the types of products mentioned in this article.