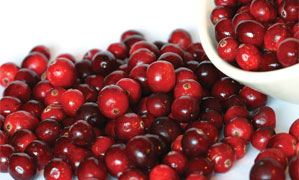 Over the past decade, cranberries and their molecular components have received increasing attention from researchers in human health. In particular, the properties of the high-molecular-weight polyphenols isolated from cranberries have shown promise with regard to dental caries and periodontal disease. These potential anticaries agents inhibit the production of organic acids and the formation of biofilms by cariogenic bacteria. In addition, cranberry polyphenols may reduce the inflammatory response, as well as the production and activity of proteolytic enzymes contributing to the destruction of the extracellular matrix in periodontal disease. The polyphenols of cranberries also interfere with various activities (including formation of biofilm and adhesion) of Porphyromonas gingivalis, the main etiologic agent in chronic periodontitis. This article summarizes the scientific evidence supporting the potential of cranberry polyphenols to prevent and/or treat diseases of the mouth.

Cranberry (Vaccinium macrocarpon) is a shrub that grows in the peat bogs of cold regions of northeastern North America. It is 1 of North America's 3 original fruits, the other 2 being Concord grape (Vitus labrusca; also known as fox grape) and blueberry (Vaccinium spp). Cranberries are sold mainly in the form of fresh produce, dried fruit, juice and encapsulated powders. Cranberry extracts are particularly rich in polyphenols,1 including flavonoids, which have biological properties that can be beneficial to human health.

The therapeutic applications of cranberries date back to the 17th century, when they were mainly used to relieve scurvy and problems with the stomach and liver.2 Today, cranberry juice is commonly recognized as having a preventive effect on urinary infections in women3-5 through the ability of its high-molecular-weight polyphenols (tannins) to inhibit adhesion of the pathogen Escherichia coli to the mucosa of the urinary tract.6 These same compounds can also prevent adhesion of Helicobacter pylori to the gastric mucosa, thus interrupting a critical stage in the development of gastric ulcers in humans.7,8 Some cranberry extracts also exert an inhibitory effect on the adhesion and infectious capacity of the virus responsible for seasonal influenza.9 In addition to their impact on certain infectious agents, polyphenolic fractions prepared from cranberries have been shown to inhibit the proliferation of cancerous cells in the mouth, colon and prostate10 and might therefore help to prevent certain forms of cancer.11 Finally, significant scientific evidence suggests potential benefits of cranberries in cardiovascular diseases.11

In terms of oral health, various studies have shown that the polyphenols in cranberries have several properties that may be beneficial for treating and/or preventing dental caries and periodontal disease.

Dental caries is one of the most common infectious diseases among humans. It is a multifactorial disease characterized by acid demineralization of the tooth enamel. The organic acids produced by cariogenic bacteria, including Streptococcus mutans and Streptococcus sobrinus, following fermentation of sugars from food (principally sucrose) reduce the pH of the biofilm to less than 5.5. Such acidic conditions are favourable to the dissolution of tooth enamel.16

Periodontal diseases affect the tissues that surround and support the teeth. These conditions evolve episodically, with phases of active destruction, latency and healing. In gingivitis, the inflammatory process is limited to the free gingiva, whereas periodontitis is a progressive disease that affects all of the tooth-supporting tissues, including the periodontal ligament and the alveolar bone. Two principal factors are involved in the pathogenesis of periodontal disease: the subgingival accumulation of the strictly anaerobic gram-negative periodontopathogens17 and the host's immunodestructive response to these pathogens.18

In recent years, several researchers have tried to identify edible, nontoxic compounds that could interfere with formation of the cariogenic biofilm. In this regard, it has been demonstrated that certain constituents of cranberries may limit dental caries by inhibiting the production of organic acids by cariogenic bacteria, the formation of biofilms by S. mutans and S. sobrinus, and the adhesion and coaggregation of a considerable number of other oral species of Streptococcus.

In a clinical study, Weiss and colleagues23 investigated the effect on oral health of a mouthwash supplemented with the NDM fraction of cranberries. After 6 weeks of daily use of the mouthwash, total microflora, notably S. mutans, was significantly reduced. In support of these in vivo results, in vitro studies showed that the NDM fraction inhibited the adhesion of S. sobrinus to a hydroxyapatite surface pretreated with saliva.23 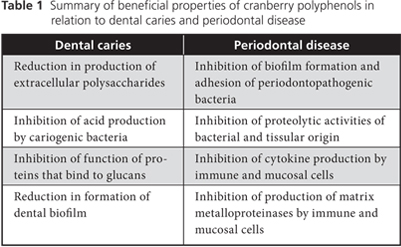 The polysaccharides glucan and fructan play a primary role in the adhesion of bacteria to dental surfaces and in the maturation of the biofilm. Various groups have demonstrated that the cranberry's ability to inhibit the adhesion of S. mutans to the dental biofilm depends on inactivation of glucosyltransferase and fructosyltransferase, 2 extracellular enzymes produced by S. mutans that catalyze the formation of glucan and fructan, respectively.20,24 The proteins binding the glucans on the surface of S. mutans also contribute to the formation of the biofilm.25 Koo and colleagues,26 using hydroxyapatite surfaces pretreated with glucans, found that cranberry juice significantly blocked the adhesion of S. mutans to glucan binding sites.

In summary, the polyphenols in cranberries may influence the formation of dental caries by affecting the colonization of dental surfaces and the production of acids by cariogenic bacteria (Table 1).

The colonization of subgingival sites by periodontopathogenic bacteria is an essential stage in the initiation of periodontal disease. The capacity of these bacteria to form a biofilm and adhere to host tissues therefore plays a major role in periodontitis.2 The NDM fraction of cranberries inhibits the formation of biofilm by Porphyromonas gingivalis27and Fusobacterium nucleatum,28 2 species of bacteria associated with chronic periodontitis. The NDM fraction may also inhibit the adhesion of P. gingivalis to various proteins, including type I collagen,27 and may reduce bacterial coaggregation involving periodontopathogenic bacteria.23

The strong proteolytic activities of the red complex bacteria described by Socransky and colleagues17 (i.e., P. gingivalis, Treponema denticola and Tannerella forsythia) are important in the destruction of periodontal tissue. Bodet and colleagues29 reported that the NDM fraction in cranberries inhibited the proteolytic activities of all 3 species. More specifically, the polyphenols acted on the gingipain activity of P. gingivalis, the trypsin-like activity of T. forsythia and the chymotrypsin-like activity of T. denticola. These observations suggest that the NDM fraction has the potential to limit the multiplication of these bacterial species in periodontal pockets by limiting the availability of the amino acids and peptides on which their growth depends; it may also reduce the destruction of tissues mediated by the action of bacterial proteinases.

Following attack by periodontopathogenic bacteria, the host cells' continuous, uncontrolled production of proinflammatory cytokines, including interleukin-1β and tumour necrosis factor α, contributes significantly to the destruction of the tooth-supporting tissues.18 Bodet and colleagues12 found that the NDM fraction of cranberries inhibited the production of these proinflammatory cytokines by host macrophages following their stimulation by the lipopolysaccharides of recognized periodontopathogens, including Aggregatibacter actinomycetemcomitans, F. nucleatum, P. gingivalis, T. denticola and T. forsythia. In another study, the same group used a gingival fibroblast model and reported similar effects of the NDM fraction.30 The constituents of cranberry seem to act by inhibiting cellular signalling proteins, leading to a reduction in the regulation of activator protein 1 (AP-1), an important transcription factor for the genes coding for proinflammatory mediators.

Several studies have supported the premise that matrix metalloproteinases (MMPs) secreted by the host's cells play a key role in periodontitis. In fact, periodontal disease is characterized by a high concentration of MMPs in the gingival crevicular fluid, which leads to loss of gingival collagen, degradation of the periodontal ligament and resorption of alveolar bone.31 The NDM fraction of cranberries inhibits the secretion of MMP-3 and MMP-9 by the gingival fibroblasts and macrophages following stimulation by the lipopolysaccharides of A. actinomycetemcomitans32; it also inhibits the catalytic activity of both these enzymes and elastase. Again, the NDM fraction seems to act by inhibiting the expression and phosphorylation of various intracellular proteins involved in the activation of AP-1 within the fibroblasts.32 The polyphenols in cranberries also have the potential to reduce the destruction of tooth-supporting tissues by inhibiting the activity of hydrolytic enzymes secreted by the host's cells.

In summary, the polyphenols of cranberries can act simultaneously on various therapeutic targets (Table 1), which suggests interesting potential avenues for controlling and preventing periodontitis.

The polyphenols of cranberries, specifically the proanthocyanidins in the NDM fraction isolated from cranberry juice, appear to have potential for preventing and/or treating dental caries and periodontal disease. However, results obtained in vitro are difficult to transpose to the in vivo situation, since the oral environment could interfere with the biological properties of these molecules. Aside from the study by Weiss and colleagues,23 who demonstrated that a polyphenolic fraction integrated into a mouthwash led to a significant reduction in S. mutans, no clinical studies involving substantial numbers of participants have been conducted. Clinical studies in this area are therefore warranted.

It is unlikely that the consumption of cranberry juice on its own can benefit oral health, given the insufficient contact time between the oral tissues (the teeth and gingiva) and the cranberry polyphenols. In addition, the sugar that is added to cranberry drinks, as well as the acidity of these beverages, may have the counterproductive effect of contributing to the demineralization of tooth enamel. Studies to isolate and characterize the bioactive molecules in cranberry extracts are therefore necessary. These molecules could then be integrated into oral hygiene products, which could be tested for their potential benefits in preventing oral diseases. In addition, localized application of these bioactive substances to diseased periodontal sites, through irrigation or insertion of a resorbable fibre, could allow for modulation of the host response through inhibition of the enzymes that destroy the extracellular matrix and attenuation of the virulence of the periodontopathogens. In such situations, cranberry polyphenols could allow reductions in the use of antibiotics, thereby preventing the development of bacterial resistance.

Acknowledgements: Funding for the cranberry research undertaken in Dr. Grenier's laboratory was provided by the Canadian Institutes of Health Research and the Cranberry Institute.