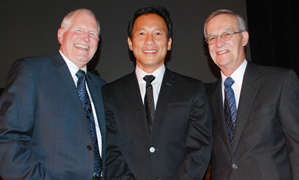 Mr. Ross McIntyre, executive director of the Manitoba Dental Association (MDA), received honorary membership to the University of Manitoba Dental Alumni Association at a ceremony held in Winnipeg in September. At the gala, Drs. Michael Lasko and Phil Poon of Winnipeg were co-recipients of the Alumni of Distinction award for dentistry, while Ms. Harriet Rosenbaum received an award for dental hygiene. 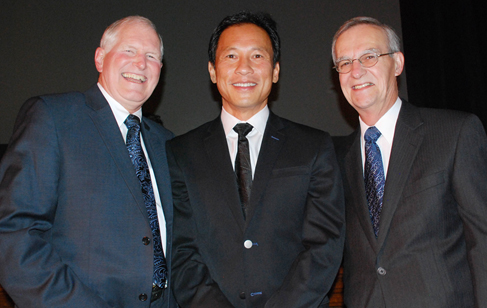 All award recipients have a long history of contributions to the local and national oral health care community. Mr. McIntyre has served as executive director of the MDA since 1968. Among the numerous awards that he has earned over his more than 40 years of service to the dental profession, Mr. McIntyre was the recipient of CDA’s Distinguished Service Award in 1992. Dr. Lasko also received the Distinguished Service Award from CDA in 2004. Dr. Poon has been actively involved with the national association and has served as chair of CDA’s Government Relations and Public Advocacy Committee since 2004.

The Alumni Association, in conjunction with the faculty of dentistry and the school of dental hygiene, presented its awards during the university’s homecoming weekend celebrations. The alumni gala included a surprise announcement from Dr. Blake Sinclair, senior stick of the University of Manitoba Class of 1995, who pledged $123 000 as a legacy gift to the institution.

“We decided that we wanted to say ‘thank you’ for the opportunities that the school has afforded us, for the excellent foundation of education and support,” said Dr. Sinclair.

The faculty also announced the beginning of a major fundraising drive for the Ross McIntyre Digital Imaging Centre that will feature state-of-the-art technology for oral health imaging and patient records.

For more information on the campaign, please email info_dent@umanitoba.ca