What dose of epinephrine contained in local anesthesia can be safely administered to a patient with underlying cardiac disease during a dental procedure? 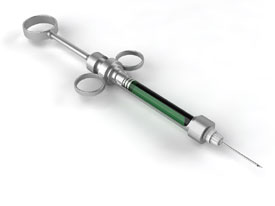 Epinephrine is commonly used in health care and has multiple applications. Two frequent and often life-saving uses are the management of anaphylaxis and cardiac arrest. The word has a Greek origin and literally means “on” (epi) the “kidney” (nephros) referring to the anatomic location (the adrenal gland) where the drug is produced. Confusion still exists regarding the dose limits for epinephrine, particularly when the drug is administered to patients with underlying cardiovascular disease.

Epinephrine was first added to the local anesthetic ester, procaine, over 100 years ago. Like the no-longer-used procaine, all currently available dental local anesthetics in North America cause some degree of vasodilation. This vasodilatory effect poses several problems for the clinician: bleeding is noted at the site of injection; absorption of the anesthetic into the blood stream is rapid, shortening the duration of effect; and the rapid absorption results in higher, potentially dangerous, plasma levels. To overcome these disadvantages, a vasoconstrictor is added to most local anesthetics, with epinephrine being the most common.

The Effects of Epinephrine

The physiologic effects of epinephrine are numerous, as it is responsible for the “fight or flight” response seen in all animals including humans. The variation in response depends in part on the number and predominant type of adrenergic receptors present in the target organ and on the physiologic reflex response that attempts to minimize the effects of sympathetic stimulation.

As an adjunct to anesthetic, the effect this drug has on heart rate, stroke volume, cardiac output, heart rhythm, myocardial oxygen demand and peripheral vascular resistance must be appreciated. Epinephrine’s effect on blood pressure depends on the dose and route of administration. Small doses or doses administered subcutaneously may result in little or no change in blood pressure. This is often due to the combination of a slight elevation in systolic pressure and a lowering of diastolic pressure, resulting in little change in mean arterial pressure. Larger doses, particularly when given intravascularly, can cause a rapid elevation in blood pressure due primarily to peripheral vasoconstriction. Epinephrine increases heart rate and the force of ventricular contraction, which ultimately increases cardiac output. The elevation in cardiac workload increases myocardial oxygen consumption. This is a concern in an individual suffering from cardiac disease, particularly given that the beneficial coronary vasodilatory effect of epinephrine is diminished or absent in the presence of coronary vessel atherosclerosis. A further risk to the cardiac patient is the ability of epinephrine to irritate cardiac pacemaker cells and cause dysrhythmias. Thus, the injudicious use of epinephrine can be harmful to a patient with cardiac disease.

A history is crucial in determining which cardiac patients are at particular risk during a dental procedure. Patients with unstable coronary syndrome (unstable angina, recent myocardial infarction [MI]), decompensated heart failure, significant dysrhythmia or severe valvular disease seem to be at particular risk from the effects of epinephrine. For these patients, elective dental treatment should be postponed until their cardiac status has been medically or surgically optimized. Traditionally, a 6-month wait following an MI was recommended before proceeding with noncardiac elective surgery to minimize the risk of perioperative re-infarction and death. This recommendation was adopted by dentistry even though the myocardial demands and stress of dental procedures are thought to be considerably less than those associated with the orthopedic, abdominal and thoracic procedures for which the guidelines were developed. More recently, a 4- to 6-week wait following an MI has been suggested as adequate when risk factors, such as smoking, hypertension and dyslipidemia, are controlled and recent stress testing has not indicated residual myocardium at risk.1

For patients determined to be medically capable of undergoing general dentistry, pain control is essential, particularly in those with cardiac disease. Pain and other stressors can result in a dramatic endogenous release of epinephrine and norepinephrine, which can affect the diseased heart deleteriously. Although the importance of good local anesthesia technique cannot be overemphasized, the addition of epinephrine to local anesthetics improves both the depth and duration of anesthesia. Thus, the use of some exogenous epinephrine is beneficial in this group of patients, but what is a safe dose in this at risk population? One of the most frequently quoted suggestions is that of Malamed2 who recommended a maximum dose of 40 µg epinephrine per dental appointment in this patient population.

Unfortunately, no current recommendation regarding the maximum amount of epinephrine that can be safely administered to a cardiac patient undergoing dentistry is based on sound scientific evidence. Given the population and the risk of an untoward event, ethical considerations likely preclude a study to obtain such evidence.

Nevertheless, research has demonstrated that the administration of local anesthesia containing epinephrine does affect the heart. For patients requiring emergent dental care who suffer unstable cardiac disease (recent MI, unstable angina, certain dysrhythmias, significant valvular disease, decompensated heart failure), epinephrine should be minimized and used with caution. These patients are best managed by people specifically trained in their assessment, monitoring and management. For patients with “stable” cardiac disease, it is still prudent to administer a minimal amount of epinephrine while always avoiding intravascular injections. Although pain control is of paramount importance, the potentially deleterious effect of epinephrine can be minimized by limiting the amount to 40 µg. There is no evidence to support exceeding this dose for such patients. This amount is contained in 2 cartridges of 1:100 000 or 4 cartridges of 1:200 000 (there is little benefit from using the 1:100 000 concentration of epinephrine for routine dentistry).3 Although the half life of epinephrine is short, exceeding 40 µg epinephrine per appointment cannot be recommended unless the patient’s cardiac status is monitored continuously during the procedure.