A Diagnostic Puzzle in a Case Featuring Gross Gingival Enlargement

A 35-year-old woman reported to our hospital complaining of swollen gums during the previous 2 months, associated with bleeding when she brushed her teeth. She had a history of weakness and fatigue over the last week, although her medical history revealed nothing relevant and she was not on medication for any chronic illness. Physical examination of the patient showed signs of anemia.

Oral examination of the patient demonstrated gross enlargement of the gingiva (Fig. 1). Generalized diffuse enlargement of the gingiva on the buccal, lingual and palatal aspects of all teeth was apparent (Fig. 2). Enlargement was greater in the anterior than the posterior regions of the jaws. The gingiva appeared pale pink and lobulated, with loss of stippling (Fig. 3). On palpation, the swelling was firm and bleeding occurred on probing. Further examination of the oral cavity showed bleeding from 2 pinpoint spots on the buccal mucosa at the occlusal level. Plaque control was inadequate. 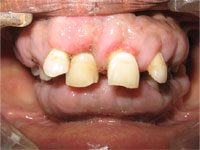 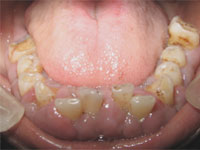 Figure 2: Labial and lingual enlargement of the mandibular gingiva. 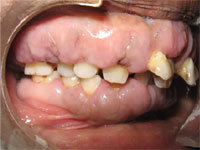 Figure 3: Bulbous, pale pink appearance of the gingiva in the posterior region.

What is the diagnosis?

Gingival enlargement may be caused by poor oral hygiene, medications, serious systemic illnesses, hematologic disorders and genetic conditions, or it may be idiopathic.

Inflammatory: Inflammatory gingival enlargements are characterized by swelling or edema, redness and a tendency to bleed on periodontal probing. Longstanding inflammatory enlargements may have a fibrotic component. The primary local factor associated with these enlargements is plaque.

Drug-induced: Fibrotic gingival enlargements resulting from medication are pink, firm and lobulated. This condition frequently presents as a generalized, irregular enlargement of the attached and marginal gingiva on both facial and lingual aspects. Various sorts of drugs (immunosuppressants, anticonvulsants and calcium channel blockers) may be responsible. A diagnosis of drug-induced gingival enlargement can be made if enlargement coincided with administration of one of these medications.

Conditioned: Hormonal changes occurring during pregnancy and puberty cause generalized gingival hyperplasia, as altered tissue metabolism accentuates the response to local irritants. During pregnancy, the increase in both progesterone and estrogen levels induces changes in vascular permeability leading to gingival edema and an increased inflammatory response to dental plaque.

The enlargement is usually generalized and tends to be more prominent interproximally than on the facial and lingual surfaces. The enlarged gingiva is bright red or magenta, soft and friable, with a smooth, shiny surface. Bleeding occurs spontaneously or on slight provocation. Although spontaneous reduction in the enlargement is common after the pregnancy, complete elimination of the residual inflammatory lesion requires the removal of all plaque deposits and factors that favour their accumulation.

When enlargement is caused by vitamin C deficiency, the gingiva is bluish red, soft and friable with a smooth, shiny surface. Hemorrhage, occurring spontaneously or on slight provocation, and surface necrosis with pseudomembrane formation are common features.

Systemic conditions: Gingival infiltration associated with leukemia produces generalized swelling of gingiva that, clinically, mimics that of inflammatory origin. Typical oral findings with acute leukemias include gingival hyperplasia, oral ulceration, spontaneous gingival bleeding, petechiae, mucosal pallor, herpetic infections and candidiasis. Acute myeloid leukemia (AML) is the most serious condition associated with gingival enlargement. In patients with AML, signs and symptoms of bone marrow failure, such as ecchymoses, night sweats, recent infections and lethargy, can accompany the gingival enlargement. A full blood count is a simple and useful test in these circumstances and can lead to a prompt diagnosis. In an extensive review by Dreizen and colleagues, gingival hyperplasia was observed in AML in 3%–5% of patients receiving anti-leukemia chemotherapy (n = 1076).

Rarely, systemic conditions, such as Crohn disease, Wegener granulomatosis and sarcoidosis, are associated with gingival enlargement. The gingiva in such cases is pink, firm and almost leathery in consistency, with a characteristic minutely pebbled surface. Signs and symptoms of these conditions must be actively sought in such patients.

A fibrotic gingival enlargement that does not seem to be drug induced or familial may be neoplastic or a secondary inflammation. Although there are several etiologies for gingival overgrowth, each usually has specific characteristics. However, inflammation induced by the presence of plaque and local irritants can mask characteristic features. If a definitive diagnosis cannot be established from the patient history and clinical examination, a biopsy specimen and hematologic examination may be required.

Our case resembled fibrotic gingival enlargement; the patient appeared healthy and had no family or medication history indicating a cause for the condition. Idiopathic gingival fibromatosis seemed to be the most suitable diagnosis based on clinical findings.

This case was of clinical interest because of the extent of tissue proliferation in both the arches. In addition, the resemblance of the lesions to fibrotic enlargement might have led to misdiagnosis.

A prompt diagnosis of leukemia allowed for the introduction of specific chemotherapy in this life-threatening disease. Gingival enlargement may be the presenting sign in AML, and dentists should be alert to this possibility.