Why do some people get dizzy in the examination chair? 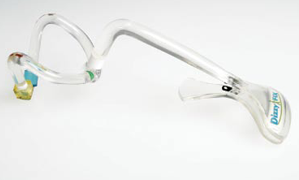 Dizziness isn't the kind of thing that most dentists are worried about; however, they probably see it often in their practices.

Recently, a 66-year-old patient—we'll call her Mary—was referred to me with dizziness, which she first noticed during a semi-annual dental visit. As Mary lay back in the examination chair and turned her head toward the assistant, her entire world began to swim. She described a sensation of falling out of control for several seconds before things came back into focus and she could again see. The sensation left Mary nauseated, shaken and confused about what had happened. It occurred several more times that day, whenever she moved into certain positions. Mary later attended the emergency room for further investigation, as she was afraid she had had a stroke.

The emergency doctor diagnosed Mary with the most common form of vertigo related to the inner ear: benign paroxysmal positional vertigo (BPPV). Mary was told that BPPV occurs in nearly 1 in 10 people over the age of 60. She also learned that BPPV is characterized by short episodes of spinning dizziness that can be brought on by position changes, such as rolling over in bed or lying down quickly—lying down in a dental chair, perhaps.

The disease itself is caused by small calcium crystals (otoconia) which occur normally, but have found their way into the wrong part of the inner ear: the posterior semi-circular canal, to be specific (Fig. 1).1 These crystals likely come loose and migrate for one of several reasons, including age-related changes to the inner ear, inner ear infections and head trauma. When a person with BPPV moves in certain ways or lies down quickly, these collected crystals are disturbed and cause vertigo.

Aside from its characteristic symptoms (Box 1), BPPV can be definitively diagnosed by recognizing specific signs that occur during an attack of vertigo. Twitching eye movements, called nystagmus, can be observed during the most intense phase of vertigo experienced by a patient. The eyes literally twist rhythmically and make it difficult for patients to see during an episode. 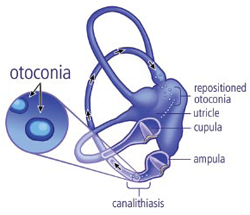 Figure 1: Otoconia present within the posterior canal of the vestibular apparatus. 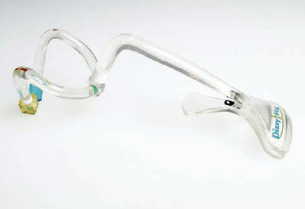 Recently, an unusual cure for BPPV has been developed. Treatment involves moving the patient's head and body in certain ways, causing the displaced calcium crystals to migrate back to the part of the inner ear where they no longer cause vertigo. This Epley manoeuvre or particle repositioning manoeuvre, described in 1992, has become the standard of care for BPPV.2 Most neurology or ear, nose and throat physicians perform the manoeuvre on a regular basis with good success.3

However, BPPV is a chronic condition, with up to 50% of patients experiencing recurrences even after being treated effectively.4 As a result of these frequent recurrences, home treatment has become a practical option.5,6 A new medical device called the DizzyFIX (Clearwater Clinical Limited, Calgary, AB; www.dizzyfix.com) is now approved for use in Canada and the United States (Fig. 2).7,8 The device guides patients with BPPV through the particle repositioning manoeuvre to achieve successful treatment. Other options for treatment of recurrent BPPV include return visits to a physician, vestibular physiotherapy or, in rare cases, surgery.

As the population ages, BPPV is becoming a much more common ailment. All medical professionals should be able to recognize this debilitating disease and refer or treat patients as appropriate. If a patient experiences vertigo while in the examination chair, there's a good chance the cause is BPPV.

Dr. Bromwich is the chief executive of Clearwater Clinical Ltd. He was involved in the original research to develop the DizzyFIX, a treatment device for BPPV.