Dr. Ronald Smith: At the Helm of CDA 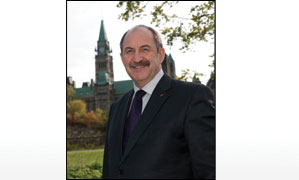 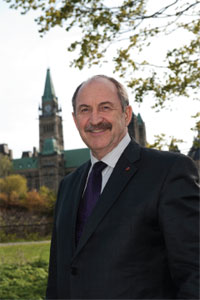 In competitive sailing, success depends on all members of the ship’s crew working in harmony toward a common goal. This requires crew members to be nimble, moving from position to position to provide support where it is needed most. Dr. Ronald Smith, CDA’s new president, has years of experience as a member of sailing crews. He notes the parallels between the sailing world and organized dentistry in Canada, which has endeavoured in recent years to achieve greater unity among its stakeholders. CDA and the provincial and territorial dental associations have worked in sync as members of the same crew, each using its respective strengths and abilities to ensure a successful voyage.

A History of Involvement

Dr. Smith’s involvement in organized dentistry began from his earliest days at the University of Alberta dental school. “A classmate pushed me forward for class president on day one, and this piqued my interest in how this side of the profession operated,” he remembers. Dr. Smith rose through the ranks of student politics and went on to serve as president of the Dental Undergraduate Society.

During his time at dental school, Dr. Smith joined the Canadian Armed Forces. What was initially thought of as a way to help finance his studies turned out to be a rewarding experience. “I made lifelong friends in the communities I served and in the military,” recalls
Dr. Smith. “The travel involved also gave me an awareness of and appreciation for other areas of the country.”

He held military appointments in Cornwallis, Nova Scotia, Trenton, Ontario, and Victoria, B.C., before retiring from military service at the rank of major. His final placement in Victoria brought Dr. Smith to the Cowichan Valley area of Vancouver Island and to the town of Duncan. Here he would establish a dental practice in 1979, and along with wife Mary Kae, they would raise 2 children, Adam and Carla.

Coaching Adam’s minor hockey team led Dr. Smith to play a significant role in hockey management. When a new hockey facility was built in Duncan, Dr. Smith and some fellow hockey fathers used the opportunity to help launch the Cowichan Valley Capitals Junior A hockey team. “Since the construction of the arena was supported through municipal taxes, we saw this as community service and a way to put money back into the area while also helping out young people,” he explains.

Aspiring local hockey players benefited from the creation of the team and went on to gain scholarships. In addition, many young people in the region were employed at the arena itself. Until last year, Dr. Smith had served as team president since its inception in 1992. In 2004 he was named Executive of the Year of the BC Hockey League.

From Process to Progress

Dr. Smith is someone who tries to make a positive contribution to the organizations he becomes involved with. He has demonstrated a remarkable level of commitment within organized dentistry at the local, provincial and national levels. His involvement with the College of Dental Surgeons of British Columbia (CDSBC) began in the early 1980s, and over the course of almost 30 years of service, he took on many roles, including treasurer and president. His work on various committees of the CDSBC and the British Columbia Dental Association (BCDA) is extensive and includes 12 years as chair of the BCDA Economics Committee.

First elected to CDA’s Board of Governors in 1987, Dr. Smith has an equally impressive track record at the national level. Among other duties, he has chaired CDA’s Competition Working Group and the Dentistry Canada Fund. All of these experiences have given him insight as to what is required for success in organized dentistry—teamwork, cooperation and commitment.

Most recently, Dr. Smith helped with the development of a memorandum of understanding on a new membership and governance model signed by CDA and its corporate members. Effective January 1, 2011, CDA will move to a federation model, exclusively serving the needs of its corporate members (namely the provincial and territorial dental assocations), who in turn will serve their individual dentist members. “We had a lot of debate and deliberation among all parties in order to come to an agreement on various issues,” he notes. “But now we are ready for 2011.”

Dr. Smith feels there is a genuine sense of optimism among all the players in organized dentistry, which is translating into new ways of working together. “We’re ready to move ahead,” he says. “We’ve been through the process and now we are looking to make progress on many important projects that lie ahead.” Moving from process to progress will be a guiding principle during Dr. Smith’s tenure as CDA president. “Under the new membership model there will be a greater opportunity to advance professionalism and the oral health of Canadians by working more collegially than ever before,” he says.

Dr. Smith cites the supplement on oral health that appeared in the Globe and Mail in May as a prime example of the new level of cooperation that’s been achieved. Here, the provinces shared content and advertisements with CDA and this material was presented under the CDA brand. “It was wonderful to see this happen, which could only have come about based on the generosity of our corporate members,” he emphasizes. 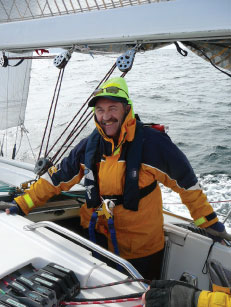 Dr. Smith’s passion outside of dentistry remains his love of sailing. He has participated in many long-distance yacht races, including one that took him from Victoria, BC, to Maui, Hawaii. This race, 2300 nautical miles long, can take anywhere between 13 to 18 days to complete, depending on the weather and direction of the winds. Although primarily in charge of navigation duties during these races, Dr. Smith was often called upon to do a bit of everything along the journey, taking turns as the helmsman, cook or cleaner. Although he has no immediate plans for more long-distance racing, he still enjoys sailing in local waters.

It will be all hands on deck in the coming year at Dr. Smith’s dental practice in Duncan as he  fulfills the requirements of his CDA presidency. His hectic travel schedule will include visits to many of the provinces as well as a trip to Brazil in September for the FDI World Dental Congress. Dr. Smith has attended previous FDI Congresses and was proud to represent Canadian dentistry on the world scene.

“Canada is viewed with respect at this event and we are seen as contributors to solutions on oral health issues,” he says. “When I meet dentists from other countries and find out about their challenges, it highlights for me our obligation to help by taking a leading role in FDI.”

It is this sense of giving back that keeps Dr. Smith motivated. “I do like to get involved in many different spheres,” he concludes. “I feel that dentistry has given me and my family a very nice life, so I am quite happy to give back to the profession and to the community.”

Sean McNamara is writer/editor at the Canadian Dental Association.