CDA presented some of its 2009 awards during ceremonies held in Ottawa in April 2010.

Dr. Burton Conrod of Sydney, Nova Scotia, was presented with the first
ever CDA Medal of Honour. This award, which was created specifically to
honour Dr. Conrod's lifetime of service to the profession, recognizes outstanding
service, leadership and humanitarianism at the local, provincial, national and
international levels. Dr. Conrod's tireless work as a passionate advocate for oral
health on the global stage culminated with his appointment as president of the
FDI World Dental Federation in 2007–09. 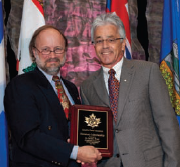 Dr. David Sweet of Vancouver was the recipient of CDA's Honorary Membership,
an award that recognizes an individual who has made an outstanding contribution to
the art and science of dentistry or to the profession over a sustained period of time.
Dr. Sweet is a mentor, teacher, researcher and innovator in forensic dentistry. He has
built a global reputation as an authority in his field, especially in the areas of forensic
identification and forensic DNA evidence.

CDA's Distinguished Service Award recognizes an individual who has made an outstanding contribution to the profession in a
given year or over a number of years. This year, 3 recipients received this award: Dr. James Leake of Kingston, Ontario, Dr. Robert
Sexton of Corner Brook, Newfoundland, and Dr. Peter Stevenson-Moore of Vancouver.

His efforts resulted in the creation of a comprehensive curriculum for undergraduate students along with a graduate program that has provided Canada with public health specialists. A respected teacher and mentor, Dr. Leake has influenced almost 2 generations of dentists and dental specialists in Canada and abroad.

Dr. Robert Sexton has played a leadership role within the profession and the Newfoundland dental community for over
40 years. He has served on several provincial dental committees, including the Newfoundland and Labrador Dental Association
(NLDA) Executive Committee. He was president of NLDA in 1973–74. Dr. Sexton also served as chair of the NLDA annual general
meeting for 20 years.

At the national level, Dr. Sexton served on the CDA Board of Governors, Executive Council and Board of Directors for over 10 years. He also served on the CDSPI Board from 1988 to 1995 and on the CDA Committee on Insurance and Investment from 2000–02.

Dr. Peter Stevenson-Moore has been a leader in the prevention and management of the oral complications of cancer and
cancer treatment for more than 30 years. His involvement with the BC Cancer Agency (BCCA) resulted in the creation of a department
of oral oncology and dentistry within the BCCA. Under Dr. Stevenson-Moore's leadership, this department has set standards for
cancer treatment and research and serves 5 cancer centres in BC.