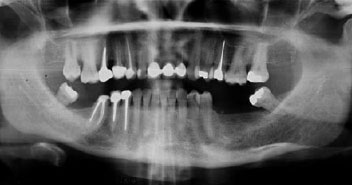 Cite this as: J Can Dent Assoc 2010;76:a9
Topics:
treatment / orthodontics / restorations

If a posterior tooth has been lost and is not restored immediately, the patient may subsequently experience a variety of problems. The adjacent teeth tend to tilt and rotate, and the opposing tooth may overerupt. Available options to restore occlusion include elective root canal treatment with invasive tooth reduction, surgical impaction or orthodontic therapy requiring extraoral headgear or full-arch braces to reinforce anchorage.1-4 Unfortunately, these treatments may be inconvenient and they are not always as effective as desired, since the loss of anchorage is always evident. To avoid lengthy and unpredictable treatment, many restorative dentists prefer to perform elective root canal treatment followed by aggressive tooth reduction to restore the occlusal plane. However, the advent of titanium mini-screws has enabled orthodontists to use the skeletal anchorage to overcome these problems.5-11

Skeletal anchorage involves placing temporary orthodontic anchorage devices, in the form of mini-screws, into the bone and using them for absolute anchorage.12,13 Of the various implants available, temporary anchorage devices are widely used because they are relatively simple to insert, and force can be applied almost immediately.14 Other advantages include fewer limitations at the implant site, no need for patient compliance and lower cost than other types of implant. Temporary anchorage devices are used for a variety of purposes in orthodontics, including space closure, treatment of an open bite and uprighting of the posterior teeth.2-4,10,12,13,15

A 44-year-old woman was referred from the restorative department of the King Abdulaziz University (Jeddah, Saudi Arabia) for intrusion of
the maxillary molars to facilitate restoration of the lower first molars (Fig. 1).

Lateral cephalometric analyses showed that the patient had a Class I skeletal relationship with an acceptable profile (Fig. 3, Table 1). The right and left canines were in a Class I relationship, the overbite was 40% and the overjet was 3–4 mm (Fig. 4).

Table 1 Cephalometric measurements of the patient described in this case 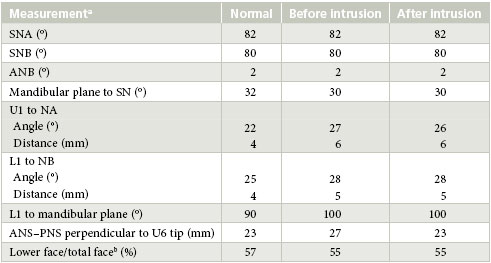 It was decided to undertake intrusion of the upper right and left first molars using 4 temporary orthodontic anchorage devices to facilitate restorative treatment of the lower right and left molars. Four temporary anchorage devices, 6 mm in length and 1.6 mm in diameter with long transgingival part, were used (OrthoEasy system Forestadent, Pforzheim, Germany). Two of the devices were placed between the upper right first and second molars on the buccal side and mesial to the upper first molar on the palatal side. The other 2 devices were placed between the upper right first molar and second premolar on the buccal side and between the first molar and the second premolar on the palatal side. These positions were chosen to facilitate the required intrusive movement. One operator (KHZ) placed all of the devices.

About 0.5 mL of local anesthetic (2% xylocaine with 1:100 000 epinephrine) was administered by infiltration before placement of the temporary anchorage devices. Buttons (Rocky Mountain Orthodontics Inc, Denver, CO) were bonded to the buccal and palatal surfaces of the upper first molars (Fig. 5). The temporary anchorage devices were immediately loaded with 100 g of intrusive force using a closed elastic power chain (Rocky Mountain Orthodontics Inc). The power chain was activated every 2 weeks. After 3 months, the upper left buccal device was partially covered with an overgrowth of soft tissue; at this point, 0.012-in. ligature wires were engaged to the device and bent to make a hook over which the power chain could be attached (Fig. 5b). 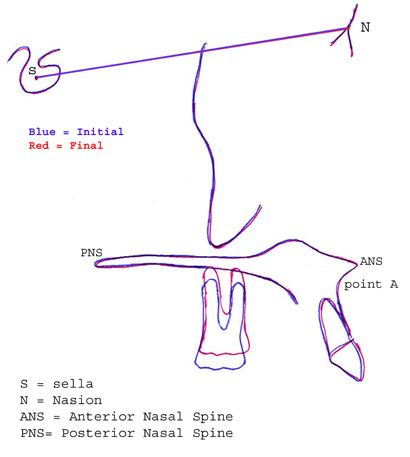 After 6 months of orthodontic treatment with the 4 upper temporary orthodontic anchorage devices, functional occlusion was established in the right and left posterior dentition through 4-mm intrusion of the upper first molars (Fig. 6, Table 1). This created adequate space to restore the opposing edentulous spaces (Fig. 7 and 8). For retention, a 0.018-in. stainless steel wire was bonded to the buccal surfaces of the intruded teeth to the second molars on both sides (Fig. 6a and 6c).

For the patient described in this case, successful orthodontic intrusion was achieved but this would not have been possible without the use of temporary anchorage devices as a means of absolute anchorage. Furthermore, using these devices prevented the potential adverse effects of conventional orthodontics, such as extrusion of adjacent teeth.

There is no agreement in the literature on the optimum force to be used for intrusion. Some authors suggest forces ranging from 15 to 50 g,16-18 whereas others have recommended using greater force for intrusion (150 to 500 g).10,19,20 Andreasen and Bishara21 suggested using 40% more than the optimal force when the elastic is first applied, to compensate for the loss of force that occurs at the outset. Therefore, the clinicians in the case reported here started with a force of 100 g, knowing that 40% of this force would be lost within the first 24 hours. The power chain was activated bimonthly to maintain constant application of force.

One technique for performing this intrusion, which has been used by a number of clinicians, is to pull the power chain from one temporary anchorage device to the other across the occlusal plane. However, this method has several drawbacks, including tearing, slippage of the power chain over the occlusal surface and lack of proper control to direct the forces through the centre of resistance. Therefore, in this case the power chains were run from each temporary anchorage device to bonded buttons to control the intrusive force. Another advantage of the method used here was that only the extruded teeth were bonded with attachments. Furthermore, the position of the bonded buttons played an important role in directing the force through the centre of resistance, thus producing the required bodily movement. Radiographic examination revealed that the quality of bone distal to the first molar was insufficient on the upper left side; therefore the temporary anchorage device was placed mesial to the first molar. Placing both devices mesially would have resulted in uneven intrusion of the first molar (i.e., more mesial). For that reason, the buttons were bonded to the distal half of the palatal surface to help direct the force through the centre of resistance of the tooth.

Temporary anchorage devices have significant advantages; however, their placement is technique-sensitive and carries some risks. Potential complications include root injuries, loss of tooth vitality, osteosclerosis and dentoalveolar ankylosis.22,23 Furthermore, there is a chance that the nerve will be injured during placement in the maxillary palatal slope, where the greater palatine foramen is located.24,25

Cephalometric superimposition registered on the palatal plane (between the anterior and posterior nasal spines), which was used to compare the initial and final cephalographs, showed that the first molars had been intruded by 4 mm in 6 months (Figs. 9 and 10, Table 1).

This case demonstrated that substantial intrusion of the maxillary molars could be achieved in a well-controlled manner by using only temporary anchorage devices without fixed orthodontic appliances to create adequate vertical clearance for restorations. With these devices, well-controlled force (in terms of both direction and magnitude) can be obtained for successful orthodontic intrusion of the molars.

Acknowledgement: The authors would like to acknowledge an orthodontic icon, the late Professor Anthony A. Gianelly.

Reference 5 was missing from the reference list when this article was originally published in JCDA Volume 76, Issue 1. This reference has now been added to the online version. JCDA regrets the error.