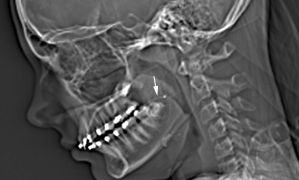 Trismus caused by a foreign body has only rarely been documented in the literature. In the case reported here, trismus was one of an unusual combination of symptoms in a pediatric patient. Imaging revealed that the trismus was a complication related to the presence of a foreign body. This case highlights the importance of considering a broad differential diagnosis and performing a thorough workup for patients with unusual symptoms.

A 13-year-old female patient presented to the otolaryngology clinic with a 7-day history of otalgia, pharyngitis and trismus. However, she had no fever, dysphagia, dyspnea, anorexia or viral prodrome. The patient was otherwise well and was not taking any medications. Her previous medical history was noncontributory.

The results of an otologic examination were normal, as were the results of anterior rhinoscopy. Inspection of the oral cavity revealed moderate swelling without erythema over the retromolar trigone. The tonsils were not enlarged, and no cellulitis was present. Orthodontic wires were noted and were found to be in place. These wires had been adjusted within the past 2 months. The patient had no history of temporomandibular joint dysfunction. However, moderate left cervical adenopathy was observed.

Infection of the deep neck space was considered, but the results of a complete blood count and differential white cell count were normal. Contrast-enhanced computed tomography (CT) of the head, which was ordered to rule out abscess and malignancy, revealed diffuse swelling in the pterygoid muscles and fat stranding in the parapharyngeal space. Careful examination of the parapharyngeal space revealed a linear opacity extending from the second left maxillary molar to deep into the pterygoid musculature. The appearance of this opacity was consistent with a migrated brace wire, and this foreign body appeared to be the cause of the inflammation and associated trismus (Figs. 1a–1d).

Exploratory incision and examination confirmed the presence of a brace wire, which was removed. The inflammation subsided quickly, and the patient was able to resume oral feeding within days. 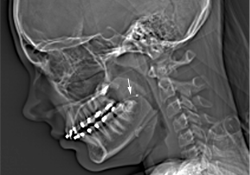 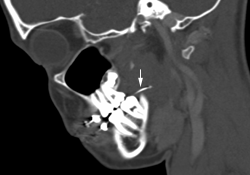 Figure 1b: Sagittal CT of the head showing linear opacity (arrow) extending from the second left maxillary molar to deep into the pterygoid musculature. 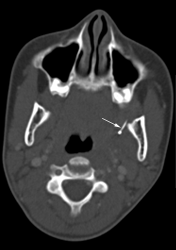 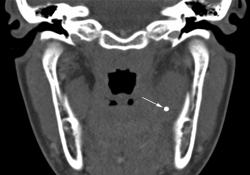 Figure 1d: Transverse CT of the head at a higher level. The end of the brace wire appears as a small circular opacity (arrow).

This case involved an unusual presentation of complications due to migration of an orthodontic archwire. Although the problem was eventually determined to be benign, the unique presentation raised the suspicion of abscess or malignancy. On occasion, orthodontic archwires have become dislodged and have migrated as far as the nasal cavity without causing any symptoms.1 However, only a few cases of migrating foreign bodies causing trismus have been reported.2

This case reinforces the need for consideration of a broad differential diagnosis and a complete workup of unusual symptoms. During re-examination of the patient after the CT imaging, it was not possible to visualize the brace wire entering the tissue, because the mucosa had become swollen, covering the last brace anchor. Appropriate imaging facilitated rapid diagnosis and treatment of this patient.