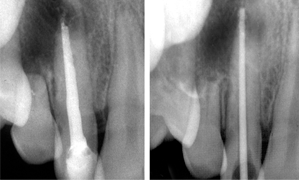 Inflammatory root resorption is a pathologic condition caused by several etiologic factors including traumatic dental injury. In this case report, we describe treatment of a maxillary lateral incisor affected by severe, perforating inflammatory root resorption. An 11-year-old patient presented with a previously traumatized, root-filled maxillary lateral incisor associated with pain, mobility and a sinus tract. Radiographic examination revealed a large periradicular lesion involving pathologic resorption of the apical region of the root. After removal of the root canal filling, the tooth was treated with intracanal calcium hydroxide for 2 weeks. The calcium hydroxide dressing was then removed and the entire root canal was filled with mineral trioxide aggregate. The endodontic access cavity was restored with composite resin. After 1 year, advanced osseous healing of the periradicular region had occurred and no clinical symptoms were apparent.

Inflammatory root resorption (IRR) is a pathologic condition that leads to progressive loss of root structure.1-4 IRR is commonly caused by apical periodontitis3,5 and traumatic injuries,4,6-8 although a variety of other etiologic factors, including expanding tumours and cysts5 and excessive orthodontic forces,9 may also initiate the condition. In some cases, IRR may be associated with idiopathic factors.10,11 Because IRR is asymptomatic, it may extend to significant dimensions before being recognized, i.e., distinct shortening of the root tip and enlargement or perforation of the root canal may occur.1-3,5,9 Thus, except for cases induced by orthodontic therapy, endodontic treatment should be initiated promptly to prevent further hard tissue loss and root perforation.12 In advanced cases, endodontic intervention may require prior repair of the perforation site with a suitable biomaterial.13

Mineral trioxide aggregate (MTA) has been proposed as a favourable repair material, as it creates a good seal and provides excellent marginal adaptation.14 Clinical studies have confirmed the biocompatibility of this material and have shown a hard tissue inductive effect.15,16 In addition to its antimicrobial activity,17 MTA can create an environment conducive to periodontal healing, allowing new cementum growth on its surface.18 Consisting of fine hydrophilic particles, MTA can set in the presence of moisture and blood19 and can be placed in a maximum of 2 treatment sessions.20 These favourable properties render it a suitable material for the treatment of root perforations.21,22

In the following case report, we describe the clinical and radiographic condition of a previously traumatized, root-filled maxillary incisor, severely affected by perforating IRR and the results 12 months after treatment with MTA.

A healthy, 11-year-old boy was referred to the clinic with the chief complaint of pain and swelling in the buccal gingival aspect of the maxillary right lateral incisor. Reportedly, the tooth had been traumatized during an accidental fall when the boy was 9.5 years old, and emergency treatment with splints and antibiotic coverage was provided by a local dentist. Two months later, the dentist initiated endodontic treatment of the incisor as the patient was experiencing persistent pain. A year after root canal obturation, when the patient returned with pain and swelling, the dentist recommended retreatment at a university clinic.

Intraoral examination revealed a discoloured crown on the maxillary right lateral incisor, associated with a buccal sinus tract. The tooth was slightly mobile and tender to percussion. Radiographic examination of the lateral incisor showed extensive, uneven resorption of the apical region of the root, along with a large periradicular radiolucency (Fig. 1a). A very short root canal filling was observed, with its thin tip extending into the resorption cavity. When the lamina dura was traced from the mesial aspect of the root, a conical apical structure, highly suggestive of a root apex, could be identified. As radiographs acquired at the time of the diagnosis of apical periodontitis were not available, it was assumed that the local practitioner had preferred to obturate the root canal below the level of resorption or, in the possible case of a wide open apex, below the level of apical convergence.

On the basis of these clinical and radiographic findings, an endodontic retreatment plan involving intracanal placement of MTA for the treatment of IRR was proposed to the parents and patient. On approval of the plan, treatment was initiated at the same appointment. Following anesthesia and placement of a rubber dam, gutta-percha and sealer were gently removed from the root canal with Hedströem files (Dentsply-Maillefer, Ballaigues, Switzerland) and it was irrigated copiously with 1.25% sodium hypochorite (NaOCl). During instrumentation, special care was taken not to enlarge the root canal. A confirmatory periapical radiograph revealed the extent of a large, semilunar-shaped perforating resorption defect affecting the apical third of the root (Fig. 1b). After removal of the root filling, final irrigation with 1.25% NaOCl and sterile saline was carried out and the root canal was dried with sterile paper points. Calcium hydroxide dressing was placed in the canal and a temporary coronal seal was established with Cavit (3M ESPE, Seefeld, Germany). 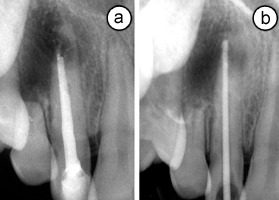 Figure 1: (a) Radiographic view of the maxillary lateral incisor showing pathologic root resorption and a periradicular lesion. (b) View of the root following removal of the root canal filling. A gutta-percha cone shows the extent of perforating inflammatory root resorption.

When the patient returned 2 weeks later, the sinus tract had disappeared and he was free of symptoms. The calcium hydroxide dressing was removed gently using ample amounts of 1.25% NaOCl and sterile saline, and the canal was dried with paper points. MTA (White Pro-Root MTA; Dentsply-Maillefer) was prepared according to the manufacturer's instructions, and a small portion of the material was deposited 1 mm below the coronal aspect of the resorption site using a ProRoot MTA delivery gun (Dentsply-Maillefer). MTA was then gently packed to the working length with an endodontic plugger. The procedure was repeated several times until the root canal was filled with MTA to about 1 mm apical to the gingival level (Fig. 2a). A wet cotton pellet was placed on the MTA and the cavity was sealed temporarily with glass ionomer cement. After an uneventful waiting period of 1 week, the access cavity was reopened and restored with hybrid resin composite (TPH Spectrum Dentsply/DeTrey Konstanz, Germany) and bonded with an etch-and-rinse adhesive (Prime & Bond NT, Dentsply/DeTrey).

At 6 months follow-up, radiography showed initiation of osseous healing in the periradicular lesion and the absence of clinical symptoms and mobility (Fig. 2b). After 1 year, the lesion had healed almost completely, demonstrating advanced regeneration of the periradicular tissue and no increase in the size of the resorption site (Fig. 2c).

Figure 2: (a) Periapical radiograph showing root canal filled with mineral trioxide aggregate. (b) Radiographic view of the tooth at 6 months and (c) 1 year. Note the extent of periradicular healing and the stability of the resorption site.

Because of the asymptomatic nature of IRR and its diverse morphological manifestations, precise diagnosis of most IRR defects cannot be made from 2-dimensional radiographs.3,23 As in the case described here, an existing root canal filling, which may be superimposed on the resorption lesion, may further complicate diagnosis from a radiographic image. Although cone-beam computed tomography (CBCT) has been shown to be significantly better in facilitating IRR diagnosis compared with periapical radiography,23 such technology was not available at our centre when the patient was admitted.

Once initial resorption has penetrated cementum and exposed dentinal tubules, toxins from bacteria present in the tubules can be transmitted to the periodontal ligament.4 This results in continuation of the osteoclastic process and associated inflammation of the periodontal ligament leading to resorption of the lamina dura and adjacent bone.1-4 Thus, the treatment protocol for IRR should involve removal of bacteria from the root canal system.1-4 Success is highly likely if a thorough disinfection protocol is employed.24,25 NaOCl is toxic at high concentrations, and there is a risk involved in rinsing teeth with perforation defects. Thus, it is advisable to use less-concentrated NaOCl to decrease the risk of toxicity.26 In the present case, 1.25% NaOCl did not cause any adverse tissue reaction, although its contact beyond the perforation site was inevitable. Following debridement of the root canal in conjunction with NaOCl irrigation, placement of short-term calcium hydroxide as an intracanal medicament is a common protocol for disinfecting the root canal system.27 This procedure removes the stimulus causing periradicular inflammation, arresting the resorptive process and, ideally, allowing re-establishment of the periodontal space.28 Consistent with the present case, however, the resorption cavity may be filled with bone if a large area of the root is affected.1,3,4

In our case, the rationale for filling the entire root canal with MTA was based on a number of factors. First, an apical MTA plug at least 4 mm thick was required to provide an optimum apical seal.29 Second, a cervical barrier approximately 4 mm thick was necessary to prevent coronal leakage.30 Because the total length of these apical and coronal plugs corresponded roughly to that of the remaining root canal, filling the entire root canal with MTA instead of backfilling with gutta-percha was regarded as the most expedient and effective approach. Finally, in the absence of CBCT scans, the possibility that the resorption defect was more extensive and complex than noted radiographically could not be ignored, leading to tentative sealing of the root canal with a biocompatible material. It has been shown that intracanal application of MTA can also cause release of calcium ions through dentinal tubules into external resorption defects, which may favour the repair potential of the surrounding tissues.31

In addition to many laboratory studies, biocompatibility and the hard tissue inductive effect of MTA have been confirmed in humans, especially when MTA is used as a root-end barrier in teeth with immature apices15,16 and in root perforations.18 In the case described here, 6- and 12-month radiographic findings revealed that healing of the resorption site was not affected by the slight extrusion of the MTA beyond the root canal. This corroborates the findings of previous animal32 and human16 studies, demonstrating that contact between extruded MTA and periapical tissues does not elicit a host response and, thus, is not an obstacle to healing.

Although re-establishment of the entire periodontal space did not occur, treatment in the present case was considered successful both clinically and radiographically. There was complete healing of the radiolucency in the alveolar bone and continued regeneration of osseous tissue, while the resorption site remained stable throughout the 12-month follow-up period. Overall, both the patient and parents were satisfied with the treatment outcome as the permanent tooth remained functional.