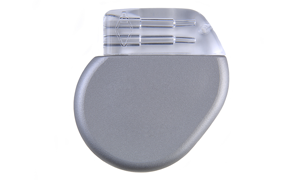 Ultrasonic dental devices have been in use since the 1950s and are important in the armamentarium of oral health care providers.1 Ultrasonic scaling is as effective as hand instrumentation for the removal of calculus and is widely used.1 Ultrasonic cleaning baths reduce cross-contamination of dental instruments and prostheses.2,3 Electronic apex locators and pulp testers have been important in the advancement of clinical endodontics.4,5 Other dental devices that emit electromagnetic energy include certain types of dental handpieces, amalgamators and electrosurgery units.6,7

The 2 methods of producing ultrasound are based on the magnetostriction and piezoelectric principles. Magnetostriction, a property of ferromagnetic materials, converts electromagnetic energy into mechanical energy; vibrations and heat are produced during this process.5 The piezoelectric principle is based on the deformation of crystals when an electrical charge is applied; this deformation is converted into mechanical oscillations without producing heat.5 Ultrasound energy has a frequency above the range of human hearing (i.e., above 20 kHz). Piezoelectric instruments operate at higher frequencies than those based on magnetostriction.5

Cardiovascular implantable electronic devices, chiefly implantable cardiac pacemakers and implantable cardioverter–defibrillators, are used to treat a variety of electrical cardiac defects, including bradyarrhythmia, ventricular tachycardia and fibrillation; they are also used in patients with complete heart block.7,8 It is estimated that 3 million people globally, including more than 500 000 individuals in North America, have implantable cardiac pacemakers.8 The use of such devices has significantly reduced mortality rates among patients with a history of life-threatening ventricular arrhythmia,7 and they are becoming more commonplace in the general population.

An implantable cardiac pacemaker is a small device sealed in a metal case. The unit consists primarily of a pulse generator, which produces an electrical impulse that is sent directly to the cardiac muscle via plastic-coated wires, and a long-lasting battery.6 Pacemakers are usually implanted under the skin in the chest wall (Fig. 1).6 In the most common type of device, the demand pacemaker, electrical impulses from the heart are transmitted to the pulse generator, which is programmed to monitor electrical activity and to provide additional electrical stimulation if necessary.6 Implantable cardioverter–defibrillators are similar to pacemakers, in that both devices are designed to monitor the heart rate continuously. When ventricular tachycardia or fibrillation is detected, the cardioverter–defibrillator delivers a precisely calibrated shock to stop the abnormal electrical activity and restore the normal heart rate (Fig. 2).7 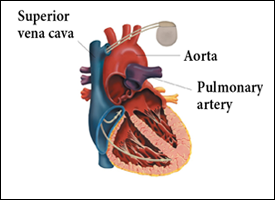 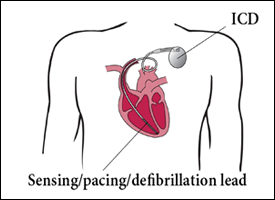 Ultrasonic dental equipment has been implicated in electrical interference with the normal functioning of implantable cardiac devices, and the use of this type of equipment for patients with these devices has been a source of controversy. Miller and colleagues9 used telemetry for in vitro evaluation of the Medtronics Thera 7942 dual-chamber bipolar pacemaker and the Minix 8340 single-chamber unipolar pacemaker. They found that both atrial and ventricular pacing, particularly in the unipolar pacemaker, was inhibited by electromagnetic interference produced by the magnetostrictive ultrasonic scaler, bath cleaner and electrosurgical unit that they tested.9 Trenter and Walmsley1 reported that magnetostrictive scalers may interfere with the operation of pacemakers, but that piezoelectric ultrasonic scalers did not affect pacemaker function. In 2000, the American Academy of Periodontology published a position paper with a recommendation that dentists avoid exposing patients with cardiac pacemakers to magnetostrictive ultrasonic scalers, because of the deleterious effects that ultrasonic instruments might produce in patients with these devices;10 however, this paper was rescinded in 2007.11 In a 2006 clinical study, Wilson and colleagues4 concluded that electronic apex locators and electrical pulp testers did not interfere with implantable cardiac pacemakers or cardioverter–defibrillators. In a 2007 in vitro study, Brand and colleagues7 demonstrated that the electromagnetic interference generated by most dental equipment, with the exception of one type of ultrasonic bath cleaner, did not interfere with the normal functioning of implantable cardioverter–defibrillators. In a recent in vitro study, Roedig and colleagues8 found that operation of one type of ultrasonic scaler, ultrasonic cleaning system and battery-operated composite curing light inhibited the pacing function of implantable cardiac pacemakers, but only the scaler and the curing light interfered with the pacing function of implantable cardioverter–defibrillators. In addition, they concluded that one type of amalgamator, electric toothbrush, electric pulp tester, electrosurgical unit, and high-speed and low-speed dental handpieces tested produced no electromagnetic interference.8 However, in subsequent correspondence, various authors have questioned the validity of these results.12,13

Management of the Clinical Issue

The inconsistency of the supporting evidence makes it difficult to offer authoritative guidelines on the use of ultrasonic dental devices for patients with cardiovascular implantable electronic devices. We suggest a practical, conservative approach to using such equipment in this patient population. All patients who have an implantable cardiac pacemaker or cardioverter–defibrillator should be encouraged to carry the manufacturer's identification card with them at all times. Oral health care providers should document the following in the patient's record: manufacturer of the device, model number, serial number, date of implantation and mode of operation.14 Caution should be exercised when operating ultrasonic equipment and battery-operated curing lights near dental patients or health care workers who have cardiovascular implantable electronic devices.8 Based on the current evidence, it is recommended that use of magnetostrictive ultrasonic equipment be avoided on or near individuals with implantable cardiac pacemakers or cardioverter–defibrillators.6 At this time, piezoelectric equipment appears to have no substantial effects on these devices.1,6 Further in vivo clinical trials are warranted to determine the precise effect of ultrasonic dental equipment on cardiovascular implantable electronic devices.