Hypodontia and Microdontia: Clinical Features of a Rare Syndrome 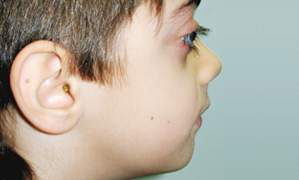 A 9-year-old boy was referred by his dentist to the dentistry department of Riuniti di Bergamo Hospital for evaluation and possible orthodontic treatment. His syndrome had been diagnosed during an ophthalmic examination when he was 3 years old. Clinically, the patient presented with exophthalmos (Fig. 1) and mild hypertelorism.

Intraoral examination revealed severe hypodontia and microdontic teeth, which are typical of this syndrome. A mix of permanent and deciduous teeth was present (Figs. 2 and 3, Table 1).

Radiographic examination showed that 10 permanent teeth were missing, 6 in the maxilla and 4 in the mandible (Fig. 4).

Cephalometric tracing and analysis indicated a skeletal deep bite and a normodivergent pattern with biretrusion. The patient also had central diastema and dental asymmetry. 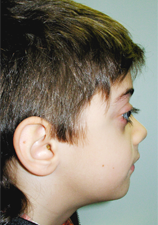 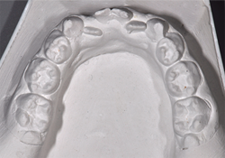 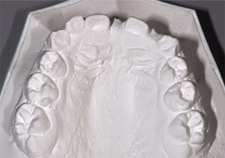 What is this condition?

Rieger anomaly is a rare autosomal dominant condition that encompasses a spectrum of developmental anomalies of the anterior chamber of the eye. These defects confer a 50% risk of glaucoma, a condition that is usually resistant to medical therapy and can lead to blindness. If the ocular anomaly is combined with other abnormalities, such as craniofacial, dental and developmental somatic defects, it is termed Axenfeld–Rieger syndrome (ARS). Two genes, both transcription factors — PITX2 at 4q25 and FOXC1 at 6p25 — have been shown to cause the phenotype of this syndrome.1,2 The prevalence of ARS has been estimated as 1 in 200 000 population.

Early diagnosis of the syndrome based on dentofacial and systemic features is important as subsequent ocular complications may thus be prevented.

This is an inheritable developmental disorder with variable expression and complete penetrance. In 30% of cases, the condition is a result of de novo mutation; in 70%, inheritance is autosomal dominant.5

Patients with ARS often have craniofacial anomalies and involuted peri-umbilical skin. These signs can be associated with a wide diversity of other traits, such as short stature, limb anomalies, empty sella syndrome, pituitary anomalies and a variety of neurologic and dermatologic disorders. The differential diagnosis should include dwarfism, hypopituitarism and defects in growth hormone.

According to Childers and Wright,7 ARS is the result of damaged or abnormally migrated neural crest cells, the ectodermal mesostroma, late in gestation. These cells normally give rise to connective tissue, bones and cartilage and are necessary for craniofacial, ocular and dental development. Aberrations in neural crest development may explain the morphologic abnormalities of the maxillary and mandibular hypoplasia, hypertelorism, tooth abnormalities and empty sella syndrome.

Ozeki and colleagues8 conducted a study that elucidated the association between eye disorders and other clinical features. They evaluated 21 patients, aged 1 month to 41 years, affected by ARS. All patients had glaucoma, which was bilateral in 17 cases and unilateral in 4 cases; the glaucoma was associated with dental anomalies in 9 cases, facial anomalies in 5 cases, and Alagille syndrome in 3 cases.

Patients with ARS require regular ophthalmic appointments throughout their lives to monitor changes in the optic nerve head and intraocular pressure. As the syndrome is frequently familial, blood relatives should also be investigated. Over 50% of patients with ARS develop secondary glaucoma, which raises the threat of vision loss and blindness. Initially, therapy for glaucoma is medical and involves topical application of beta-blockers, carbonic anhydrase inhibitors or alpha-agonists to decrease intraocular pressure. Surgical intervention is required for most patients, and this includes goniotomy, trabeculectomy and trabeculotomy. Trabeculectomy with antimetabolite therapy is the treatment of choice for patients suffering from ARS.9,10

It is important that dentists know about ARS, as dental and facial features may be the first recognizable symptoms of this condition. Early diagnosis is necessary to prevent ocular complications with precocious interventions.

Our patient remains under review for orthodontic treatment. The aim of such treatment is to preserve the deciduous teeth and solve crowding issues to maintain both function and esthetic appearance. In the long term, dental implants are the most likely treatment option for these patients.

Patients with ARS have multiple problems and require an interdisciplinary approach, which is fundamental in terms of providing the best treatment and follow-up.