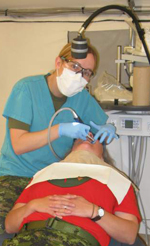 Resolute Bay is located on Cornwallis Island in the territory of Nunavut. It is the second most northerly community in Canada, with a population of approximately 250 people; about half of them are children and 80% are Inuit. The terrain is mainly gravel and the average yearly temperature is –16.4 Celsius. A dentist travels to Resolute Bay 3 to 4 times per year, spending about a week in the community each time. In the event of an emergency during the dentist's absence, patients are flown out for treatment.

Operation NANOOK 2011 was a Department of National Defence military operation that took place in the Canadian Arctic in the summer of 2011. Operation NANOOK was a joint Navy, Army, Air Force and Special Forces two-part operation involving the United States and Denmark. The first part of the operation was a sovereignty and presence patrolling operation employing the Canadian Forces in the air, on land and at sea. This part of the operation was conducted on Cornwallis Island and at sea in the Davis Strait, Baffin Bay and Lancaster Sound.  The second part of Operation NANOOK was to prepare for a simulated major air disaster to test the Canadian Forces ability to respond to a downed aircraft in the Arctic.

A dental team taken from 2 different Canadian Forces Health Services units was also deployed as part of Operation NANOOK 2011 and marked the first time that a CF dental team was part of a military operation in the High Arctic. Major Rachel Jetté from 1 Field Ambulance, Edmonton and Corporal Kelly Zseder from 1 Dental Unit Detachment Edmonton were tasked with a dual mandate to provide dental support to the 500 plus military personnel on exercise as well as to conduct outreach to the community by providing dental treatment to the residents of Resolute Bay as arranged through a partnership with the Government of Nunavut and Health Canada.

As the results of Health Canada's Inuit Oral Health Survey (2008-2009) indicated that 70% of Inuit are in need of immediate dental care, and given the willingness of the CF to provide some dental outreach to the community during Op NANOOK, it made sense for Health Canada, the Government of Nunavut and the Department of National Defence to collaborate on this initiative. 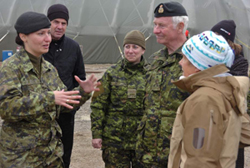 Bringing dental care to a military mission in the High Arctic is a unique challenge. A deployable field dental clinic with dental equipment, materials and enough supplies to be self-sufficient are required. This was part of the challenge that Major Jetté and Corporal Zseder faced before arriving in Resolute Bay. When they did arrive, the first order of business was setting up a 16'× 20' prospector tent and getting their dental equipment ready to go, as treatment of Operation NANOOK's personnel began immediately. In addition to taking care of dental emergencies on the Regular and Reserve Forces and Canadian Rangers, the CF dental team also provided general dental hygiene services.

The dental services that the CF dental team provided to the community during the operation proved to be a success. To treat the residents of Resolute Bay, the team travelled from their camp to a dental clinic located at the community health centre. Their patients appeared very appreciative of the opportunity to have some of their dental work completed.

Unfortunately, the activities related to the dental outreach initiative to the community were suspended on August 20, 2011, due to the tragic crash of the First Air flight 6560 that occurred just 2 kilometres outside the town. The flight, which was bound for Resolute Bay, was carrying 15 passengers of which only 3 survived. As a result of this tragedy, Op NANOOK personnel, including the dental team, immediately sprang into action deploying to the crash site to assist with its aftermath, providing emergent care, stabilization and evacuation of the survivors and assistance to the Government of Nunavut coroner in the forensic identification of those that perished.

Despite the unfortunate circumstances which ceased the operation prematurely, the initiative did highlight the strong relationship that exists between Health Canada, the Department of National Defence and the Government of Nunavut. It was because of the strength of this partnership that the initiative was realized. The hope is that the success of this venture will help pave the way for other dental outreach initiatives to become integrated with future military operations.