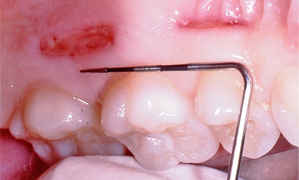 Our research group is comparing clinical, histological and molecular healing profiles of oral and skin wounds using human and pig models. The goal is to determine the molecular cues that lead to scarless healing in the oral mucosa and use that information to develop scar prevention therapies for skin and prevent aberrant wound healing in the oral cavity. Wound healing in human and pig palatal mucosa is almost identical, and scar formation is reduced in oral wounds compared with skin. The striking difference between these tissues is transient and rapidly resolving inflammation in oral wounds compared with long-lasting inflammation in the skin wounds. Currently, we are looking at wound transcriptomes (genes differentially regulated) and proteomes (a set of proteins) to investigate how these wound healing responses in skin and oral mucosa are regulated at the molecular level.

Scar formation in skin is a common result of the wound healing process. Clinically, scars vary greatly and typically range from fine lines to expansive, disfiguring hypertrophic or keloid tissue. They also differ depending on such factors as the extent of the trauma, their location in the body, genetic factors, sex and age of the patient.1-3

At the molecular level, the hallmark of scar formation is accumulation of collagen and fibronectin-rich extracellular matrix (ECM) in response to increased activity of transforming growth factor-β1 (TGF-β1) and reduced ECM turnover by fibroblasts.4-6 In scars, collagen fibre bundles are densely packed, abnormally thin and oriented parallel to each other rather than arranged in the basket weave pattern seen in normal tissue. Elastic fibres are fragmented and abnormally organized, and dermal appendages are often missing. Because of these characteristics, scars are less elastic and have only about 70% of the tensile strength of intact skin even after an extended period.7-9 Regardless of their type, scars lead to considerable morbidity. Even small scars in a visible area can have a psychosocial impact on individuals. More excessive scarring may affect mobility (e.g., joint contractures) and cause pain and problems with growth in children.

In the developed world, millions of surgical procedures are performed each year and, as a result, 100 million patients acquire scars.10-12 It has been estimated that, in the United States alone, at least 45 million patients could benefit from therapies that reduce scar formation; however, the current standard of care cannot consistently prevent scar formation.10-12 Effective anti-scarring therapy would be especially important for burn patients, the majority of whom (67%) develop disfiguring hypertrophic scars.13 Many of these patients are children.13 In addition to reducing suffering and improving quality of life, an effective anti-scarring therapy would create an estimated US $4 billion market annually.12

In mammals, the scarring of skin is developmentally regulated. Fetal skin heals without scars until the late third trimester of gestation.14 This type of healing response is programmed into the tissue itself, as evidence shows that the embryonic environment is not responsible for scarless healing.15 One of the most striking differences between fetal and adult healing is the lack of inflammation in embryonic wounds that heal without scars.16-17 Further evidence of the importance of the inflammatory reaction in scarring comes from studies showing that, if embryonic skin is more severely injured, inflammation occurs followed by scar formation. In addition to reduced inflammation, healing in embryonic skin promotes the expression of molecules that are associated with scarless healing, such as hyaluronan, tenascin-C and a large variety of collagens, as well as high proteolytic activity and low levels of scar-promoting TGF-β1.18

A better understanding of adult skin wound healing is needed to prevent scarring, but information from widely used animal models cannot always be applied to humans. For example, the skin wound healing process in loose-skinned animals, including mice, is fundamentally different and does not result in scar formation similar to that found in tight-skinned animals and humans.19

Ideally, comparing scar-free and scar-prone wound healing in the same people would help us to identify factors that promote scar-free wound healing and inhibit scar formation. However, prospective skin wound healing studies in humans are ethically problematic for several reasons, not the least because wound healing results in untreatable scars. In addition, finding a tissue that shows scar-free healing in adult humans is difficult, as most tissues, with the exception of liver and skeletal muscles, have a limited ability to regenerate or heal by repair.20,21

A common impression exists among clinicians that human oral mucosal wounds heal with minimal scar formation compared with skin wounds. There is likely an evolutionary reason for this. Our teeth have developed for grinding food of varying consistencies rather than just swallowing large pieces of prey. Scarring in the oral cavity would have been detrimental to food intake by ancient humans. Scarring of the skin, on the other hand, may be the price we pay for powerful inflammatory reactions against bacterial insults.

The oral cavity has many structurally different tissues that likely heal in different ways. Periodontists and oral surgeons are well aware that incisions in the buccal mucosa result in scars, whereas harvesting gingival grafts from the palate produces no visible sign of scarring (Fig. 1). In addition, incisions in the gingiva itself heal without scars. Studies using the murine model have indicated that wounds in the tongue heal quickly with little inflammation and altered TGF-β response compared with skin.22-24

Various reasons have been suggested for minimal scarring in the oral cavity, including distinct fibroblast phenotype, the presence of bacteria that stimulate wound healing and the moist environment and growth factors present in saliva.25 Animal lovers know that their pets like to lick their wounds, and animal studies have shown that licking and saliva application enhance skin wound healing and reduce inflammation.26-29 This effect of saliva is attributed mainly to its relatively high concentration of epidermal growth factor (EGF), and topical use of artificial saliva has been suggested as a treatment for skin burn wounds.29 Although a number of studies have shown enhanced wound healing when EGF is applied to acute and chronic wounds, the efficacy has been marginal and may require better carriers and sustained-release therapeutics.30 At present, there is very little information regarding the quality of healing (i.e., scar formation) after EGF application, and it is very likely that EGF is not the only factor that promotes wound healing in the oral cavity. In fact, rigorous experimental evidence that demonstrates convincingly and systematically that oral wounds truly heal without scars and with regeneration is still missing. In addition, the influence of tissue site, patient age and other patient-related factors on oral wound healing is largely unknown.

Our research team is investigating oral wound healing and comparing it with scar-forming skin wound healing. Our first aim is to provide experimental evidence that oral wound healing results in less scar formation than skin healing. Second, we want to gain a better understanding of the molecular and cellular processes involved in scarless vs. scar-forming wound healing in oral mucosa and skin, respectively. Our ultimate goal is to apply this knowledge to find new ways to promote healing of skin wounds with reduced scar formation. We may then be able to use this information to improve compromised wound healing in the oral cavity, such as soft tissue healing around implants, treatment of peri-implantitis and osteonecrosis of the jaw.

We have already analyzed transcriptomes (gene expression profiles) of experimental human palatal wounds. The expression of about 1000 genes is either up-regulated (≥ 2-fold change) or down-regulated (≥ 50% change) 1 day after wounding and about half of that number in 3- and 7-day-old wounds (Table 1). Details will be published elsewhere.

To validate the pig model, we recently systematically compared the healing of similar experimental wounds in the oral palatal mucosa in these pigs and in humans. Wounds in both pigs and humans showed similar healing responses and molecular composition over time.

Using this model, we showed for the first time that scar formation in oral mucosal wounds is significantly reduced, clinically and histologically, compared with similar skin wounds (Fig. 2).31,32 One of the most striking differences was a rapid but transient inflammatory response in oral wounds compared with a longer-lasting inflammatory reaction in skin wounds. In addition, TGF-β1 signaling was more transient in oral mucosa than in skin. Both these observations suggest that oral wound healing mimics that of fetal skin with reduced scar formation due to the rapidly resolving inflammatory reaction.

Furthermore, remodeling of the wound matrix seems to be more rapid in oral wounds, resulting in almost normal tissue architecture by 60 days (the initial size of the wounds was 15 × 27 mm). Although these wounds do not show signs of clinical scar formation at this stage, molecular remodeling is still underway and it remains to be shown when, if ever, the molecular composition is completely normalized. It is also not known whether palatal wounds fully regenerate. In pigs, such regeneration is not evident at 60 days as judged by the lack of reformation of rugae, special developmental structures of the hard palate (Fig. 2). In fact, preliminary clinical evidence from humans suggests that rugae “reroute” rather than “regenerate” (i.e., old rugae will shift position during healing), but long-term results are still missing. 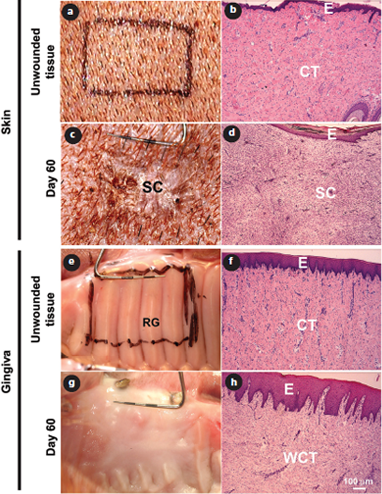 Figure 2: Representative clinical (a, c, e, g) and histologic (b, d, f, h) images of red Duroc pig skin (a–d) and oral mucosa (gingiva; e–h) before (a, b, e, f) and 60 days after (c, d, g, h) wounding. In gingiva, wound healing is scarless both clinically (g) and histologically (h) 60 days after wounding, but the rugae have not regenerated (g). At this point, scar formation is evident both clinically (c) and histologically (d) in skin. E = epithelium; CT = connective tissue; SC = scar; WCT = connective tissue that has regenerated in the wound area; RG = rugae. Hematoxylin and eosin staining (b, d, f, h).

In summary, we have shown that full-thickness palatal wounds heal with minimal scars in humans and pigs. We have started to analyze and compare molecular aspects of wound healing in oral mucosa and skin to determine the pathways important for scarless healing. In future, this information will be used to develop therapies for the prevention of scar formation in skin after burns, surgical interventions and accidental trauma.

Acknowledgements: Studies were supported by grants from the Canadian Institutes of Health Research and the Sigrid Juselius Foundation. We thank Mrs. Ingrid Ellis for her help in preparing the manuscript and Dr. Tara Habijanic for performing the human wound healing study.