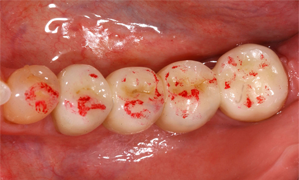 Aim: The aim of this prospective clinical trial was to evaluate the performance of zirconia-based all-ceramic posterior fixed partial dentures (FPDs) after 4 years of clinical use.

Materials and Methods: Fifteen patients who needed 3- or 4-unit posterior FPDs were enrolled in the study. One manufacturer fabricated all restorations, following established clinical protocols and using computer-aided design/computer-aided manufacturing technology and one veneering material. Survival and success were evaluated clinically. Impressions were taken immediately after definitive cementation and after 48 months. Gold-coated epoxy replicas of the restorations were analyzed with scanning electron microscopy (SEM). Surface alterations were also evaluated clinically.

Results: After 48 months, the survival rate for the FPDs was 100%. Three restorations exhibited minor chipping, for a fracture rate of 20% after 4 years. Thirty (59%) of the 51 individual restoration units revealed clinically rough occlusal surfaces, a finding that was confirmed by SEM.

Conclusion: The placement of 3- and 4-unit zirconia-based posterior FPDs can be considered a reliable treatment modality for medium-term clinical use. However, surface alterations of the veneering ceramics were observed after 4 years and are of notable clinical concern.

Conventional metal frameworks veneered with silica-based ceramics are regarded as the gold standard for posterior fixed partial dentures (FPDs) because of their low failure rate (8%–10% after 10 years).1,2 Nevertheless, in recent years, dentists and patients have expressed growing interest in tooth-coloured metal-free FPDs for conventional restoration and replacement of decayed or missing teeth. Increasing demand for all-ceramic solutions may be attributed to excellent biocompatibility and enhanced esthetic outcomes.3 Frameworks fabricated from oxide ceramic materials, such as aluminum oxide (Al2O3) and yttria-stabilized zirconium dioxide (ZrO2), were introduced to dentistry in conjunction with the advancement of computer-aided design/computer-aided manufacturing (CAD/CAM) technology. These materials can withstand functional and occlusal loads, are structurally reliable and achieve an acceptable clinical fit.4-7 Nevertheless, the functional stability of the framework and veneering is key for longevity and clinical success of the restoration. In recent years, chipping of the porcelain veneer has been reported as the major drawback of zirconia frameworks,8-11 whereas fracture of oxide ceramic frameworks is rare.11 Vult von Steyern9 reported a fracture rate for minor chipping of 15% after 2 years of clinical use, but the fractures went unnoticed by patients. Raigrodski and colleagues10 reported chipping of veneer material after 3 years, primarily on the second molar, in 25% of 3-unit posterior FPDs. No delamination of the porcelain veneer and no framework fractures were noted.10 Molin and Karlsson12 observed no chipping of the veneer ceramics in zirconia FPDs with anatomically designed frameworks; however, the proportion of slightly rough or pitted occlusal surfaces increased to 30% in the study cohort after 5 years. In a meta-analysis comparing all-ceramic FPDs with metal–ceramic FPDs after 5 years, Sailer and colleagues13 calculated a fracture rate of 6.5% for the all-ceramic frameworks, 13.6% for all-ceramic veneer material, 1.6% for metal–ceramic frameworks and 2.9% for metal–ceramic veneering material.

The aim of this prospective clinical trial was to assess the long-term clinical performance of FPDs consisting of posterior zirconia frameworks with a corresponding ceramic veneer. On the basis of previous findings for zirconia restorations, the working hypothesis was that no framework fractures would be observed after medium-term use, but there would be some fracturing of the ceramic veneer and increasing surface roughness. Also, a replica technique for microscopic evaluation of the clinical wear of the veneer surface was tested.

This prospective study was conducted at Dental Clinic 2–Prosthodontics, Friedrich-Alexander University, Erlangen-Nuremberg, Germany, and was approved by the local Institutional Review Board. After clinical and radiographic examination, 15 patients (5 women and 10 men) between the ages of 29 and 73 years (mean 50.1 years) who needed a 3- or 4-unit posterior FPD (distal to the first premolar) were randomly selected from the clientele of Dental Clinic 2 who were seen over the period March 2003 to July 2005. Only patients with distal end abutments were included. The abutment teeth had to be vital or had to have been endodontically treated and without apical periodontitis for the previous 6 months. Adequate occlusogingival height for an appropriate connector area of at least 9 mm2 was another precondition. These patients were part of a larger group of 30 patients for whom outcomes after 3 years were described in a previous report.17

Each treatment was performed by 1 of 2 experienced clinicians according to established protocols for FPD restorations. Core build-ups (Clearfil Core, Kuraray Europe, Frankfurt/Main, Germany) or post-and-core restorations (Cerapost, Brasseler, Lemgo, Germany) were placed when clinically indicated, by means of an adhesive technique (Panavia 21 and ED Primer, Kuraray Europe). The preparation guidelines specified a 1.0-mm light chamfer preparation, a preparation line following the scalloped free gingival margin on sound tooth structure, an axial reduction of 1.5 mm with tapering of at least 4° and occlusal reduction of 1.5 to 2.0 mm.

After fabrication of a master cast and surface digitization, a custom anatomic framework was designed and manufactured by means of virtual technology, to ensure uniform thickness of the veneer material (Lava Frame Zirconia, 3M ESPE, Seefeld, Germany). All veneering was performed by a single dental technician according to established protocols and the manufacturer's recommendations, with the corresponding feldspathic ceramic (Lava Ceram, 3M ESPE). All restorations were cemented with glass ionomer cement (Ketac-Cem, 3M ESPE).

Two dentists not involved in the restorative treatment independently examined the patients for material failures and biological complications at baseline and annually up to the 48-month follow-up appointment. Using a standard probe, they assigned a clinical rating to the surface: either smooth or slightly rough and pitted. In cases of disagreement, the lower rating was used. 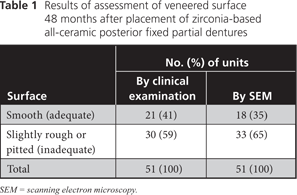 Each restorative unit of each FPD was examined and rated individually for surface wear. Upon clinical examination, 30 (59%) of the 51 surfaces showed a visibly rough contour that was also detectable with a dental probe. By SEM analysis, 33 (65%) of the replicas revealed a rough-textured surface (Table 1). SEM showed a wear pattern with crystalline structure (Figs. 1 and 2). The surface of the teeth opposite each restoration was metal (19 [37%]), enamel (17 [33%]), amalgam (12 [24%]) or ceramic (3 [6%]). Relative to the baseline examination, occlusal contact points were altered, with respect to either site or surface area, for 28 (55%) of the 51 restoration units (Figs. 3 and 4). 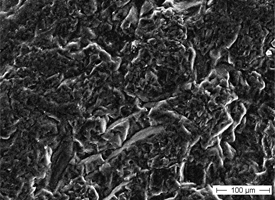 Figure 1: Crystalline structure of a roughened veneering ceramic surface after 48 months of clinical use. 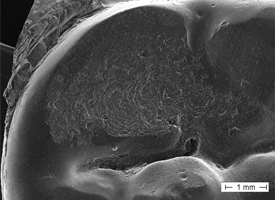 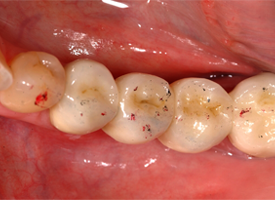 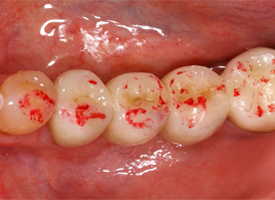 Figure 4: Occlusal contacts for the same restoration as shown in Fig. 3, 48 months after placement.

The overall survival rate of the short-span oxide ceramic FPDs in this study (100%) indicates that this material is suitable as an alternative to conventional porcelain-fused-to-metal (PFM) restorations. These results agree with the findings of previous research.9-12,19 Minor cohesive fractures occurred in 3 restorations, but delamination of the veneer porcelain, with exposure of the framework material, was not detected. The overall chipping rate of 20% is far greater than the reported veneer fracture rate of 2.9% after 5 years for metal–ceramic restorations13 and is comparable to that reported by Raigrodski and colleagues (25% for minor chip-off fractures after 3 years of use for identical core and ceramic veneer materials).10

One clinically significant finding was the rough and pitted surface that was detected in more than half of the 51 ceramic units after 48 months (59% by clinical examination, 65% by SEM examination). Molin and Karlsson12 reported similar clinical observations, noting slightly rough or pitted surfaces in 30% of zirconia-based restoration units of FPDs after 5 years. Maintenance of a smooth ceramic surface during clinical use is key to avoiding initiation or progression of microcracks and to limiting abrasion of the opposing teeth.20,21 In previously reported in vitro findings, increased roughness of the ceramic surface significantly enhanced wear of composite resin and enamel on antagonistic teeth.20

The pitting observed in SEM images (Figs. 1 and 2) could lead to the initiation of microcracks and, under further wear and in the presence of moisture, to subsequent, more pronounced destruction of the ceramic veneer (Figs. 5 and 6). Fischer and colleagues22 observed a continuous decrease in the strength of ceramic veneer with increasing surface roughness. The veneering ceramic used for metal-based restorations and zirconia frameworks is mainly feldspathic porcelain.23,24 SEM analysis in the current study revealed considerable alteration of the feldspathic porcelain, with resultant exposure of the crystalline structure. The composition and microstructure of the zirconia veneering ceramic applied in this study may differ from those of conventional dental veneering materials used for PFM restorations. Also, the recommended firing temperature for Lava Ceram core material (3M ESPE) (i.e., 820°C) is far below the firing temperatures for conventional veneering ceramic.25 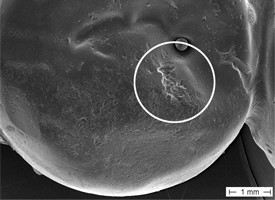 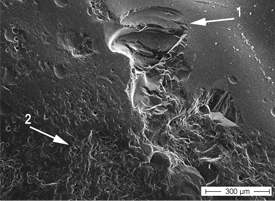 Figure 6: Further magnification of the circled area in Fig. 5 shows chipping of the ceramic veneer (1) next to a rough, pitted area (2).

Notably, the findings of roughness and pitting cannot be attributed solely to occlusal adjustment, as the rough areas were spread across the entire occlusal surface (Fig. 2). Clinical recommendations demand a perfectly polished surface after occlusal adjustments.26,27 Therefore, the increase in the size of occlusal contact points can be attributed to pronounced surface wear. Future alteration of the static and dynamic occlusion patterns might be an undesirable adverse effect in such cases.

According to Yip and colleagues,28 the lowest wear rates, comparable to those obtained for enamel, occur with restorations made from gold alloy (or other alloys with high content of noble metal), with the exact rates of wear depending on the specific type of alloy. In that study, the observed attrition of veneer resulted from contact between the occluding surfaces and was independent of the opposing dentition, whether enamel or gold alloy restoration. In an in vitro study, Jung and colleagues29 found that the degradation in strength of veneering ceramics resulted from multicycle loading. Large numbers of contact cycles lead to radial and subsurface cracks, which limits the lifetime of the material. Conversely, cyclic fatigue testing has affirmed that the lifetime of veneer-framework systems consisting of feldspathic glass veneers and tough zirconia-based frameworks is more than 20 years, provided the bridge connector is properly designed.30

Despite the lack of quantitative measurements of clinical surface wear in the investigation reported here, SEM assessment of consistently prepared replicas of the restorations confirmed the clinical observations and demonstrated significant wear of occlusal surfaces with clinical use. Additional long-term clinical studies are needed to determine the durability of currently available ceramic veneers for zirconia frameworks and to obtain data on the most frequent clinical complications.

Within the limitations of this in vivo study, 2 main conclusions can be drawn. First, use of a zirconia framework for 3- or 4-unit posterior FPDs seems appropriate for a stress-bearing posterior location. Second, wear of the veneering ceramic, which became evident after medium-term clinical use, resulted in roughened occlusal surfaces and is of notable clinical concern.