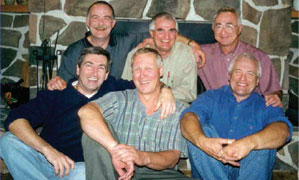 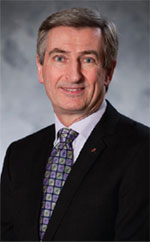 Trips to visit relatives can often be memorable and revealing experiences for a young child. These family excursions can offer a glimpse into new worlds and how others live. For CDA's new president Dr. Robert MacGregor, such childhood visits to a close relative sparked his interest in pursuing a career in dentistry.

Dr. Len Israel, the brother of Dr. MacGregor's grandmother, was a dental graduate of Dalhousie University in the late 1920s. He practised out of a single operatory attached to his house in Sydney, Nova Scotia. Being summoned to the operatory by his great-uncle opened up a whole new world to the young Robert. "When I went to visit he would always take me into his office to show me some prosthetic cases in progress, or radiographs of something he had done," recalls Dr. MacGregor. "He was especially excited about endodontics, as this was a new treatment for him at the time," he continues. "He took great pride in the teeth that he could save by performing root canal therapy."

The excitement and enthusiasm displayed by his elder relative, along with his constant words of encouragement over the years, made Robert realize that dentistry might be a good fit. "I have always enjoyed working with my hands, problem-solving and especially working with people," he says.

After completing his undergraduate studies at Acadia University, Dr. MacGregor would earn his dental degree from Dalhousie in 1983. Shortly after graduation—where Dr. Israel was the proudest one in attendance at the convocation ceremony— Dr. MacGregor began practising in Kentville, Nova Scotia, a community nestled in the Annapolis Valley. For almost 30 years now Dr. MacGregor and his wife Noreen have thoroughly enjoyed living and raising a family in this part of the province, an area primarily made up of small agricultural communities up and down the Route 1 highway.

Dr. MacGregor became an active member of the Annapolis Valley Dental Society not long after he entered practice, and he served as its president in 1985. "Organized dentistry has always had a natural importance to me and I was lucky enough to practise in an area that had a very active local society," notes Dr. MacGregor. "I enjoy giving back to the profession, largely due to the quality of the colleagues around me."

The true quality of Dr. MacGregor's colleagues became immediately apparent when he began attending meetings of his local dental society. He remembers fondly how six like-minded dentists from the Annapolis Valley were first drawn to each other. "We used to go to dental society meetings and the six of us would often stay late talking about particular cases," he says. The sextet discovered that they all had a passion for high-quality dentistry and for doing the right thing for their patients.

The strong bond between the dentists would be put to the test when a close friend and colleague was diagnosed with cancer. The group knew they had to rally around their ailing colleague and try to take care of both his family and his practice. "We all got together and took turns volunteering our services once a week to work in his practice and provide care for his patients," he recounts.

Their friend would ultimately lose his battle with cancer and Dr. MacGregor and his fellow dentists were asked by the family to serve as pallbearers at the funeral. While at a cottage retreat to memorialize their fallen comrade, Dr. MacGregor and his fellow dentists wanted to find a special way to honour their friend. The idea for the "Pallbearers Study Club" was born, and this uniquely named group was soon formalized and officially registered. The study club is still in existence and the members continue to meet five or six times each year for CE, fellowship, to discuss cases and for social gatherings. 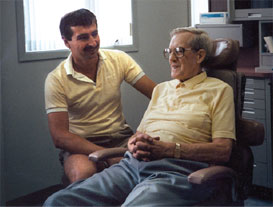 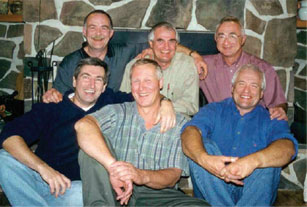 Advocating on Behalf of Those in Need

The camaraderie and generosity displayed by these dentists—looking out for those in need—exemplify the caring qualities of many members of the dental profession. By having such positive role models, like his great-uncle and other leaders at the Nova Scotia Dental Association (NSDA), Dr. MacGregor was determined to continue giving back to the profession. He can remember hearing dentists such as Carl and Earl Dexter, John Christie and Roger Porter speak at his early NSDA meetings. "These people truly cared about the profession and spoke from the heart, and that really impressed me," he says.

These experiences encouraged Dr. MacGregor to become more involved with his provincial association and then on to CDA. He served as NSDA president in 1994–95 and sat as a member of the Nova Scotia Children's Oral Health Program Advisory Committee from 1996 to 2004. His initial involvement at CDA included working with CDA's Government Relations Steering Committee. "I really enjoyed my time on this committee and taking part in the annual Days on the Hill meetings with MPs," notes Dr. MacGregor. "The parliamentarians are always very engaged and receptive to the issues we present to them, whether it's tobacco cessation, tuition levels for dental students or access to care for children and seniors."

CDA continues to advocate on a variety of issues at the federal government, with a particular focus on the oral health of children and seniors. "The Canadian Health Measures Survey showed that dental care in Canada is as good as or better than anywhere in the world," says Dr. MacGregor. "However, some deficiencies and frustrations remain that hinder what we are trying to accomplish, such as wait times for children who require dental treatment in hospitals."

A Renewed Sense of Optimism

Continuing to improve relationships with all members of the dental community will be a priority during Dr. MacGregor's tenure as CDA president. "We need to reach out to other stakeholders, such as specialists, the academic community and dental students, to bring them all into the collective tent," he says. "I believe CDA can continue to play a useful role by convening national meetings and forums and reinforcing collaborative relationships with members of the dental family."

During Dr. MacGregor's time on the CDA Board since 2003, he has witnessed CDA make a successful transition to a new membership and governance model for the national organization. According to Dr. MacGregor, the initial feedback on the new model has been positive. "The objectives and expectations seem to have been met or exceeded with minimal growing pains," he says. "The provincial associations have shown a willingness to share or provide services in-kind and to co-brand with CDA whenever possible. Decision-making will become even more streamlined and efficient as everyone becomes more comfortable with their roles and responsibilities."

A recent example of the new model working efficiently is the national awareness campaign, comprised of print, radio and TV advertisements, launched this spring. "The idea for this program blossomed from an initial concept around the CDA Board table to a full-fledged national program," he recalls. "It shows that the new model can function effectively and it bodes well for the future."

Dr. MacGregor has good reason to remain optimistic about the future of dentistry in Canada. The family legacy forged by his great-uncle is set to continue as one of Dr. MacGregor's two sons is currently a first-year dental student at Dalhousie. "He was taking courses toward a teaching degree when he decided to write the DAT and pursue dentistry," says Dr. MacGregor. The senior MacGregor is also thrilled that his son has expressed his intentions to practise dentistry in Kentville upon graduation.

Giving back to the profession and learning from those who have come before us are lessons that Dr. MacGregor has applied to his own time in dentistry. Along with his fellow pallbearers, he will be passing an exceptional legacy of caring along to the next generation of Canadian dentists.

Sean McNamara is writer/editor at the Canadian Dental Association.