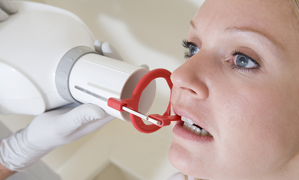 Background and Objective: The detectors (both solid-state sensors and photostimulable phosphor [PSP] plates) used for digital intraoral radiography cannot be autoclaved, and barriers are typically used to prevent the spread of infection. The aim of this study was to determine the effectiveness of a barrier envelope system for PSP plates.

Methods: Disinfected PSP plates were aseptically inserted into barrier envelopes and placed in a periapical location. One PSP plate was placed in each of 28 patients, and 12 plates in each of 2 volunteers (D.S.M., J.D.W.). After retrieval, each PSP plate was removed from its barrier envelope, immersed in trypticase soy broth and aliquots were plated on trypticase soy agar. Bacterial colonies were counted 2 days later.

Infection control in health care settings involves compliance with a set of principles that are based on the concept that all patients are potentially infectious. These internationally accepted principles, which are termed “standard precautions,” are regarded as fundamental to the prevention and control of infection in dental clinics. Their intent is to isolate various body substances through the use of protective barriers, such as gloves, masks and goggles, and through aseptic handling and disposal of contaminated sharps or waste, any of which may be a source of cross-contamination in a dental operatory.

The advent of digital intraoral radiography has created new infection control challenges not seen with film-based imaging. With the latter mode of imaging, contamination of the film is prevented by complete disposal of the packaging. In contrast, digital detectors (both solid-state sensors and photostimulable phosphor [PSP] plates) are reused many times (in a variety of intraoral placements), but they are not suitable for autoclave sterilization; therefore, cross-contamination is possible. Prevention of the transfer of intraoral organisms has been attempted through the use of plastic barriers. However, 2 studies of PSP plates have indicated that cross-contamination is a substantial problem in digital radiography.1,2 Bacterial contamination of the PSP plates can occur at a number of points in daily usage. For example, bacteria from sources outside the patient’s oral cavity may contaminate both the PSP plates and the barriers. Contamination may originate during the manufacturing process, from ambient air and/or through the use of latex gloves by dispensary staff during cleaning, disinfecting and packaging.1 However, the most likely source of contamination is contact between the PSP plate and the patient’s oral environment. In this situation, contamination of the PSP plate could result if there are perforations of the plastic barrier, if there is contact between the barrier and the oral fluids during removal for processing and/or if there is contact with contaminated gloves.

Kalathingal and colleagues1 and Negron and colleagues2 assessed possible routes of cross-contamination during use, processing and disinfection of PSP plates. Kalathingal and colleagues1 studied barrier integrity, one of the parameters associated with possible cross-contamination. The barrier used to hold an individual PSP plate usually consists of a plastic sealable envelope (here called a “barrier envelope”). These authors evaluated the rate and source of contamination with use of gas sterilization in conjunction with this type of barrier. They found bacterial growth on 56% of the PSP plates (and 76% of the colonies selected from these plates grew on Mitis Salivarius agar), in spite of weekly gas sterilization and application of a 70% alcohol wipe between patients.1 In a similar study investigating infection control for PSP plates in multiple-use tests, Negron and colleagues2 reported that 61% of the PSP plates were contaminated with oral streptococci after being cultured for 24 hours. In neither of these 2 studies was the exact route of contamination determined, but their results clearly indicate that cross-contamination remains a problem in digital radiography.

Given the paucity of published information on the subject of barrier integrity, this study was undertaken to test the efficacy of the barrier envelope used to isolate PSP plates from contamination with biological fluids.

This study used the no. 2 PSP plate (30 mm × 40 mm) and barrier system (Scan X #0 Barrier Envelopes [PN 73248-0]) supplied by Air Techniques (Corona, CA), with a Rinn film holder (Dentsply, Elgin, IL). The PSP plates used in this study were old and had been taken out of service; they were used only for the purpose of this study.

The study involved 52 PSP plates: 12 inserted into the mouths of each of the 2 authors of this study and one for each of 28 patients recruited from the final-year dental clinic at the University of British Columbia. Patients were approached in writing to request participation, and they had the option to refuse (with further dental care not being contingent on their participation). The Clinical Research Ethics Board at the University of British Columbia approved the protocols involving human subjects.

Because barrier integrity was the focus of the study, great care was taken to ensure asepsis of the PSP plates. The asepsis procedure described below was carried out only for this experimental study; it is not a standard operating procedure used in the dental school.

Working in a class II biological safety cabinet (Canadian Cabinets, Ottawa, ON), an operator wearing barrier gloves wiped each PSP plate twice with a 70% ethanol wipe. The efficacy of this 70% ethanol disinfection was formally tested, as follows. Two sets of PSP plates were contaminated by immersion in trypticase soy broth to which saliva had been added 24 hours earlier. Half of the plates were treated with ethanol wipes as described, and the remaining contaminated plates were left untreated. Both groups of PSP plates were then immersed in fresh sterile trypticase soy broth, and aliquots were plated on trypticase soy agar.

Each barrier envelope containing a PSP plate was placed into a bite block, which was then placed in the mouth of a volunteer or patient, adjacent to the mandibular molars, for simulation of a periapical radiographic exposure. Each barrier envelope was left in place intraorally for 1 minute, but no radiographic image was taken (i.e., no volunteers or patients were exposed to radiation). A faculty radiologist (D.S.M.) placed the bite blocks for the 24 PSP plates in the mouths of the authors. Fourth-year dental students placed the bite blocks for the 28 clinic patients. After the 1-minute exposure to the oral environment, the  PSP plates, still in their barrier envelopes, were transferred to a biological safety cabinet for processing.

To evaluate microbiological contamination of individual PSP plates, each barrier envelope was cut above the detector with sterile scissors. The PSP plate was then carefully removed with sterile forceps and placed in 3 mL of trypticase soy broth in a 60 × 15 mm petri dish for 1 minute. Instances when the PSP plate could not be removed cleanly without contacting the edge of the envelope were noted. After exposure of each PSP plate to the broth, 0.5 mL of broth was then plated on trypticase soy agar.

All trypticase soy agar plates were allowed to dry and were incubated aerobically, along with a control plate, at 35°C for 2 days. At the end of the incubation period, the bacterial colonies were counted, and the counts were adjusted to total number of colonies per 3 mL. The presence of colonies, not their size, was the factor used to determine bacterial contamination. It was assumed that the presence of any growth indicated failure of the barrier envelope.

Testing of the disinfection process with PSP plates that had been deliberately contaminated with oral microflora indicated 100% kill. This provided assurance that the PSP plates were sterile before placement in the mouths of participants.

Quality assurance checks indicated that 2 PSP plates had been incorrectly sealed in their respective barrier envelopes. In 2 additional cases, the barrier envelope containing a PSP plate was perforated by the forceps. Three (75%) of these 4 PSP plates (placed by D.S.M.) became contaminated after placement in the oral environment (Table 1).

The third and final analysis was designed to determine the extent of integrity of the barrier envelopes after use in a clinical setting and whether this integrity could be affected by clinical skill. Of the 44 PSP plates in barrier envelopes that passed the quality assurance test and were extracted cleanly after a 1-minute exposure to participants’ oral environment, 24 were placed by fourth-year dental students and 20 were placed by D.S.M. Subsequent culture revealed that 2 (8%) of the 24 PSP plates placed by students and 1 (5%) of the 20 PSP plates placed by the radiologist had unexplained contamination.

PSP plates are reused many times in a variety of intraoral placements, which leads to the possibility of cross-contamination, the most likely source being contact with the oral environment. This study tested the efficacy of barrier envelopes designed to isolate PSP plates from contamination by biological fluids.

Every effort was made to ensure that the PSP plates used in this study were not contaminated. It was therefore interesting to note a substantial level of unexplained contamination among the PSP plates placed by dental students (8%) and a radiologist (5%). Although these results are not conclusive, it appears that the integrity of the barrier envelope may not be affected by clinical skill.

There are only 2 possible explanations for the contamination observed in these instances. First, manufacturing defects in the production of the barriers may have resulted in leakage. Second, the barrier may have been compromised by the mechanical stress of placement, occupancy and subsequent retrieval from the mouth. From the study reported here, it was not possible to distinguish between these 2 possibilities.

Most dispensaries do not have quality assurance protocols for assembly of PSP plates in barrier envelopes, nor do they typically have standard operating procedures for removal of a PSP plate from its envelope. It is therefore possible for contamination to spread between PSP plates during their manipulation. The findings reported here are supported by other studies. Investigators evaluating gas sterilization in combination with barriers for PSP plates found bacterial growth on 56% of the PSP plates (with 76% of the bacterial colonies from selected contaminated PSP plates being affected by oral streptococci, as indicated by growth on Mitis Salivarius agar). This contamination was observed despite weekly gas sterilization and application of a 70% alcohol wipe between patients.1 Similarly, in an investigation of PSP plates in multiple-use tests, the authors found that 61% of the detectors were contaminated with oral streptococci after 24 hours of culture.2 Unlike these earlier studies, the current study included attempts to identify the route or routes of contamination.

Given the current findings and the results of previous studies,1,2 it is clear that infection control challenges remain in the area of digital intraoral radiography. Consequently, several issues must be considered when using PSP plates. First, each PSP plate must be disinfected between its removal from the contaminated barrier envelope and placement in a new barrier envelope. Second, placement should ideally be carried out under aseptic conditions. Finally, the integrity of the sealed barrier envelope for each PSP plate must be visually inspected before release to the clinic.

Acknowledgements: We are grateful to Dr. Andrea Esteves, clinic director, and Dr. Joanne Walton, associate dean of academic affairs, for access to the clinic and for permission to approach the students respectively. We also thank the fourth-year students (2010-2011) and their patients for their participation in this study.