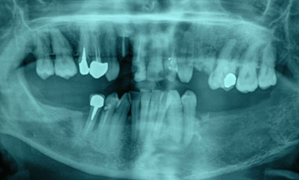 Breast carcinoma is the leading cause of cancer death in women. Metastatic tumours of the oral cavity arising from breast cancer (and other forms of cancer) may be similar to hyperplastic or reactive lesions. They are uncommon and typically appear when various organs have already been affected by the neoplasia. A 53-year-old woman presented with "discomfort" in her left mandible, specifically, swelling of recent onset accompanied by progressive loss of sensation. The mandibular swelling had been preceded by neuralgia involving the trigeminal nerve. Biopsy and histologic examination of the intrabony mass revealed ductal adenocarcinoma with infiltration of bone and stromal tissues. The lesion was determined to be metastatic from previously undiagnosed breast cancer. The neuralgia was also related to a metastatic lesion.

Breast carcinoma is the most common cancer among women in the United States. The incidence rate of breast cancer is similarly high in several European and other highly industrialized countries, where it is the most common cause of cancer-related death. This form of cancer is less common in low- and medium-resource countries, but its incidence and mortality rates in these countries have been increasing over the past 20–30 years.1 Premature menarche, late pregnancy (after 30 years of age), late menopause, absent lactation, excess weight or obesity after menopause, postmenopausal hormone therapy, sedentary lifestyle and alcohol consumption are recognized as risk factors for breast cancer.2 Currently, about 40% of all patients with breast cancer may experience recurrence after treatment. The risk of recurrence is higher in the first 2–3 years after treatment and tends to decrease with time, although the risk does not disappear completely. Only 10%–20% of all relapses of breast cancer are locoregional, whereas 60%–70% occur as distant metastases.3 Patients with breast cancer are at risk of disease spread for an extended period, and metastases may appear as long as 20 years after onset of the primary tumour or after periods when the primary tumour was absent.4 At present, the average survival time for patients with metastatic breast cancer ranges from 20 to 28 months, and survival varies according to cancer biology, type of metastasis and monitoring of treatment.3

A 53-year-old woman presented to the department of oral pathology with oral "discomfort." The discomfort was related to a swelling in her left mandible, which had become established in the preceding 2 months and which was accompanied by a tingling sensation on the left side of the lip. The patient had experienced a gradual reduction in sensation, to the point of total loss of sensitivity. The patient also noted constant draining of saliva in the left labial commissure and loss of food and liquids while eating. The patient had no notable medical history, but 4 months before (i.e., 2 months before onset of the swelling) she had experienced a form of "neuralgia." Several times a day, she experienced a sudden, stabbing pain sporadically affecting all 3 branches of the trigeminal nerve (mandibular, maxillary and ophthalmic). The episodes of pain had increased and intensified day by day. The patient had been examined by a neurologist, who diagnosed neuralgia of the trigeminal nerve. The neurologist prescribed pharmacological treatment with carbamazepine (400 mg 3 times a day) and pregabalin (300 mg twice a day), which did not relieve the pain.

Physical examination at the time of the current presentation confirmed unnatural pallor of the skin and mucous membranes, and the patient's suffering was clearly evident. Extraoral examination showed pronounced facial asymmetry caused by the swelling in the left part of the mandible, associated with marked difficulty in opening the mouth (trismus). Palpation of the neck revealed bilateral lymphadenopathy. The clinical intraoral examination showed swelling of the mucous membrane extending from the molars to the lower left premolars. Palpation of the bone mass revealed that it was hard, ligneous, painful and adherent to deep structures.

Contrast-enhanced computed tomography (CT) of the viscerocranium was ordered immediately (Figs. 2–4). The CT scan showed a large area of bone destruction in the left mandible. This area was occupied by vascular tissue interrupting the cortical bone and penetrating the soft tissues anterolaterally. Similar but early-stage damage was apparent in the mandibular condyle on the same side. The contrast enhancement allowed detection of another lesion on the right side, which was confined to the body of the mandible and did not affect the cortical area. In addition, tumefaction of the laterocervical lymph nodes was observed on the left side. 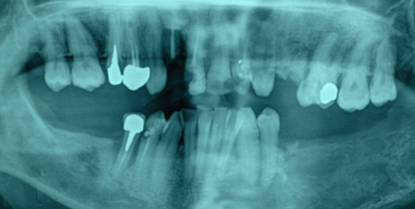 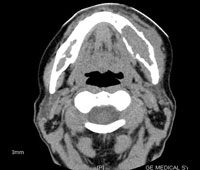 Figure 2: Computed tomography shows large areas of transparency in both the right and left mandibular bodies. 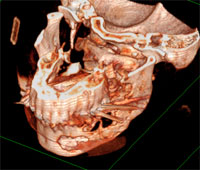 Figure 3: Three-dimensional reconstruction from computed tomography scans shows that the metastasis has eroded the cortical bone near the premolars. 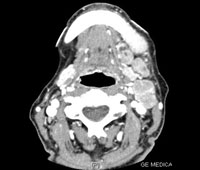 Biopsy and histologic examination of the bone mass revealed ductal adenocarcinoma with infiltration of the bone and stromal tissues. A hormone receptor test showed strong positivity for estrogen and progesterone receptors (90% and 15% of cells, respectively). Immunophenotyping revealed high levels of GCDFP-15 (gross cystic disease fluid protein 15) and E-cadherin, as well as focal positivity for cytokeratin 7. The histologic and immunohistochemical findings confirmed the presence of a mammary adenocarcinoma. The patient was admitted to hospital for further instrumental and laboratory exams, but she died of acute pulmonary edema and heart failure the next day. Autopsy revealed the primary tumour in the right breast and secondary lesions in the liver, lungs, bone and brain. Tissue samples were taken for microscopic examination. Histologic examination allowed diagnosis of ductal adenocarcinoma infiltrating the breast tissue, and a hormone receptor test on the primary cancer and metastatic tissue confirmed high positivity for estrogen and progesterone receptors. One of the cerebral metastases was particularly interesting, because it was localized in the middle cranial fossa, near the apex of the petrous pyramid (where the trigeminal ganglion is situated). This lesion was attached to the meningeal membranes and to the ganglion.

Metastatic tumours of the oral cavity are uncommon, and existing documentation is therefore based mostly on isolated cases. Oral metastatic lesions usually appear when various organs have already been affected by the neoplasia. However, in 25%5 to 30%6 of cases, oral metastatic lesions are the first laboratory finding allowing diagnosis of a primary cancer. In such cases, it is important to perform more specific radiographic examinations, such as full-body scanning and/or positron emission tomography.6

Gerber and colleagues3 examined the literature published between 1999 to 2009 for articles about recurrence of breast cancer. These authors found the following main anatomic localizations of metastatic lesions from breast cancer, with recurrence rates as summarized in Table 1. The clinical case presented here is in agreement with these data.

Neoplastic cells spread from their initial location to the oral cavity through the bloodstream and the lymphatic vessels.7 The most common site of metastatic lesions inside the oral cavity is the mandible (80%), particularly in the molar and retromolar areas.8 The maxillary bones are more frequently affected than oral soft tissues (in a ratio of 2:1). In the oral soft tissues, the attached gingiva is most commonly affected (54%). The main tumour types associated with oral metastatic lesions are lung, kidney, liver and prostate cancers in male patients and breast, genital, kidney and colorectal cancers in female patients. Metastases in the oral cavity are detected after diagnosis of the primary tumour in 70% of cases, whereas in 30% of cases, these lesions are the first manifestation of unknown primary cancers.8

In the case reported here, the patient's symptoms did not indicate a primary cancer with distant metastases. Her first symptom, neuralgia involving the trigeminal nerve, was treated as a primary form of disease. However, this pain was probably generated by cerebral metastases located near the trigeminal ganglion, which compressed the nerve causing neuralgia unresponsive to pharmacological treatment. The frequency and intensity of the pain increased with progressive growth of the metastatic lesions and more severe nerve compression. Therefore, the neuralgia involving the trigeminal nerve may be considered this patient's first symptom of neoplasia. The medical literature includes reports of cases of neuralgia involving the trigeminal nerve caused by melanoma, colon cancer or breast cancer metastases affecting the pterygopalatine fossa, but a secondary lesion causing direct compression of the trigeminal ganglion9-11 has not previously been reported. In addition, the laboratory examinations clearly showed hepatic illness. Autopsy revealed that these findings were related to numerous metastatic lesions in the liver. Secondary lesions were also detected in the lungs and the bones. In this case, the initial radiographic examination of the dental arches, showing an osteolytic lesion with irregular contours, was of great importance. An intraosseous lesion with irregular margins requires further topography-specific radiographic procedures, to allow assessment of the extent of the lesion and its relationship with the surrounding tissues and with the vascular and nervous structures.

Oral metastatic lesions may be similar to hyperplastic or reactive lesions, pyogenic granulomas, peripheral giant cell granulomas or fibrous epulides.5 Oral metastases may be asymptomatic or may cause pain, ulcers, paresthesia, bleeding, periodontitis, trismus or pathological fracture. They may appear quickly after onset of the primary cancer. In cases of an oral lesion where metastasis is suspected, it is important to perform a biopsy (as well as appropriate clinical and instrumental examination) to allow the correct diagnosis and appropriate planning of treatment. Unfortunately, the prognosis for these patients is invariably poor.