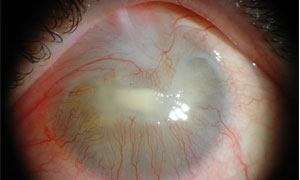 View letters related to this article

Calcium hydroxide, widely used in endodontic treatment, is a strong base that may cause irreversible injury to vital tissue that comes into contact with this substance. We present the first case of a dentist who accidentally splashed endodontic calcium hydroxide into her own eye. After washing with copious amounts of water for several minutes, she was treated in the hospital within 30 minutes of the accident. Because of the burning caused by the base solution, the dentist lost vision in the affected eye. She returned to the hospital several times for treatment of a corneal abscess and corneal fungal infection. She had the keloid that formed between the eyeball and eyelid removed 3 times. Calcium hydroxide can cause blindness when it comes into contact with the eye. Clinicians should take adequate precautions to prevent this serious complication. In case of an accident, it is important to wash the eye efficiently.

Here, we present a case of a calcium hydroxide intracanal dressing accidentally splashed into the eye of a dentist during root canal therapy that resulted in the loss of all sight in the injured eye. To our knowledge, no similar case has been previously reported.

A dentist accidentally splashed calcium hydroxide into her own eye while applying an aseptic endodontic treatment to a second mandibular premolar. When the dentist tried to apply a calcium hydroxide intracanal dressing (Calasept, Scania Dental, Sweden) directly from a syringe with a needle, she found that the needle was blocked. To examine the patency of the needle closely, she removed her protective glasses and pressed the syringe plunger. The preparation then ejected from the needle directly into her left eye, causing an instant, strong, burning pain. The dentist immediately proceeded to rinse her eye with tap water for several minutes. During this procedure, she felt a sharp, unpleasant, tearing chest pain that radiated out to both shoulders and the mandible. With help, she went to the hospital and underwent treatment about 30 minutes after the incident. The treatment at the hospital included cleaning the remaining calcium hydroxide from the conjunctival sac and its fornices, prolonged rinsing of the conjunctival sac with 0.9% sodium chloride, administering the patient’s own blood under the conjunctiva, and neutralizing the calcium hydroxide with sodium edetate, according to the treatment protocol.

The ophthalmic examination revealed a lack of tear secretion, shortening of the conjunctival sack (adhesion between the palpebral conjunctiva and the ocular conjunctiva), swollen palpebral and ocular conjunctivas, and burned tissue. The cornea was deeply burned, appearing opaque like porcelain. Corneal fluorescein staining was positive, indicating damage to the cornea. Other sections of the eye could not be examined clinically because of the lack of corneal translucency.

The symptoms of chest pain suggested a diagnosis of myocardial infarction, which was confirmed by cardiac diagnostics. Both cardiac and ophalmologic treatments commenced concurrently. Intensive conservative pharmacological treatment was applied to the eye; however, because of the chemical burn, oculopalpebral adhesions had formed, and the conjunctival sac had become shallow because of adhesions between the ocular and palpebral conjunctivas. The dentist lost vision in the injured eye because of the burning. She returned to the hospital several times for treatment of a corneal abscess and corneal fungal infection (Fig. 1). In addition, she had a keloid that formed between the eyeball and eyelid removed 3 times, and plastic surgery on the conjunctiva 3 times. 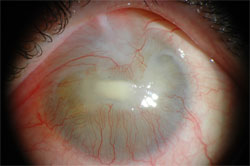 Chemical eye injuries caused by exposure to acids and alkalis (bases) are the most common type of ocular burn. Alkali burns are typically more serious than acid burns because the alkali can rapidly penetrate the cornea into the anterior chamber of the eye (5–15 minutes) and damage the iris, ciliary body, lens and trabecular network.11-13 Alkali damage includes saponification of cell membranes, cell death and disruption of the extracellular matrix. Alkalis can continue destroying tissues within the eye for several days. Penetration rates differ with different types of alkalis. One of the most rapidly penetrating alkalis is ammonium hydroxide, followed by sodium hydroxide, potassium hydroxide, calcium hydroxide and sodium hypochlorite. Although calcium hydroxide penetrates more slowly than several other alkalis, it quickly saponifies membranes, and the newly created soap particles tend to gather in the fornices that provide a reservoir for ongoing injury.14,15

In this case report, a dentist lost total sight in one eye after splashing calcium hydroxide into her eye. To our knowledge, this is the first case of a chemical injury to the eye caused by endodontic calcium hydroxide. However, Ingram16 reported a case of a corneal burn caused by splashing a 5.25% sodium hypochlorite solution into the eye of a patient during endodontic therapy. In that case, the hypochlorite caused only slight edema of the conjunctiva and loss of epithelial cells in the cornea. Two days after the accident, the patient was asymptomatic and seemed completely healed. However, the dentist in this case report had severe damage and lost all sight in the affected eye. This was probably due to the ineffective removal of the calcium hydroxide at the site of injury, likely because the calcium hydroxide was trapped in saponified tissues, which made it difficult to remove from the recesses of the eye. For effective removal, the eyelid should be flipped inside-out, but this was done too late for our patient. Mechanical removal of the particles in her eye was done in the hospital 30 minutes after the injury.

Alkali substances can penetrate the cornea to the anterior chamber of the eye and cause irreversible destruction of the deeper structures of the eye within several minutes. Training health care personnel in the skills of turning the eyelid inside-out and thorough eye washing on site within the first few minutes of an accident is of prime importance. According to the latest guidelines, the eye should be washed for several minutes with saline or tap water; specialist help and treatment should be sought immediately after washing is completed.

This case report emphasizes the importance of taking special care with calcium hydroxide, a commonly used endodontic treatment, to avoid eye contamination because it can cause blindness. Both the patient and the care provider should wear eye protection, such as glasses or a dental safety face mask. If calcium hydroxide is splashed into the eye, the eyelid flip should be done immediately with copious washing, followed by prompt ophthalmologic consultation.