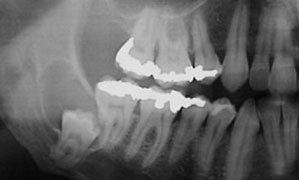 As dentigerous cysts increase in size, the risk of postsurgical complications increases as well. Emphasis is usually placed on the risk of neurologic damage caused by trauma during and after surgical removal and of mandibular fracture resulting from the large residual bone defect. However, influence on the periodontal status of neighbouring teeth should also be taken into account. In this article, we present an interdisciplinary, safe, minimally invasive approach to treating large dentigerous cysts associated with deeply impacted third molars.

A dentigerous cyst is an epithelial-lined pathologic cavity that develops in association with the crown of an unerupted tooth and appears radiographically as a well-circumscribed pericoronal radiolucency.1 The cyst not only inhibits the eruption of the associated tooth (usually, a mandibular third molar),2 but can also carry it to unusual positions in the jaw.3-5

Dentigerous cysts may enlarge causing extensive bone resorption and even pathologic fracture.6 The greater the size of the cyst, the higher the risk of neurologic damage caused by trauma during and after surgical removal and of mandibular fracture resulting from the postoperative bone defect.7,8 Moreover, the removal of large cysts can lead to a severe infrabony defect at the root surface of adjacent teeth, jeopardizing their long-term periodontal health.

“Orthodontic extraction” is a combined orthodontic–surgical approach that decreases the risk of neurologic complications and facilitates the surgical extraction of impacted mandibular third molars that are in close contact with the mandibular canal,9-12 even when associated with cystic lesions.13 This case report shows that the interdisciplinary approach is also effective in preventing periodontal breakdown on the distal surface of the adjacent second molar.

A healthy 33-year-old man was referred by his general practitioner to the department of periodontology for treatment of a large cyst and associated impaction of the right mandibular third molar.

Panoramic radiography revealed a large, well-defined radiolucency surrounding the crown of a deeply impacted right mandibular third molar and involving the distal root of the adjacent second molar (Fig. 1). An initial diagnosis of dentigerous cyst was made (histopathologic examination would be necessary for a conclusive diagnosis). The impacted tooth was in a vertical position, with its root apices in close proximity to the inferior border of the mandible and its crown’s mesial cusp lying lateral and close to the distal root of the adjacent second molar. Computed tomography confirmed a close anatomical relationship between the molar roots and the mandibular canal, as well as between the cyst and the mandibular canal (Fig. 2). 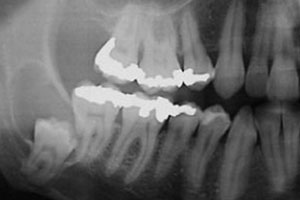 In addition, a small amount of bone seemed to be present at the distal surface of the right mandibular second molar and this raised concern about the long-term periodontal prognosis for this tooth. Clinical evaluation revealed a probing pocket depth of 9 mm on the lingual side and 7 mm on the buccal side of distal root surface of the second molar. Crestal bone loss was also estimated from the radiograph; the distance from the cementoenamel junction to the bottom of the bone defect was 16 mm, confirming its severity.

Because of the extent of local bone resorption, the proximity of the lesion and tooth to the inferior alveolar nerve and the depth of tooth impaction, orthodontic extraction together with cyst marsupialization were the treatment of choice.

Before surgery, an orthodontic appliance was installed to create a stable anchorage and prevent undesirable movements of other teeth resulting from the application of extrusive force to the impacted molar. A lingual arch was cemented to the mandibular first molars, and a passive sectional stainless steel wire was bonded directly to the buccal surface of the mandibular right molars and premolars using a light-cured composite resin.

Subsequently, the cyst was marsupialized under local anesthesia, the crown of the impacted tooth was surgically exposed and an orthodontic buttonhole was bonded directly to it (Fig. 3). During surgery, an incisional biopsy specimen was taken from the cyst wall;  histologic examination confirmed the initial diagnosis of dentigerous cyst (Fig. 4).

Figure 3: Surgery included: a) exposure of the cyst lumen; b) exposure of the crown of the third molar and bonding of an orthodontic buttonhole to it; c) creation of cortical perforations for marsupialization; d) partial wound closure. 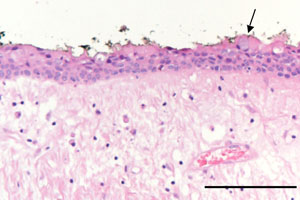 After 1 week of healing, the orthodontic appliance was activated. A cantilever was attached to the mandibular right first molar and tied to the occlusal surface of the impacted tooth, thus stimulating tooth eruption.

After 7 months of orthodontic extrusion, radiography showed a significant reduction in the size of the cystic cavity and the apposition of new bone on the distal surface of the second molar (Fig. 5). As the roots of the impacted tooth were now farther from the mandibular canal, it was decided to deactivate the cantilever and extract the third molar after a 3-month retention phase. During surgery, the cyst was also completely removed. Tooth extraction was simple, and healing was uneventful with no neurologic damage. At 2 years follow up, probing pocket depth was 2 mm on the lingual side and 3 mm on the buccal side of the distal root surface of the second molar; a large amount of crestal bone apposition was detected on the radiograph and crestal bone loss was now only 2 mm — an 87.5% reduction in the extent of the bone defect compared with the initial observation (Fig. 6). 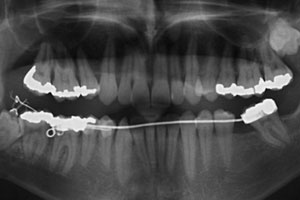 Figure 5: After 7 months of orthodontic extrusion, panoramic radiography shows a reduction of the cystic cavity and apposition of bone on the distal surface of the right mandibular second molar. 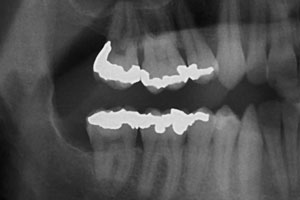 Figure 6: Panoramic radiograph at the 2-year follow -up. Only a minimal bone defect remains on the distal surface of the second molar.

In this case, the advantages of marsupialization — which is known to allow for some bone filling of the residual cavity as cyst decompression occurs8,14-16 — were combined with the positive effects of the orthodontic extraction technique,9-13 in which extrusive movement creates tensional forces on the periodontal fibres, resulting in new bone apposition along the tooth eruption path.17 As the tooth was impacted vertically, rather than horizontally, more bone apposition could be expected because of a greater shift in the cementoenamel junction.10

Meticulous oral hygiene was maintained during the therapy and root scaling at the distal aspect of the second molar adjacent to the impacted tooth was carried out during the initial surgery to remove any plaque deposits or toxins that might interfere with periodontal tissue healing.

No direct neurologic damage occurred as, before extraction, tooth roots were progressively pulled away from the alveolar nerve by the orthodontic traction. Moreover, at the time of extraction, the tooth had a certain mobility, which reduced the need for surgical instrumentation. This decreased the risk of indirect trauma to the nerve due to postoperative edema or hematoma and allowed more bone to be saved distal to the second molar.

Others have proposed an extraoral surgical approach under general anesthesia for removal of deeply impacted mandibular third molars associated with dentigerous cysts.3-5 Although this would allow better surgical access, it involves a high risk of postoperative iatrogenic mandibular fracture because of a severely compromised inferior border and of neurologic complications because of facial nerve involvement.

Marsupialization is performed under local anesthesia without exposing the patient to the risks of general anesthesia. The intraoral approach eliminates the possibility of an unesthetic scar. Furthermore, filling of the residual cavity with bone tissue seems to be enhanced when marsupialization is combined with orthodontic extraction of the cyst-associated tooth.

Unfortunately, a tooth with an unhealthy periodontal membrane cannot be moved orthodontically, and the surgical–orthodontic approach is contraindicated in the case of ankylosis. Disadvantages of this technique include the need for two surgical operations (first, marsupialization of the cyst and exposure of the tooth, then later extraction of the tooth) and a long series of appointments, which make this approach more time-consuming and expensive than simple cyst enucleation and tooth extraction. Some discomfort may also be caused by the orthodontic appliance.

We have shown orthodontic extraction together with cyst marsupialization to be effective in treating large dentigerous cysts associated with deeply impacted mandibular third molars. Such an interdisciplinary approach makes surgery easier, greatly reduces the risk of postsurgical complications and appears to be advantageous in terms of the periodontal health of adjacent second molars.

Acknowledgements: The authors are grateful to Dr. Serena Incerti Parenti, department of orthodontics, School of Dentistry, University of Bologna, for her important assistance in preparing the manuscript.