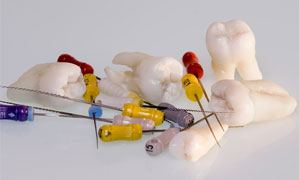 Objective: To compare 2 irrigation solutions in terms of postoperative pain after single-visit treatment of chronic apical periodontitis with pulp necrosis.

Methods: A total of 126 patients requiring treatment of apical periodontitis and pulp necrosis were randomly assigned to 2 groups according to the solution used for irrigation: 5.25% sodium hypochlorite (NaOCl) or 2% chlorhexidine gel (CLX) (63 patients in each group). To assess postoperative pain, a questionnaire and pain intensity scale were administered at 24, 48 and 72 hours and 7 days after the procedure. The χ2 test was used to compare the intensity of pain with the 2 irrigation solutions.

Conclusions: The incidence of postoperative pain after single-visit endodontic treatment of chronic apical periodontitis with pulp necrosis was uniformly low, regardless of the irrigant used.

The success of endodontic treatment is directly associated with infection control.1-5 The literature indicates that rotary, hand or hybrid instrumentation, even when performed correctly, is inadequate to clear all organic and inorganic debris from the root canal system.6-8 For this and other reasons, irrigating solutions play an important role, making up for the shortcomings of instrumentation and complementing endodontic disinfection procedures.8

Sodium hypochlorite (NaOCl) solution is the standard irrigant for cleansing and disinfection of the root canal.3 It has antimicrobial and histolytic characteristics, among other properties.9 However, NaOCl may be cytotoxic to the periradicular tissues, particularly at high concentrations.10,11 As such, postoperative pain is a concern when highly concentrated NaOCl solutions are used in single-visit treatment of nonvital teeth because of the risk of extravasation of the irrigant into these tissues.12 Some investigators have suggested 2% chlorhexidine gel (CLX) as a good choice of irrigant for necrotic teeth because of its antimicrobial action, high substantivity and low toxicity.13,14 In addition, CLX may be less caustic than NaOCl.12 However, Mohammadi and Abbott5 reported that despite acceptable biocompatibility, CLX is also potentially cytotoxic and may induce allergic reactions, though rarely. Direct comparison of NaOCl and CLX in a randomized clinical trial, in terms of their influence on postoperative pain, was therefore warranted.

The study described here involved in vivo assessment of the incidence of postoperative pain after single-visit endodontic treatment of patients with radiographically visible chronic apical periodontitis and necrotic pulp, with either 5.25% NaOCl or 2% CLX plus normal saline (0.9% NaCl) as the irrigant.

This prospective randomized clinical study was approved by the São Leopoldo Mandic Center for Dental Research Ethics Committee (protocol no. 2008/0346). All patients were informed of the purposes of the study and provided written informed consent. The study was conducted in accordance with the provisions of the Declaration of Helsinki.

Patients who spontaneously sought care at the dental practices of the 2 lead investigators (G.A. and R.S.C.), both trained endodontists with over 10 years of clinical experience, were recruited for the study.

Patients were eligible for inclusion in the study if they had no relevant comorbid conditions; had received no antibiotics, anti-inflammatories or analgesics for at least 1 week before the study treatment; had no preoperative pain; and had a diagnosis of chronic apical periodontitis with periradicular bone loss and apical patency. Patients were excluded if they had calcified teeth, deep periodontal pockets, persistent exudate, or incomplete root formation, or if there was failure to achieve apical patency. Patients with immunosuppression or immunocompromise were also excluded.

The study sample consisted of 126 patients, each seeking treatment for a single tooth (Table 1). Any patient seeking treatment for the target condition was eligible for inclusion, regardless of which tooth required treatment. To minimize allocation bias, the patients were randomly assigned to 2 balanced groups by means of a restricted adaptive randomization procedure. For one group, 5.25% NaOCl (Farmácia Fórmula & Ação, São Paulo, SP, Brazil) was used as the irrigant during treatment, and for the other group, a mixture of 2% CLX (Farmácia Fórmula & Ação) and normal saline (L.B.S, São Paulo, SP, Brazil) was used. 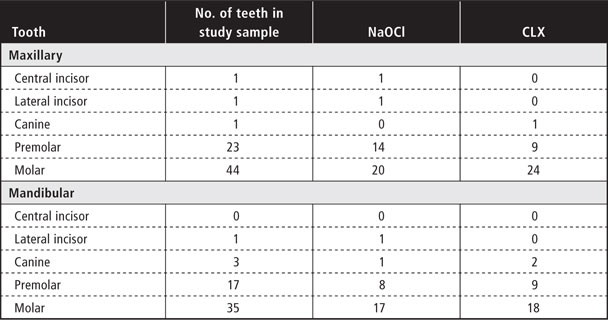 After removal of caries-affected tissue, placement of rubber dam for isolation and establishment of access to the root canal, the pulp chamber was flushed with the designated irrigant by means of a 5-mL disposable syringe (Injex, Ourinhos, SP, Brazil) and a 20 × 0.55 mm needle (Nipromed, Sorocaba, SP, Brazil) so that the needle would stay loose inside the canal. Instrumentation was performed with a crown-down technique, using ProTaper Universal rotary files (Dentsply/Maillefer, Ballaigues, Switzerland) and hand files (K-files and Flexofiles, Dentsply/Maillefer). Initial exploration was performed with a size 10 or size 15 K-file, followed by S1 and SX rotary files. Coronal flaring was completed with size 4, 3 and 2 Gates–Glidden drills (Dentsply/Maillefer) in a crown-down fashion, respecting the natural anatomy of the canal, keeping a constant 5-mm distance from the radiographically determined apical limit and, in curved canals, going as far as the beginning of the curve. The preparation length was kept 1 mm short of the apical foramen, as defined by a Root ZX II apex locator (J Morita, Kyoto, Japan).

Apical patency was determined with a size 10 or size 15 file, and irrigation with 2 mL of the appropriate solution for each group was performed each time instruments were switched. S1, S2, F1, F2 and F3 rotary files were used for shaping, followed by cavity refinement with a minimum size 25, 30 or 35 Flexofile, depending on the anatomy of the canal. Again, irrigation with 2 mL of the specified solution was performed each time instruments were switched. Apical patency was maintained with a size 10 file. After shaping, the smear layer was removed with 10 mL of 17% ethylenediaminetetra-acetic acid (EDTA) (Farmácia Fórmula & Ação) applied with an ultrasonic cavitation unit (Enac, Osada, Japan) for 3 minutes, followed by a final washout with 5 mL of 5.25% NaOCl for the NaOCl group or 10 mL of normal saline for the CLX group. Each tooth was immediately subjected to obturation with the warm vertical condensation (System B) technique, with gutta-percha and Pulp Canal Sealer EWT (Sybron Endo, Orange, CA, USA); back-filled by means of the Obtura II system (Obtura Spartan, Earth City, MO, USA); and dressed with Cimpat, a premixed, non-eugenol, temporary filling material in paste form (Septodont, Saint-Maur-des-Fossés, France), and Z-250 resin composite (3M, Sumaré, SP, Brazil).

Each participant received a questionnaire for assessment of pain (on a self-explanatory scale) and determination of frequency of use of analgesics after the root canal procedure, to be filled out at 24, 48 and 72 hours and 7 days after completion of endodontic treatment. Each participant also returned in person for assessment. Pain was classified on a 4-point scale, where 0 = absent, 1 = mild (not requiring analgesia), 2 = moderate (relieved by analgesia) and 3 = severe (not relieved by analgesia).

The Pearson χ2 test was used to compare pain intensity between the 2 groups at 24, 48 and 72 hours and 7 days after the procedure. The significance level was set at p = 0.05.

For all time points evaluated, there were no significant differences between the 2 groups in terms of postoperative pain (p > 0.05) (Table 2). None of the patients in either group reported severe pain. Pain levels decreased with time elapsed since the procedure; the worst period was 24 hours after the treatment, when 2 (3%) of the 63 patients in each group experienced moderate pain.

One approach to modern endodontics is completion of required therapy in a single visit and prospective, randomized clinical trials have provided evidence of the reliability of single-visit endodontics.1,15-20

One aspect of success in endodontic therapy is the minimization of postoperative pain; however, the frequent occurrence of such pain has been a concern since the late 1880s.21 Discomfort after endodontic treatment is usually ascribed to a tissue response caused by one or more factors, including failure at the cleaning and shaping stages, presence of infected debris and damage to the pulp.4 Overinstrumentation may be a mechanical cause, whereas chemical factors include extrusion of intracanal medications, filling materials or irrigants.22 Sample selection for the present study was restricted to patients with chronic apical periodontitis precisely because these patients are at increased risk of postoperative pain23; however, meticulous aseptic technique was followed to minimize risk of microbial exacerbation of any pain. Likewise, because preoperative pain is one of the strongest predictors of postoperative pain, the study was restricted to patients without any preoperative pain.24

Unfortunately, it is difficult to objectively measure a patient’s level of discomfort; data for this variable therefore depend on subjective information provided by patients themselves and are subject to error. In this study, postoperative pain was measured by means of a questionnaire and a 4-point pain intensity scale, similar to methods used in several previous studies.24-27 In contrast, Figini and colleagues4 assessed pain according to only 2 levels: “discomfort” and absence of pain.

Previous authors have assessed the toxicity of irrigating solutions and the severity of inflammation caused when endodontic medications contact the periapical tissues and have shown that these factors play a role in the occurrence of postoperative pain after single-visit treatment of teeth affected by apical periodontitis.3,11,28-30 However, previous studies have led to divergent opinions about the best choice of irrigant for optimal disinfection of the root canal system with the least possible damage to the periapical tissue.3,5,9,12,14 Therefore, a head-to-head comparison was chosen for this study of 2 chemical compounds in terms of pain occurring after endodontic treatment.

NaOCl is currently the irrigant of choice because of its chemical properties, which make it an effective cleanser and disinfectant of the root canal system and an excellent solvent for organic tissue.3 A concentration of 5.25% was chosen to ensure more effective antimicrobial action (than would be the case with a lower concentration) and stability of histolytic activity,12 and because high-concentration solutions may have greater potential for dissolution of debris in areas that cannot be reached by endodontic instrumentation.9 However, high concentrations substantially increase the toxicity of this irrigant and, in cases of extravasation, could lead to postoperative pain.10 Conversely, CLX with normal saline has been suggested by some investigators as a good choice of irrigant for necrotic teeth because of its antimicrobial action, high substantivity and low toxicity.13,14 It should not, however, be used as the sole irrigant, as 2% CLX cannot dissolve organic matter.9,12

Both of the irrigants tested in this study (5.25% NaOCl and 2% CLX gel with 0.9% NaCl) were associated with low rates of postoperative pain among patients undergoing single-visit endodontic treatment for chronic apical periodontitis with pulp necrosis. It is likely that as long as the selected irrigant is kept inside the root canal by means of a low-pressure irrigation technique, postoperative pain and flare-ups can be avoided.