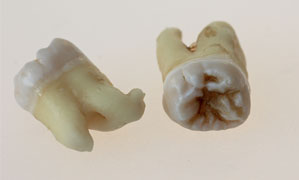 Third molar extraction is one of the most common oral surgeries performed on Canadian patients, particularly young adults. Vigorous debate persists about the risks of retention of asymptomatic impacted third molars, compared to extraction. The controversy centres on whether medical necessity justifies the cost of third molar extraction for the patient in terms of substantial pain and potential loss of income during recovery and for the federal or provincial health care systems, which may be billed for a portion of the surgical fees. Several research studies initiated by the American Association of Oral and Maxillofacial Surgeons (AAOMS) report new associations between oral disease and asymptomatic impacted third molars. These findings merit careful attention because they are being used by the AAOMS to advocate for prophylactic third molar extraction—an approach that contradicts the conclusions of a Canadian health technology report, American Public Health Association policy, and health technology reports from Sweden, Belgium and the UK. The decision to extract third molars seems most effective when made on a case-by-case basis that is tailored to each patient’s health status and access to professional oral health care.

In Saskatchewan, a province of over one million people and where the author is based, at least one provincial insurance provider processed claims for almost 13 500 third molar extraction surgeries between 2007 and 2011 at a cost of over $2.2 million dollars.1 While the annual total of third molar extraction surgeries across Canada is unreported,2 it is estimated that about 1 and 5 million are performed each year in the UK and USA respectively.3-5 Adequate Canadian statistics on third molar impaction and extraction are lacking, but are required to identify and address the needs of our population, particularly those with limited access to oral health care. Depending on how eruption and impaction are defined,6 various estimates of third molar impaction frequency in the general population have been reported, ranging from 22%-66%.7-9 Applying those estimates—even at the low end of the range—to the Canadian population translates to more than 7 million people with impacted third molars, and potentially as many extraction surgeries.

Lack of consensus around prophylactic extraction

But are prophylactic third molar extraction surgeries necessary? The debate around the risks, merits and best practices of third molar extraction extends at least as far back as a National Institutes of Health-sponsored workshop on this topic held in 1979.10  Since 2008, the American Public Health Association has not supported prophylactic surgical extraction of impacted third molars.11 Based on studies tracking the outcomes of impacted third molars, other national health agencies, including those in the UK and Australia, also recommend leaving impacted third molars in place unless they create or become associated with a pathological condition.3,12 Similarly, neither a 2012 Belgian Health Care Knowledge Centre report nor a 1999 Scottish National Clinical Guideline report advocate for prophylactic extractions.13,14 Similar conclusions were reached by a 2010 Swedish health technology assessment.15

In contrast, the American Association of Oral and Maxillofacial Surgeons (AAOMS) considers all third molars—impacted or not—to pose a significant risk. In 1998, the AAOMS commissioned an extensive evidence-based study to systematically quantify the risks and benefits of retaining or extracting impacted third molars.16 To date, peer-reviewed articles derived directly from this extensive study report that even asymptomatic impacted third molars may become associated with periodontal disease17-21 and caries22,23 of the third and/or other permanent molars.

The AAOMS 2011 White Paper on Evidence Based Third Molar Surgery critiques the term prophylactic, which by definition indicates a disease-free state already exists since, according to the AAOMS, all third molars have the potential to become associated with disease that is either present or nascent (but never absent).24 Although the AAOMS White Paper concedes that not all third molars may need to be removed in all patients, the AAOMS online information on wisdom teeth may confuse the issue by stating that “…third molars which have…erupted into the mouth in a normal, upright position may be as prone to disease as those third molars that remain impacted.”25 That is, all third molars are inherently prone to disease and are therefore reasonable candidates for extraction.

There is currently no official Canadian position on third molar extraction. However, in 2010 the federally funded Canadian Agency for Drugs and Technologies in Health (CADTH) published a report on prophylactic third molar extraction through its Health Technology Inquiry Service (now known as the Rapid Response Service).2 The CADTH report concluded that “…there is currently insufficient evidence supporting or refuting the practice of prophylactic removal of asymptomatic third molars” (emphasis added). It bears noting that even though the independent assessments of CADTH as well as those done in Australia, Belgium, Sweden and the UK, evaluated the same research on which the AAOMS based its conclusions in favour of extraction surgery, none of these reports interpreted the evidence as being strong enough to advocate for prophylactic extraction.2,13,15,26

Risks posed by impacted third molars may be exaggerated

The problem with impacted third molars is that they are associated with various pathoses that affect the jawbone, gingiva and adjacent teeth.22, 23, 27 Although a host of factors28 is used to predict third molar impaction, accurate prediction remains difficult.4 Clearly, surgical extraction also carries serious risks, such as permanent damage to bone, nerves, and the jaw joint. Accurately weighing the risks of retention versus removal is at the crux of the decision to extract.

Yet, evidence directly linking third molars to oral diseases is lacking. Further, it is not clear if the age-associated risk of disease23 (i.e., the older the patient, the greater the apparent risk posed by impacted third molars) is simply due to the increased likelihood of bacterial accumulation and tissue inflammation with time. It is also unclear if the position of the third molar at the back of the mouth, which makes it more difficult to clean, contributes to the reported association of asymptomatic impacted third molars with caries.22,23

Keeping the merits and risks in perspective

The pivotal question that oral health care professionals and policy makers must answer is: are the risks of retaining impacted third molars greater than the risks of extraction? Also, in at least some cases where a third molar becomes associated with disease, is it possible to develop nonsurgical therapeutic interventions that treat the pathology and thus bypass the need for extraction?

The AAOMS White Paper cautions repeatedly that retained third molars, impacted or otherwise, require routine observation. Of course, good oral health requires that all teeth be regularly checked, including intraoral radiographic scans. Thus, the burden of monitoring retained impacted third molars is relatively minor, with the exception of patients who are unable or unwilling to access regular dental care. In these cases, specific treatment plans must be developed when possible.

The extraction of problematic impacted third molars is an effective and important option to help maintain good patient health. The concern is that perspective on the merits and risks of third molar extraction versus retention has been muddied by inconclusive scientific evidence. Of note, Health Canada’s most recent reports on oral health omit third molar status altogether.29,30 Strong Canada-based leadership, supported by comprehensive Canadian statistics on third molar impaction and extraction, would help define the status quo of third molar extractions and patient experiences. Only then can Canadian oral health care practitioners and policy makers determine best practices for third molar care in this country.

Acknowledgements: This work was supported by the Natural Sciences and Engineering Research Council (NSERC) of Canada, and the College of Dentistry and College of Medicine at the University of Saskatchewan.