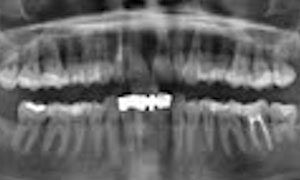 Intrabony oral non-Hodgkin lymphoma (NHL) is rare. We report 2 cases of NHL of the maxilla that initially presented as apical abscesses in endodontically treated teeth. Radiographic findings were nondescript, but tissue biopsy revealed diffuse large B-cell NHL in both instances. No other sites of disease were found. Both patients were treated by chemotherapy and radiation with good results. As primary NHL of the maxilla can mimic a dental inflammatory lesion, tissue biopsy is mandatory in cases where symptoms do not resolve after specific treatment.

Non-Hodgkin lymphoma (NHL) in the oral cavity represents less than 5% of oral malignancies.1 NHL can arise in lymph nodes or extranodal sites. At least 40% of all NHLs occur in extranodal sites, most commonly in the gastrointestinal tract. The second most common extranodal site is the head and neck, predominately in the lymphoid tissue of Waldeyer’s ring.2 This includes the nasopharynx, palatine tonsils, base of tongue and oropharynx. The most common phenotype arising in extranodal sites is the diffuse, large B-cell lymphoma.1

The tonsils are the most common intraoral site, followed by the palate. Primary intrabony sites can present as expansion of the mandible,3 enlargement of the mandibular canal and mental foramen,4 alveolar bone loss and tooth mobility.1 These signs may also be accompanied by swelling, pain, paresthesia of the lip or pathologic fracture.1 However, NHL can mimic other pathologic lesions, presenting clinically as gingival swellings,5,6 periodontal disease,7,8 pericoronitis,9 apical radiolucencies1 or dental abscesses,10 often making the definitive diagnosis challenging.

A 50-year-old Caucasian man presented with an apical abscess on tooth 12, which had been treated by root canal 6 months earlier. On 2 subsequent occasions, the patient had been treated with antibiotics for acute exacerbations. He had also been complaining of numbness and swelling in the anterior maxilla between the right and left cuspid teeth beneath his nose.

Clinical examination of the soft tissues showed no apparent abnormalities. There was no evidence of draining fistulas or swelling related to tooth 12. A periapical radiograph showed a root-canal-treated tooth 12 with no distinct periapical radiolucency (Fig. 1). Panoramic radiography produced nondescript findings (Fig. 2). Under neuroleptanesthesia, the patient underwent a root resection and tooth 12 was retrofilled with intermediate restorative material (IRM) cement.

During the procedure, extensive bony destruction was noted around the apices of all anterior upper teeth from 13 to 23. Multiple specimens of what appeared similar to chronic granulation tissue were sent to pathology. The initial pathology report described an atypical infiltrate consistent with malignant lymphoma. 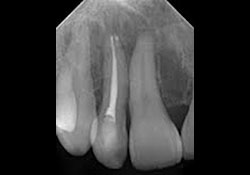 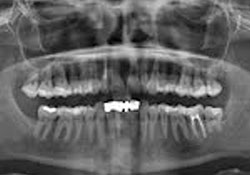 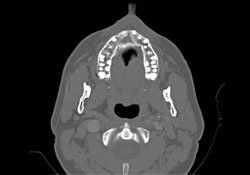 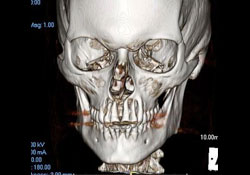 All blood work was normal. Specifically IgG, beta 2 microglobulin and lactic dehydrogenase levels were all within normal range. No further intervention was recommended at this stage, but the patient was monitored at regular intervals by CT scanning. Clinically, the patient continued to feel well after surgery and made a good post-operative recovery.

Repeat CT scans every 4 months continued to show the destructive process involving the maxilla. The patient’s vital signs and blood work were within normal limits, and he was otherwise well.

At the request of the primary oncologist, a repeat biopsy of the lytic lesion in the anterior maxilla was performed under general anesthesia. It was observed that there had been complete bony fill above the apices of all the incisor teeth. However, adjacent to the apices of teeth 12 and 13, there was an area of granulomatous-like tissue measuring 1.5 cm by 1.0 cm, which was excised and submitted to pathology. The pathology report was again positive for diffuse large B-cell NHL. Subsequent investigation, including bone marrow aspiration, did not show any other disease; thus, the patient was determined to be at stage IAE (Table 1) with bone involvement of the maxilla.

He underwent 4 cycles of R-CHOP treatment (rituximab, cyclophosphamide, doxorubicin hydrochloride [hydroxydaunomycin], vincristine sulfate [oncovin] and prednisone). Subsequently, mask measurements were taken and the patient underwent radiotherapy. He responded exceedingly well to his course of adjuvant radiotherapy and continues to progress well 15 months after the initial biopsy.

A 31-year-old Caucasian woman was referred to an endodontist with recurrent swelling in the left anterior maxillary area associated with teeth 22 and 23. These teeth tested nonvital. Necrotic pulp was removed and the teeth were treated with non-surgical endodontic therapy.

The patient returned 2 months later, reporting that the area of concern “never felt right.” No significant findings were noted. She continued to experience recurrent swelling and presented 3 months later with evidence of infection and a draining fistula. She reported that some purulence had drained from the area of tooth 22 and, in fact, she was feeling somewhat better. At that time, adjacent teeth 21 and 24 tested non-vital in response to cold and electric pulp testing, despite being completely virgin teeth.

The patient was then referred to an oral and maxillofacial surgeon for evaluation of the area of concern. Clinical examination revealed a firm, tender swelling of the labial vestibule superior to teeth 22 and 23. Radiographic examination did not show any markedly significant findings or distinct radiolucencies (Fig. 5).

Exploration of the area was carried out under neuroleptanesthesia to permit possible biopsy and root resection and IRM retrofill of teeth 22 and 23. At the time of surgery, significant destruction of the labial cortex over these 2 teeth was noted, with obvious erosion between the roots of the teeth extending to the palatal aspect of the root apices (Fig. 6). Associated with this bony destruction was a firm, granulomatous-like soft tissue mass, which was excised in multiple fragments and submitted to pathology. The preliminary report was of a malignant infiltrate, suspicious for lymphoma. Further consultation and immunophenotypic studies were positive for B-cell lymphoma, diffuse large-cell type.

CT scanning of the head and facial bones and 3D reconstruction of the head were normal, except for a bony destructive lesion of the left anterior maxilla measuring 1.6 cm by 5–6 mm (Figs. 7 and 8). CT scan of the neck, superior mediastinum, both lungs and bony thorax were normal. Baseline blood work and liver enzyme levels were normal. Clinical stage was determined to be IAE (Table 1) diffuse large-cell lymphoma of the maxilla. 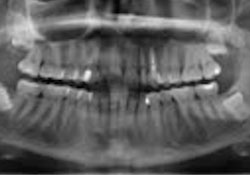 Figure 5: Panorex radiograph shows no significant findings around teeth 22 and 23. 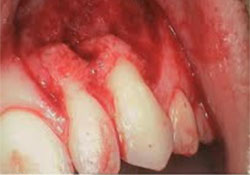 Figure 6: Intraoral photograph showing significant destruction of the labial cortex above the apices of teeth 22 and 23. 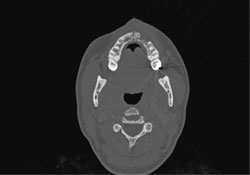 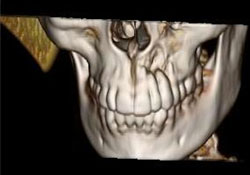 Figure 8: 3D reconstruction showing localized area of bony destruction at the apices of teeth 22 and 23.

The patient was treated with 4 cycles of R-CHOP followed by radiation. She experienced a reaction to rituximab during the first infusion, which was resolved with acetaminophen and diphenhydramine (Benadryl™). She also experienced nausea after the 3rdcycle, which was treated with aprepitant and intravenous hydration. She experienced mild to moderate dysgeusia during recovery from radiation therapy as a result of the use of a stent during the radiation treatments. Overall, she is progressing well 4 months after the initial biopsy.

Diffuse large B-cell lymphoma is the most common NHL, comprising 30%–40% of all cases.11-14 Little is known of the cause of NHL. Differences in incidence among ethnic groups point to a strong genetic influence. Acquired or congenital immunodeficiency is a significant risk factor and may be related to an altered immune response to the Epstein-Barr virus.15,16 Specific chromosomal translocations definitely play a part in the formation of NHLs, causing dysregulation of oncogenes or tumour suppressor genes and allowing unhindered cell proliferation.1

The tumour typically affects middle-aged to older adults: median age of 56 years.14 At the time of diagnosis, 40% of patients are in stage I (single lymph node) or stage II (2 lymph nodes on the same side of the diaphragm) and 40% have extranodal involvement (stage IE or stage IIE) according to the Ann Arbor Staging System for Hodgkin’s lymphoma14 (Table 1). Stage III involves lymph nodes on both sides of the diaphragm, whereas stage IV is characterized as diffuse or disseminated involvement. The designations A and B denote the absence or presence of constitutional symptoms, respectively. Neither patient described above reported any constitutional symptoms, and their tumour sites were extranodal. Staging was therefore IAE.

Note: Each stage may also be assigned an ‘A’ or ‘B’ to indicate the absence or presence of constitutional symptoms (including fever, night sweats and weight loss greater than 10%), respectively.

Diffuse large B-cell lymphomas account for 85% of bone lymphomas of the maxilla and mandible.17,18 In both our cases, the tumour presented in the maxilla and was associated with endodontically treated teeth. There were no distinct apical radiolucencies, and radiographic findings were nondescript. Usually, on radiographic imaging, tumours initially take the shape and form of the host bone and some may be mistaken for a dental abscess.19 The borders are typically faintly defined due to the invasive nature of the neoplasm. The internal structure is usually completely radiolucent, with occasional patches of radiopacity as well as reactive bone formation.19 CT imaging shows characteristic lytic bone destruction, with a localized, “moth-eaten” appearance. Lamellar periosteal new bone formation is often present along with a variable soft tissue mass.18 Widening of the mandibular canal has also been described.4

Biopsy, along with tissue-based immunologic studies, is the only reliable way to make a definitive diagnosis. This tumour consists of sheets of large lymphoid cells with large vesicular nuclei, prominent nucleoli and abundant basophilic cytoplasm.1,14 As the curability of diffuse large B-cell lymphoma depends on the initial chemotherapy protocol, selection of the proper regimen is vital. This is dependent on determination of the stage of the disease (Table 1) and a thorough work-up to identify individual risk factors.

In some patients with indolent lymphomas (Case 1), no initial treatment may be required. Radiation and chemotherapy can be instituted later as necessary. Generally, the prognosis for indolent lymphomas is poor. Even though survival is long, with a mean time interval of 8 years, they are considered incurable.

With aggressive lymphomas (Case 2), 90% of patients receive multiple-agent chemotherapy, and remission is induced in 40% of patients. For those who respond well to chemotherapy, the outlook is good; in some, resolution of the disease occurs after only 1 course of treatment. However, the outlook is poor for non-responders, and the disease is usually fatal within several weeks.1

Dentists should be on the alert for clinical situations that fail to respond to conventional therapy and avoid multiple procedures without the benefit of a biopsy, which delay treatment of what may be an aggressive, neoplastic condition. Primary extranodal NHL can mimic apical abscesses associated with endodontically treated teeth, delaying both diagnosis and initiation of treatment and influencing the prognosis and eventual outcome.