DENTSPLY and CDA Continue To Support Student Research in Canada

Alanna Junaid of the University of Manitoba was the winner of the 2013 program for her ex vivo study of the influence of single-file endodontics on apical transportation in curved root canals. Her first prize is an expense-paid trip by DENTSPLY to the 2013 American Dental Association (ADA) annual meeting in New Orleans, where she will present her research during the ADA’s scientific program.

“Participation in the research program gave me the opportunity to connect with other student researchers from across Canada. It was inspirational and motivating to see the high quality of research being undertaken by every participant. The program is a wonderful way to recognize student clinicians for our hard work and dedication to research at the dental undergraduate level. It was an honour to represent the University of Manitoba at this year’s event,” says Ms. Junaid.

The runner-up in this year’s competition was Hannah Kashyap of McGill University. Ms. Kashyap and her research partner Carly Jade Dool examined the obstacles in delivering mobile dentistry to the underprivileged and designed a model mobile dental unit that alleviates some of these obstacles. “Presenting a research project was a stimulating experience that gave us the opportunity to meet and forge contacts with fellow students, professionals as well as industry. Our exchanges and discussions were invaluable, and I look forward to developing these relationships in the future,” she says. Ms. Kashyap received a $1000 cash award from DENTSPLY for her second-place finish.

DENTSPLY has sponsored the student clinician research program in Canada for more than 40 years. The program’s purpose is “to stimulate ideas, to improve communication and most of all, to increase student involvement in the advancement of the dental profession.”

The student clinicians participating in the event were also honoured by the Canadian section of the Pierre Fauchard Academy (PFA). The students were presented with a scholarship from the PFA, recognizing their special efforts in the advancement of dental education over and above their academic careers. 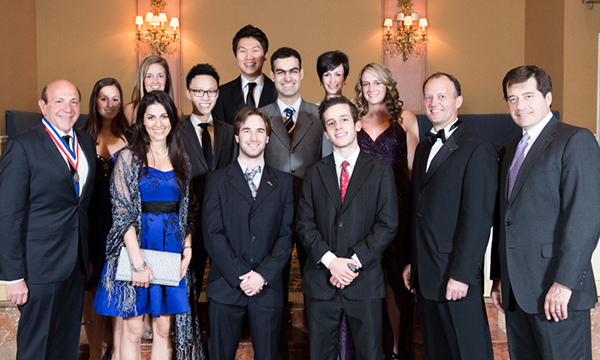 JCDA is pleased to publish condensed versions for the abstracts submitted for the CDA/DENTSPLY 2013 Student Clinician Research Program. To qualify, the study must fall under the “clinical application and techniques” or “basic science and research” categories. Students must identify the purpose of the study, provide background information, outline how the study was conducted and report on the results of the study and its possible significance. The student, selected by his or her own faculty, must be an undergraduate at the time of the presentation, as well as a member of CDA. Nine dental schools participated in this year’s competition.

The abstracts are published in the language of submission.

By: Alanna Junaid, University of Manitoba 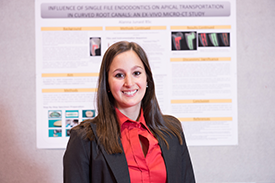 Canal shaping via mechanical instrumentation is considered to be one of the most difficult tasks in root canal therapy. The canal should ideally be enlarged evenly in all directions to ensure complete disinfection and maintenance of the original position, thereby minimizing the risk of blockage, perforation and ledge creation. When the canal is transported from its original position, obturation may also be compromised, resulting in a poor apical seal. This study compares apical transportation in curved root canals when instrumenting with a single WaveOne™ (DENTSPLY Tulsa Dental Specialties,Tulsa, OK) file in reciprocating motions to that incurred when using a sequence of Twisted Files™ (SybronEndo, Orange, CA) in continuous rotating motion.

Forty mesial canals of mandibular molars were evenly allocated into 2 balanced groups taking into account canal length (average 17 mm) and curvature (average 20º). Canals were accessed in a conventional manner and a size 15 K-file was negotiated to working length in the presence of NaOCl. The canals were instrumented according to the manufacturer’s protocol. Pre- and post-instrumentation micro-CT scans were superimposed to assess apical transportation at the 1, 2, 3, 4 and 5 mm sections.

No statistically significant difference (p > 0.05) was found between the WaveOne and Twisted Files groups. The results suggest that a WaveOne file used in reciprocating motion does not increase apical transportation in curved canals when compared to conventional multi-file rotary preparations. Single-file reciprocating motion instrumentation techniques may allow for increased efficiency, reduced operator fatigue and decreased incidence of torsional fractures, without increasing the occurrence of adverse events associated with elevated levels of apical transportation. 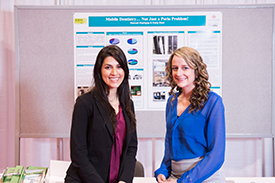 Our goal was to investigate the major obstacles in delivering mobile dentistry to underprivileged communities through a survey of dental outreach program directors in North America, and to design a working model of a novel mobile dental unit to help alleviate some of these obstacles.

We hypothesized that the largest hurdle with delivering mobile dental care is the time and manpower required to assemble and disassemble equipment, due to the unavailability  of a suitable compact and ergonomic dental unit. We developed a survey to further investigate these issues and compared mobile dental programs and units in North America. We then designed a working scale model of an innovative and self-sufficient dental unit. This prototype was designed to facilitate transport and storage.

The largest issue reported in delivering mobile dentistry was cost, as the majority of these programs offer pro bono dental care. We postulated that this cost is not only a result of the unit, but also the expenses related to daily dental materials. Ergonomics was the second largest reported issue with mobile dentistry. This is largely due to the fact that that these dental units lack the capacity to store adequate dental materials used on a daily basis. Finally, assembly and disassembly time of the dental clinics has proved a significant hurdle. We have succeeded in designing a novel, self-sufficient mobile dental unit which houses all the dental materials and equipment required for basic dental care. 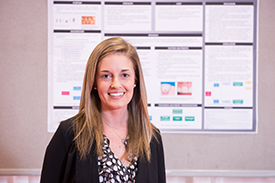 Single unit implant restorations have become increasingly popular among clinicians and patients. Various factors influence abutment selection and lead to decisions concerning the abutment material—whether to select stock or custom abutment, as well as cement or screw-retained abutment. The purpose of this research was to determine what material and type of single unit implant abutment to select when treatment planning an implant case, and to provide guidelines for selecting an abutment.

Creating a gingival margin that mimics the cemento-enamel junction of a natural tooth and achieving the proper emergence profile are challenges in implant dentistry. Depending on the inter-arch distance—being greater or less than 5 mm—a cement-retained crown or screw-retained crown should be selected, respectively. When selecting an implant for the anterior region, it is important to consider the soft tissue, esthetics, cost and strength. Ideally, a custom abutment followed by an all-ceramic or porcelain-fused-to-metal crown is recommended. In the posterior region, stock or custom titanium abutments are indicated due to their simplicity, strength and cost effectiveness. Customized abutments, which are no more costly than stock abutments, can be used to optimize anatomic dimensions and soft tissue contour to achieve the proper angulation and preparation of subgingival margins. 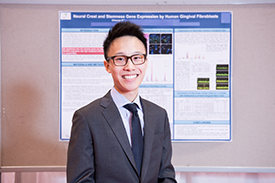 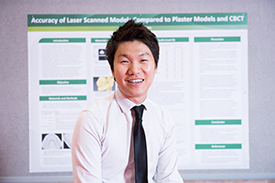 Digital scanners are increasingly being incorporated into orthodontic offices and institutions, primarily in response to the costs and space related to storing and maintaining the physical models. While the cone-beam computed tomography (CBCT) has proved to exhibit accurate measurements, its role in orthodontic settings is limited due to the economic and convenience factors.

The aim of this study was to compare the accuracy of measurements obtained from the 3D laser scans to those taken from the CBCT scans and those obtained from plaster models. Eighteen different measurements—including mesiodistal tooth width, and arch length and width—were selected. CBCT scans and plaster models were prepared from 60 patients. Plaster models were scanned using the Ortho Insight 3D Laser Scanner and the selected measurements were measured using its software. CBCT scans were imported and analyzed using the Avizo® software. The plaster models were measured using a digital caliper. Descriptive statistics and concordance correlation coefficient (CCC) test were then completed. CCC results show that the values obtained by the 3 methods were highly correlated in all measurements at > 0.73. The largest mean difference between values and methods found was 0.59 mm ± 0.38.

By: Joel Meyerson, University of Toronto 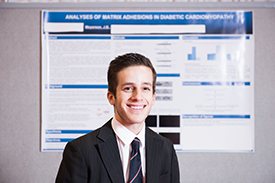 A new method was modified to allow isolation of intact matrix adhesions from human cardiac ventricular fibroblasts that attach to glycated collagen, in order to define their molecular composition. Cells were plated on native or methylglyoxaltreated type I rat-tail collagen for 3 hours, swollen with a hypotonic triethanolamine solution, and detached from collagen substrates by shear force. Isolated adhesion proteins were examined by immunofluorescence and immunoblotting for the focal adhesion proteins vinculin and beta 1, as well as cytosolic protein AkT.

Postoperative complications associated with the retromandibular approach: a retrospective analysis of 118 subcondylar fractures 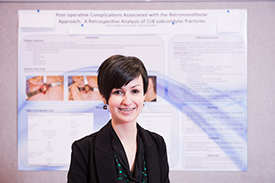 The retromandibular approach offers great visualization and direct access to the condylar process for open reduction and internal fixation. The purpose of this study was to evaluate the rate of complications associated with this approach.

The study sample was obtained from the charts of all patients who presented to the department of oral and maxillofacial surgery for the evaluation and treatment of a condylar process fracture from January 2003 to January 2012. Inclusion criteria were: underwent open reduction and internal fixation (ORIF) of the condylar or subcondylar area; have a complete and available medical chart. Exclusion criteria were: patient treated endoscopically or by other approaches; patient with preoperative facial paralysis. The data collected were: age, gender, mechanism of injury, anatomic location, concomitant facial fractures, follow-up time, antibiotic protocol, and complications.

The retromandibular approach is a safe method for the treatment of condylar process fractures and complications are rare. Permanent damage to cranial nerve VII is extremely rare, but temporary facial paresis is not uncommon.

By: Shayan Sadeghi, University of Montreal 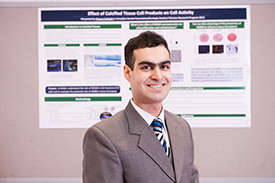 Cells that form calcified tissues secrete various non-collagenous proteins (NCPs) that play critical roles in regulating cell activities and mineral formation. ODAM and AMBN are two examples of NCPs that are also ameloblast products. ODAM is expressed in ameloblasts during enamel formation as well as in the junctional epithelium (JE), and is found pathologically in some epithelial cancers. The exact functionality of this protein and its effect on cell activity is still largely unknown. AMBN plays a major role in enamel formation, and recent studies suggest it may also be implicated in bone formation. The goal of this study was to better understand the role of ODAM in the function of JE cells and to evaluate the potential role of AMBN in bone formation.

Our study shows that the overexpression of ODAM has an effect on cell shape and cell division, and that the effects of ODAM may be cell-type dependent. We also found that the overexpression of AMBN did not enhance the degree of mineralization, suggesting that AMBN may not have a physiological role in bone formation. This does not however exclude a potential pharmacological use. A better understanding of the roles of ODAM and AMBN in physiology and pathology may offer insight into the development of novel therapeutics. 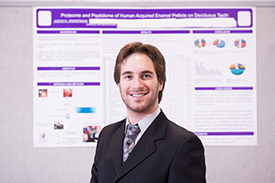 Understanding the composition and structure of the acquired enamel pellicle (AEP) has been a major goal in oral biology. Exhaustive exploration has provided a comprehensive identification of more than 100 proteins from AEP formed on permanent enamel.

Pellicle material was collected from 10 children and subjected to mass spectrometry analysis. A total of 76 pellicle proteins were identified from the deciduous pellicle proteome, and 38 natural occurring AEP peptides were identified from 10 proteins. The deciduous and permanent AEP did not share the majority of their proteins, suggesting that primary AEP proteome/peptidome presents different trends than those observed in the permanent AEP proteome/peptidome, and emphasizing the importance of studying the physiologic conditions of the AEP on different enamel substrates. Due to different AEP compositions between primary and permanent teeth, clinically the mechanism behind the initiation of oral pathologies related to this protein film could be different. This is the first study to provide a comprehensive investigation of in vivo AEP formed on deciduous enamel.