Disparities in the Availability of Dental Care in Metropolitan Toronto 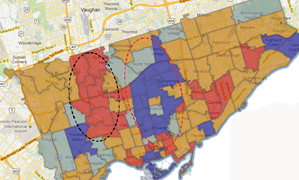 Objectives: The availability of dentists as a barrier to access to care has not been thoroughly explored, particularly in large cities. In this study, we aimed to identify disparities in the availability of dentists in Canada’s largest urban centre, Toronto, and explore whether distributional disparities are associated with underlying factors, such as affordability as measured by average household income.

Conclusions: Dentist availability may be linked to demographic factors, including affordability. The income-based disparity in availability in Toronto was as high as that observed elsewhere between rural and urban communities.

A patient’s ability and decision to access dental care are influenced by such factors as income, insurance and education.1-3 These important predictors are part of 3 overarching barriers to accessing care: affordability, acceptability and availability.4,5 Affordability and acceptability relate to financial (e.g., access to dental insurance) and cultural (e.g., a patient’s willingness to receive dental care) factors. Availability depends on the number of local service points (such as clinics or dentists) that a patient can choose from.4 Thus, availability represents the relation between geographic distribution of services and access to care.

Studies on the availability of dental care show a common contrast between urban and rural populations in terms of the distribution of dentists.6,7 Using geographic information systems (GIS) to pinpoint the location and number of dentists, researchers have also shown that a large majority of dentists practise in metropolitan as opposed to rural areas.8-10 Additional analyses have often revealed associations between the distribution of dentists and various socioeconomic characteristics, such as the income of people within a community.10-12

Community boundaries in metropolitan Toronto were defined based on forward sortation areas (FSAs). An FSA represents a geographic region in which all postal codes start with the same 3 characters. Of the 102 Toronto FSAs, complete data for 96 were available and used. These represent a sizable population (26,075 people on average) that could readily be served by more than 1 dentist. The 6 excluded FSAs have populations of fewer than 15 people, and census data for them are not provided by Statistics Canada.13 Demographic data by FSA were obtained from the last available complete census as of March 2012, i.e., the 2006 census.14 A geospatial boundary data file defining FSA boundaries (such as latitudes and longitudes) was also used for mapping.15

Geocoded data on number of dentists in each Toronto FSA in 2012, determined through their practice addresses, were obtained from the Ontario Dental Association. Dentists with multiple practice locations were included in all FSAs in which they were practising. Therefore, our total dentist estimate (2,730, including both general practitioners and specialists) was greater than the actual number of dentists practising in Toronto (2,560). Because FSA populations varied, the number of dentists per 100,000 population was computed for each FSA. These standardized ratios were then used for mapping and data analysis.

To determine whether differences in the dentist-to-population ratio across income groups were significant, negative binomial regression was carried out. This technique is used specifically for modeling count data such as ours (i.e., dentists per FSA), with number of dentists as the dependent variable and FSA population as the offset variable. Thus, the number of dentists was controlled for FSA population size, such that the model output could be interpreted as the ratio of dentists to population across FSAs.

An income group value (ranging from 0 to 3, with 0 the lowest and 3 the highest income range) was assigned to each FSA based on its average household income, and this served as the independent variable. Using the lowest-income group as a reference, the model tested whether differences in the average dentist-to-population ratio between the reference group and the remaining 3 income groups were significant. This model has been used before in studies on distributional inequities.10 It is preferred over a simple linear regression model as the count data modeled do not follow a normal distribution. Furthermore, it has been used in place of Poisson distribution to account for over-dispersion (unequal mean and variance) in the dependent variable. 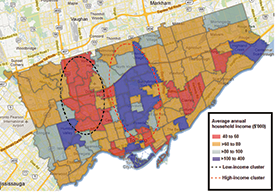 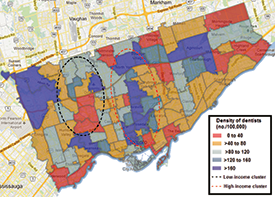 Figure 2: Distribution of dentists (no. per 100,000 population) across forward sortation areas in metropolitan Toronto. The locations of the high and low average annual household income clusters identified in Fig. 1 are shown for reference.

Some geographic clustering of dentists is also observable (Fig. 2). In about 33% of the FSAs (32/96), the number of dentists per 100,000 population is high or very high (≥ 120). Most of them (75% or 24/32 FSAs) are situated in central Toronto within the same area as the high-income cluster shown in Figure 1. In contrast, half of the communities in the low-income cluster have low or very low dentist density with the remaining belonging to the middle ratio category. 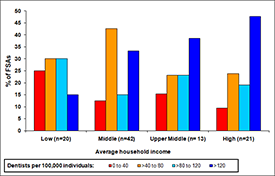 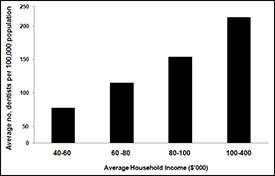 Figure 4: Relation between density of dentists and household income in our study population.

Graphing average number of dentists per 100,000 population for each income group shows an increase from 77.9 for the lowest income group to 192.3 for the highest (Fig. 4) — a 2.47-fold increase. In other words, a dentist is 2.47 times more likely to be practising in a high-income area than a low-income one (p < 0.05). Furthermore, as the difference in income between the lowest-income reference region and comparison regions decreases, so does the likelihood of a dentist practising in the higher income region (Table 1).

* The dependent variable is the number of dentists per FSA; the offset variable is the population per FSA.
† IRR = incidence rate ratio (compared with $40,000–$60,000 average annual income group).

Using Pearson correlation analysis (Table 2), we explored potential associations between income, education and immigrant status of each community and its supply of dentists. Dentist supply was positively correlated with average annual household income (p < 0.01) and the percentage of residents with a high school or university education (p < 0.01). A negative correlation between dentist supply and both percentage of households with income below $20,000 and percentage of immigrants was observed (p < 0.05). There was no significant association between population density and dentist supply.

The results indicate an uneven distribution of dentists across metropolitan Toronto based on average annual household income, education and immigrant status. Moving from the lowest- to highest-income cluster, an observable increase in the number of regions with high dentist-to-population ratios (i.e., FSAs with ≥ 120 dentists per 100,000 or less than approximately 833 individuals per dentist) is seen. This disparity is reinforced by our finding that there are 2.47 times as many dentists per 100,000 population in the highest income areas than the lowest. This confirms our hypothesis that areas with higher affordability are associated with a higher availability of dentists.

This study has a number of strengths, but some limitations. It is the first study of a Canadian population that looks at geographic distribution of dentists, via GIS-based techniques, in relation to underlying community characteristics. Our finding of lower levels of dentist availability outside central regions could be an important barrier to accessing dental care, especially in cities already suffering from a low supply of dentists. Furthermore, the income-based disparity in our study population (2.47 times as many dentists per 100,000 population, on average, in the highest- vs. lowest-income group) is greater than that observed in the literature between urban and rural populations. Most studies at a state or region level in the United States show that urban populations have 1–2 times as many dentists per 100,000 as rural populations.8,17-19

The income effect on distribution could, therefore, be important in identifying areas for implementation of programs and policies to relieve access to care problems, i.e., focusing not only on rural but also on other low-income communities. A higher density of dentists has also been shown to mitigate the disparity in use of dental care between high- and low-income groups.20 Therefore, focusing on increasing dentist density in low-income areas could help induce higher demand and use of dental services in those areas.21

In addition to being able to pinpoint communities suffering from inequities, the methods presented here also allow policymakers to follow communities over time to see how distribution patterns change. This would permit the prediction and projection of dentist supply to prepare for future shortages.10 Other initiatives, such as planning of setup locations for voluntary dental clinics or identification of underserved regions for recruitment of dental students, may also help alleviate access to care problems in low-income and rural communities.22

Some limitations in this study arise from assumptions made in estimating dentist availability. First, our assumption that dentists who practise in multiple FSAs are available full-time at all of their practice locations leads to an overestimate of dentist availability in some FSAs. Ideally, this error could have been mitigated by calculating the total number of full-time equivalent dentists by combining time spent in each practice location.19 However, data at this level of detail were unavailable to us. Second, we also assumed that people visit a dentist within their FSA. As a result, total population for a given FSA does not account for those who visit dentists in FSAs other than the one in which they reside. Hence, the actual density of dentists across areas may vary from our estimates. Finally, because metropolitan Toronto comprises entirely urban communities, this study did not focus on an urban–rural gap but only on potential disparity across income groups.

We found significant correlations between various demographic characteristics and the supply of dentists in metropolitan Toronto, and it would be interesting to explore the independent impact of each of these factors on the supply of dentists. We also plan to use similar GIS techniques to explore the relation between dentist availability and demographic characteristics of rural Ontario as well as other major urban and rural centres in Canada. We envision that findings from such studies will help inform policies that address low access to care issues across Canada.

Acknowledgments: The authors declare no conflicts of interest and would like to thank the Ontario Dental Association for providing recent data on dentist numbers in Toronto.