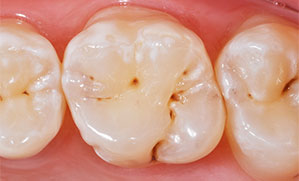 Silorane-based composite resin requires a specific adhesive system: a 2-step self-etching adhesive. Clinical protocols are well established and are based on the principles of adhesion to mineralized dental tissues. In this paper, we present a clinical application of the silorane adhesive system in a class-II restoration using silorane-based composite resin.

Silorane consists of 2 molecules: siloxane, which makes the material hydrophobic, and oxirane, which allows polymerization. According to the manufacturer, the polymerization mechanism results in less than 1% shrinkage. This reduces polymerization stress and, hence, the incidence of microleakage, secondary caries, postoperative sensitivity and enamel fractures.1-3 The physical, biological and mechanical properties of silorane-based resin are clinically acceptable and the performance of this resin is similar4-9 or superior10-15 to that of methacrylate-based resins.

This low-shrinkage material was specifically designed for restoring posterior teeth. It cannot be used with conventional adhesive systems, designed for methacrylate-based resin.16,17 Instead, it is used with its own system, the silorane system adhesive (SSA), a 2-step, self-etching procedure that requires the application of 2 solutions: a primer and a bonding agent.

The primer consists of acidic monomers that etch the dental substrate and promote mechanical bonding. They also enable chemical bonding with available hydroxyapatite.18,19 The primer includes bisphenol A glycidyl methacrylate (BisGMA) and hydroxyethyl methacrylate (HEMA) monomers, organic solvents (water and ethanol) and a camphorquinone photo-initiator system. Thus, it is necessary to polymerize the primer layer, and this makes it similar to a 1-step, self-etching adhesive system, as bonding with the dental structure is established during this first application.17 The bonding agent is a viscous adhesive that contains a hydrophobic, bifunctional methacrylate-based monomer compatible with the hydrophobic silorane.10

In this paper, we briefly review the clinical application of the SSA and present a case report to illustrate the restoration of a class-II cavity using the Filtek P90 (3M ESPE, St. Paul, MN, USA) restorative system.

A 15-year-old patient presented for treatment, complaining of tooth sensitivity in the right upper posterior region. Clinical examination revealed a dark aspect on the mesial and occlusal surfaces of the maxillary right first molar, tooth 16 (Fig. 1). A bite-wing radiograph showed a proximal carious lesion on the mesial surface of tooth 16. The proposed treatment was a class-II restoration using a silorane-based composite resin, Filtek P90. The patient’s accompanying parent agreed to this treatment and signed a consent form. The patient received instructions regarding oral hygiene and diet.

Treatment began with prophylaxis in the region of the tooth to be restored and selection of tooth colour. Occlusal contacts were checked, and infiltration anesthesia and rubber dam isolation were performed. Occlusal enamel in the area close to the mesial marginal ridge was removed using a 330 pear-shaped carbide bur in a high-speed handpiece. Carious dentin was removed along the entire depth of the cavity using a small round carbide bur in a low-speed contra-angle handpiece. The adjacent tooth was protected with a metal strip and a wooden wedge (Fig. 2), the remaining enamel marginal ridge was fractured with a dentin curette and caries removal was completed.

Restoration of occlusoproximal preparations is easier when adequate matrices are selected.20 In this case, the Composi-Tight 3D system (Garrison Dental Solutions, Spring Lake, MI, USA) was used, as it has the advantage of restoring adequate proximal contour and providing appropriate interproximal contact. A pre-curved strip was selected, adapted to the proximal box with a plastic wedge (Fig. 3) and a metal ring was placed over the wedge. 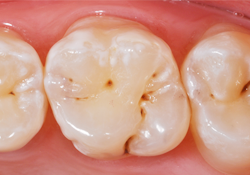 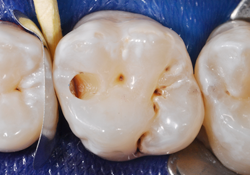 Figure 2: Protection of adjacent tooth with a metal strip and wooden wedge. 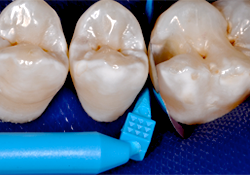 Figure 3: Plastic wedge positioned to adapt the matrix to the walls of the proximal box.

Enamel etching was carried out by applying 37% phosphoric acid (Gel Scotchbond etchant, 3M ESPE) for 15 s (Fig. 4a).21,22  Silorane self-etching primer (P90 Self-Etch Primer, 3M ESPE) was then applied to the dentin using a disposable brush (Microbrush, Vigodent, Rio de Janeiro, Brazil) by rubbing for 15 s, then using a gentle air stream to evaporate the solvent (Fig. 4b) followed by photoactivation for 10 s, according to the manufacturer’s instructions. The bonding agent (P90 Self-Etch Bond, 3M ESPE) was applied to the cavity with a disposable brush, and a gentle air stream was used to spread the material into a uniform layer (Fig. 4c). The bond layer was cured for 10 s, according to the manufacturer’s instructions. Photoactivation of the adhesive system and composite was performed using an LED (Translux Blue, Heraeus Kulzer, South Bend, Ind.) at an intensity of 876 mW/cm2. 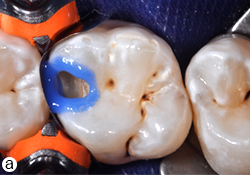 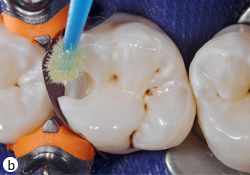 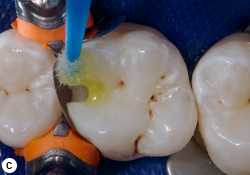 Figure 4: a) The enamel was etched with 37% phosphoric acid for 15 s.; b) self-etching primer was applied with a disposable brush; c) bonding agent was then applied over the entire cavity.

Silorane-based composite resin (A2 Filtek P90, 3M ESPE) was applied in 3 increments. The first was used to reconstruct the mesial wall and improve the proximal contact; it was cured for 20 s (Fig. 5a). The second was applied horizontally at the bottom of the entire cavity and adapted to the walls using a condenser (Fig. 5b); it was also cured for 20 s. The third was inserted, adapted to the cavity with a condenser and distributed between the cusps and marginal ridge using a spatula. Occlusal anatomy was reproduced using a fine anti-adherent spatula and composite brushes (Hot Spot Design, Curitiba, Paraná, Brazil) and final photoactivation was carried out for 40 s (Fig. 5c). 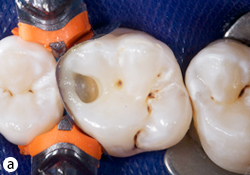 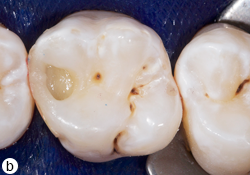 Figure 5: a) The first application of silorane-based composite resin was used to reconstruct the mesial wall. ; b) the second increment filled the entire bottom of the cavity; c) after application of the third increment, the final occlusal anatomy was checked and no adjustments were necessary.

The occlusion was checked and no adjustments were necessary. Finishing and polishing were carried out using sandpaper strips on the proximal surface, flexible extra-thin sequential disks at the marginal ridge (Sof-Lex XT, 3M ESPE), extra-fine-grained diamond burs in a high-speed handpiece and sequential rubber tips (DFL Rubber tips, DFL, Rio de Janeiro, Brazil) on the occlusal surface. The final gloss was obtained with a brush containing abrasive SiC particles (Astrobrush, Ivoclar Vivadent, Schaan, Lichtenstein) (Fig. 6). With polymerization shrinkage less than 1%, the finishing and polishing procedure could be performed at the same clinical session, as the minor heating produced by rotatory instruments does little damage to the marginal seal. 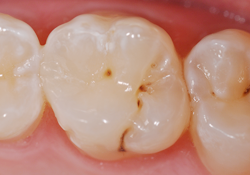 When a low-shrinkage composite resin is used in restorative procedures, cavity configuration and insertion technique are thought to be less critical. However, incremental application of the resin has been shown to improve its adaptation to the cavity walls considerably and allow effective photopolimerization at the resin–tooth interface.5,23 This technique also reduces the formation of internal cracks and increases microhardness,24 increases bond strength10,18 and reduces cuspal deflection.24 Despite less shrinkage, silorane-based composite resin may increase stress at the resin–tooth interface because of its structural stiffness25,26 and, therefore, not necessarily reduce shrinkage stress. Thus, a layering technique is recommended.10,18,24 In the case described above, the composite resin was inserted into the cavity in 3 increments no thicker than 2.5 mm and carefully adapted to the cavity preparation.

The high content of HEMA and water in the SSA self-etching primer makes it more hydrophilic, increasing the susceptibility of the hybrid layer to water absorption and, consequently, reducing durability of the adhesion.27 Papadogiannis and colleagues28 found HEMA-containing adhesives to be most prone to water effects, resulting in a decline in mechanical properties. However, the application of a second hydrophobic layer (the SSA bonding agent), which does not contain HEMA, decreases this permeability and improves bonding stability.29 In addition, despite the need for a dedicated adhesive system for silorane composite resin, it has also been reported that choosing products from the same manufacturer will favour chemical interaction between silorane composite and methacrylate-based adhesives.30

Because the SSA self-etching primer is mildly acidic (pH = 2.7), it causes demineralization of the superficial dentin, incorporates the smear layer and chemically binds with calcium in hydroxyapatite.19 In laboratory studies, the strength of SSA–dentin bonding proved satisfactory, although nanoleakage was not fully eliminated.16,17 On the other hand, Adebayo and others31 found that the bond strength of silorane-based composites was lower than that of methacrylate-based composites. Another laboratory study reported a modification of the SSA protocol that improved the strength of its microtensile bond to dentin.32 The protocol improvement consisted of enamel etching for 15 s and agitation of the primer applied to moist dentin.

A disadvantage of self-etching adhesive systems is their low efficiency in terms of enamel adhesion compared with total-etching systems. This characteristic is most evident with intact enamel and additional enamel conditioning with phosphoric acid is recommended.21,22 The presence of irregularities in prepared enamel improves adhesion and reduces the need for additional etching.17,22 However, during clinical procedures, it is difficult to distinguish which part of the enamel has been instrumented. In our case report, etching was performed across the cavosurface enamel and slightly beyond the preparation margins to ensure effective adhesive bonding and prevent early microleakage.

The low-shrinkage silorane-based composite resin produces good results in laboratory and clinical studies. A layering technique is recommended to ensure best results. The SSA is less sensitive to variations in technique, but information about its performance when bonded to enamel is still scarce.9 Based on current evidence and when used appropriately, the Filtek P90 restorative system is a favourable treatment option for direct restorations in posterior teeth.