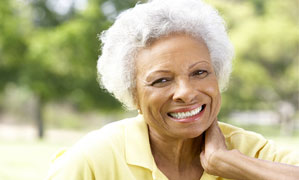 Background: The incidence of dental caries has declined significantly among children, likely because of the widespread use of fluoride toothpaste. However, the effect of using fluoride toothpaste has not recently been investigated among older adults.

Objective: To evaluate the incidence and reversal of caries on coronal and root surfaces in a sample of caries-susceptible, community-dwelling older adults who were using fluoride toothpaste and to examine associations with risk factors for caries.

Methods: Community-dwelling adults 65 years of age or older with more than half (> 14) of their natural teeth were eligible for this study. Coronal and root surfaces were scored with the International Caries Detection and Assessment System (ICDAS) at baseline and at 6, 12, 18 and 24 months. Participants were instructed to brush their teeth twice daily for 2 minutes using fluoride toothpaste. Percent incidence and progression or reversal of carious surfaces was measured (in relation to number of surfaces per participant), and relationships with diet, age, sex, medications and systemic conditions were determined.

The Canadian population is aging, with the proportion of seniors expected to double by the year 20251 and the majority of older adults continuing to live independently within the community. Rates of edentulism have declined in North America,2 and an increasing proportion of elderly people retain some or all of their natural teeth. However, the teeth and dental prostheses of older adults are prone to oral disease, which creates a need for maintenance and possibly replacement.3 The prevalence of caries has decreased markedly among both children and adults, whereas the prevalence of caries among older adults aged 70 years and older remains high.4Older adults are at greater risk for dental caries than younger adults because of age-related salivary changes, poor diet and exposure of root surfaces through gingival recession.

The aim of this study was to document the incidence of caries and rates of caries reversal on coronal and root surfaces in relation to caries risk factors among community-dwelling older adults using fluoride toothpaste.

A convenience sample of 100 adults 65 years of age or older living independently in the community and having tooth surfaces at risk for development of carious lesions was identified for this 2-year follow-up study. Eligible participants had more than half of their natural teeth (> 14 teeth, excluding third molars), were susceptible to caries (with between 1 and 6 root caries lesions) and had no contraindications to a dental examination or use of fluoride toothpaste.

Attendees at presentations at 14 community centres in Vancouver and its suburbs were invited to participate in the study. Potential participants underwent an oral examination, and the first 100 satisfying the selection criteria were enrolled in the study. All clinical examinations were performed in a dental operatory at the University of British Columbia faculty of dentistry dental clinic or at community centres (using a portable dental light, portable chair and a compressor for air–water syringe and suction). Those who agreed to participate in the study were reimbursed for their travel expenses up to $25 per appointment (screening, baseline examination, and 6-month, 1-year, 18-month and 2-year examinations).

A dental assistant facilitated the collection of all consent forms and all medical, dental and dietary histories. This person also questioned participants as to what treatment they had received for caries during the study, with the dentist examiner subsequently verifying this treatment information. Although complete medical histories were taken, only the number of medical conditions and the number of prescription medications were used in the current analysis. The Compendium of Pharmaceuticals and Specialties23 was used to identify medications with potential xerostomic effects. Participants were questioned about their typical dietary intake, and the daily frequency of sugar intake was calculated. The dental assistant provided a 15-minute educational program concerning daily mouth care for each participant at baseline and at each subsequent examination. Participants were asked to brush their teeth twice daily (after breakfast and before bed) for 2 minutes using fluoride toothpaste (a smear or 1 g of toothpaste on the bristles of a standard soft-bristled toothbrush [supplied]). Participants were asked to refrain from using any other fluoride-containing products, such as mouth rinses, but otherwise were to follow their usual daily mouth care practices. Each participant was given a daily mouth care reminder card, with written instructions and supporting images, along with a logbook for recording compliance. Participants were also given a 3-month supply of toothpaste at the start of the study. The dental assistant called each participant at 3 months to check compliance with the study regimen. Those complying with use of the fluoride toothpaste had their toothpaste replenished at 3-month intervals for the complete study period, and those who were noncompliant were dismissed from the study.

At baseline, 6 months, 1 year, 18 months and 2 years, the dentist re-examined each participant and scored all tooth surfaces for caries with the International Caries Detection and Assessment System (ICDAS).24 This 6-point caries-scoring system has 4 categories for progressive noncavitated caries and 2 categories for cavitated caries (Table 1), along with categories for sound and restored teeth, which allows for more refined monitoring of caries, especially over the short term. Participants were informed of the presence of any carious lesions, in which case treatment recommendations were provided.

The same experienced dentist examined each participant at baseline (0 months) and every 6 months over the 2-year study. Before every examination, each participant underwent a dental cleaning (rubber cap prophylaxis with pumice) by a dental assistant for removal of soft deposits, to facilitate scoring of all exposed coronal and root surfaces. The dentist examiner was calibrated with the principal investigator (C.C.L.W.) on measuring root and coronal caries using the ICDAS. Calibration involved performance of surface-level assessments on each tooth, after which any discrepancies in scoring were re-examined and discussed to reach consensus.

Each tooth was deemed to consist of 5 coronal surfaces (including the incisal surface) and 4 root surfaces. The examiner used a visual–tactile approach, with mouth mirrors, a no. 5 dental explorer and 2.7× magnification, to diagnose coronal and root caries. This process involved assessment of surface texture (hard, leathery or soft) and determination of the presence and degree of cavitation.25 The examiner's reliability was determined by comparing 2 sets of recordings a week apart for 29 randomly selected individuals within the study. To correct for differences among participants in numbers of teeth and exposed root surfaces, the data were analyzed in terms of percent incidence of reversal (or development) of carious lesions on noncavitated and cavitated surfaces.

To better understand variation in caries among participants, bivariate and multivariate analyses were employed. Because the distribution of specific risk factors was not normally distributed, a nonparametric bivariate statistic was applied.

SPSS version 20.0 software (IBM, Armonk, NY) was used for all analyses. Univariate descriptive statistics were used to assess patterns of caries progression or reversal on coronal and root surfaces. For the inferential bivariate and multivariate statistics, a number of known risk factors for caries, such as frequency of sugar consumption, presence of systemic diseases, use of medication, sex and age, were considered. The joint effect of risk factors for coronal and root caries was examined by means of multiple linear regression models. One of the assumptions in regression modelling is the requirement for independence among the included predictors, and violation of this assumption may lead to inflated values of regression coefficients. To test for independence among the included predictors, collinearity diagnostics were employed. The level of statistical significance for all tests was set at p < 0.05.

The study was approved by the Clinical Research Ethics Board, University of British Columbia (H06-03529).

The community centre presentations were attended by a total of 524 older adults. Of these, 418 underwent an oral examination, and the first 100 satisfying the selection criteria were registered into the study. A total of 67 participants (age range 65–86 years at baseline) completed the 2-year study, of whom 41 (61%) were men and 26 (39%) were women. Of the participants who did not complete the study, 14 had no reason for drop-out, 10 were lost to follow-up, 4 did not like the fluoride toothpaste supplied (noncompliant), 2 underwent complete extractions and were fitted with dentures, 2 died, and 1 was in poor health. Although all participants were advised to see their own dentist for treatment of carious lesions detected, only 8 underwent such treatment during the study, with a total of 12 teeth receiving direct dental restorations.

Table 2: Change in caries for coronal and root surfaces among 67 participants over 2-year follow-up period 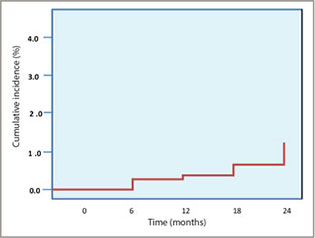 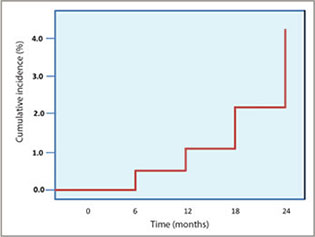 Bivariate and multivariate analyses showed that only the number of systemic medical conditions was associated with development of carious lesions (Table 3). Two linear multiple regression models, one for caries risk on coronal surfaces and the other for caries risk on root surfaces, were employed to assess risk factors of medication use, frequency of sugar intake, number of systemic conditions and age (Table 4). Collinearity diagnostics showed no violation of the assumption of independence among these risk factors (all tolerance values > 0.7; variance inflation factor for all independent predictors combined < 30), and all regression coefficients were therefore considered valid. The multiple linear regression models explained about 16% of the variation in caries incidence (R2 = 0.157). Increased age was associated with higher incidence of root carious lesions. 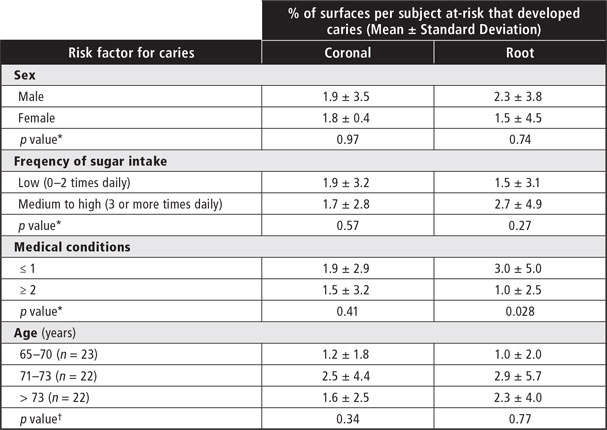 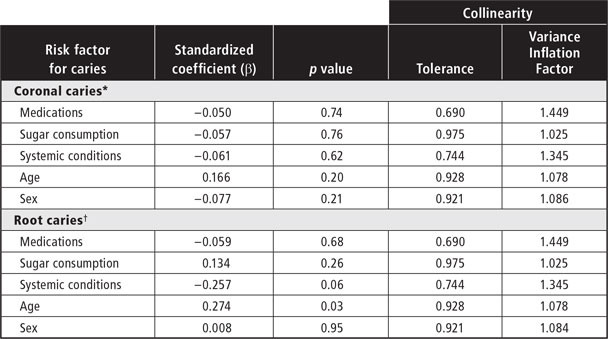 In this study of community-dwelling older adults using fluoride toothpaste, rates of both progression and reversal of carious lesions were low, as has been reported in other studies.22,26,27

In this study, the mean annual caries incidence was less than 1%, similar to previously reported rates for independent-living elderly people.12-19 However, it is important to consider the presence of inter-individual variation as it relates to caries progression or reversal, whereby some participants experienced no caries at all, with others having 20% of surfaces at risk for caries. Variation in caries progression was greater on root surfaces than on coronal surfaces.

No significant risk factors were identified for progression of coronal caries; however, progression of root caries was correlated with age and number of medical conditions. Given that caries progression has been consistently related to previous caries experience,15,16,28,29 a higher rate of caries incidence was expected in this sample of older adults. It has been reported that changes in oral health experienced by elderly people are not the result of age itself, but rather are the consequences of systemic disease, use of medications with xerostomic potential, functional disabilities and cognitive impairment.7,16,18,26,30

The small convenience sample used for this study limited its generalizability, but the study does provide valuable information for community-dwelling older adults with identifiable risk for caries. Using a larger sample size or a longer follow-up period for reassessment (or both) would increase the possibility of identifying significant determinants of caries risk.

Minimal rates of progression or reversal of carious lesions were observed among at-risk community-dwelling older adults who were exposed twice daily to fluoride toothpaste. The incidence of root caries was correlated with age and number of concurrent medical conditions.

Acknowledgement: Approved by the Clinical Research Ethics Board, the University of British Columbia, Canada (H06-03529).