The Importance of the Initial Comprehensive Dental Examination 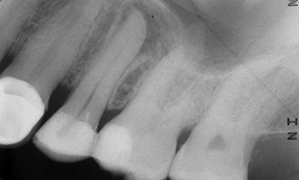 New diagnostic technology that improves patient care is becoming more common in dental practices at both the generalist and specialist levels. However, new diagnostic tests may be ordered prematurely or given more importance than warranted, resulting in misdiagnoses or delay of appropriate treatment. In this report, we describe a case in which several oral health care professionals failed to diagnose persistent facial pain correctly, in part because of failure to conduct a comprehensive dental examination and over-reliance on new technology. During 13 months of persistent mandibular pain, various diagnoses and treatments, the patient did not have a comprehensive dental examination—an examination that would have revealed periradicular periodontitis in tooth 25 causing the referred mandibular pain. This case demonstrates the importance and value of the initial comprehensive history and clinical examination, followed by conventional imaging to arrive at an accurate diagnosis and treatment plan.

New diagnostic technology aimed at improving patient care is becoming more common in dental practices at both the generalist and specialist levels. Instruments marketed to diagnose dental caries, assess periodontal therapies and detect early oral cancer are now becoming commonplace. The exponential growth in the use of digital imaging has resulted in the development of cone beam computed tomography (CT) as an in-office procedure. These new diagnostic tools could define a new standard of care that may be expected by our patients.1

However, many of these new diagnostic tests may be ordered prematurely or given more importance than is their due, and this could result in misdiagnoses or delay appropriate treatment. Oral health professionals must be reminded of the importance and significance of the initial comprehensive dental examination that includes both a detailed history and a clinical examination before any diagnostic tests or interventions are prescribed or performed. Excellence in comprehensive dental care and treatment planning begins with a thorough assessment of the patient.2,3 In the following report, we describe a case in which several oral health care professionals failed to diagnose persistent facial pain, in part because of an over-reliance on new diagnostic technology.

The patient, a 44-year-old healthy woman with no known drug allergies, presented to the emergency department at Mount Sinai Hospital with the chief complaint of persistent left mandibular pain that began over a year earlier. During the previous 13 months, the patient had sought investigation and management of her symptoms from a general dentist, an endodontist, an oral and maxillofacial surgeon and an oral and maxillofacial radiologist without any improvement or resolution of her symptoms or a definitive diagnosis.

In January 2011, she had visited her general dentist, from whom she received routine dental care, complaining of pain in the posterior left mandible. Her dentist had advised her that the persistent pain was most likely arising from her mandibular left first molar (tooth 36), which showed radiographic evidence of periapical rarifying osteitis. Non-surgical root canal treatment had been recommended and completed by the dentist; however, this had not relieved the pain.

Because of persistent and intensifying pain over the next 6 months, the patient had been referred to an endodontist who had diagnosed chronic periradicular periodontitis of tooth 36. The endodontist had reported that 4 files had been broken within the tooth, and an open margin on the distal aspect of the tooth at the level of the alveolar process was present. Treatment options that had been discussed with the patient included surgical and non-surgical retreatment of the root canal-treated tooth 36 or extraction. The patient had decided to have the tooth extracted as the pain was becoming unbearable.

The following month, an oral and maxillofacial surgeon had extracted tooth 36 without any complications. Unfortunately, the pain had persisted without any significant reduction in symptoms. A month later, the patient had returned to the oral and maxillofacial surgeon very upset due to her continued discomfort. She had then been referred to her local hospital for additional diagnostic tests, including a nuclear medicine bone scan, a medical CT scan and routine blood work to rule out the possible diagnosis of osteomyelitis of the left mandible. As well, an oral and maxillofacial radiologist had carried out a limited field-of-view cone beam CT of the left posterior mandible, which had  shown all hard and soft tissues to be within the range of normal (Fig. 1). In the accompanying report, the radiologist had commented that the socket of tooth 36 was healing normally with reparative bone formation present at the periphery of the socket. At this time, the putative diagnosis of osteomyelitis as a source of the patient’s pain had been ruled out. The patient had then been informed that, in rare situations where persistent pain is experienced in a specific tooth or region after a tooth is endodontically treated or extracted, a neuralgia or atypical facial pain could develop. The radiologist’s report had further stated that it was unlikely that further dental treatment would have any effect on her symptoms in this region. 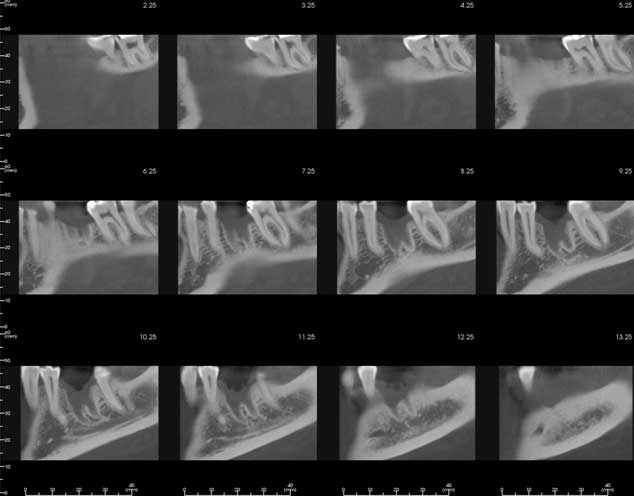 Figure 1: Cone beam computed tomography images obtained by an oral and maxillofacial radiologist and reported as demonstrating normal healing in the region of tooth 36.

When the patient presented to Mount Sinai Hospital’s emergency department shortly thereafter, her chief complaint was that she had constant, persistent pain in the left mandible for the past year. The pain was described as sharp in character; it appeared to emanate from the extraction site of tooth 36 and radiate posteriorly along the left mandible toward her ear. She also described the pain as nocturnal in nature. According to the patient, extremes in food temperature and sweets triggered acute exacerbations of her pain, and the only form of transient relief was achieved from the application of lukewarm water held within her left buccal vestibule. The patient’s dentist had prescribed both an acetaminophen–codeine medication (Tylenol #3), 1–2 tabs every 4–6 h as needed and ibuprofen, 600 mg every 6 h as needed, but pain relief was minimal.

At presentation, the patient’s vital signs (blood pressure, temperature, heart and respiratory rates) were all within normal limits.

Extraoral examination was unremarkable and showed no evidence of lymphadenopathy or facial asymmetry. The patient’s temporomandibular joint regions were unremarkable to palpation, and she had a normal range of mandibular motion. The patient denied any altered perioral–facial sensation or paresthesia, and cranial nerves V and VII were grossly intact. The patient reported mild tenderness on palpation of her left maxillary sinus region.

Intraoral examination revealed no apparent signs of inflammation, abscess or fistula. All soft tissues were within the range of normal. The patient’s oral hygiene level was fair, and there were no obvious carious or oral soft tissue lesions. The extraction site of tooth 36 appeared to be healing normally with no evidence of apical tenderness. The other teeth were not mobile, and there was no evidence of traumatic occlusion. Sensitivity to percussion on tooth 25 was noted. Vitality testing with Hygenic Endo-Ice (Coltene/Whaledent, Altstätten, Switzerland) refrigerant spray containing tetrafluoroethane revealed nonvital responses from teeth 25 and 26 and vital responses from teeth 23 and 24 (controls).

The patient had brought along the limited field-of-view cone beam CT images and radiologic report, which stated that all hard and soft tissues were within normal limits; therefore, there was no indication for further radiographs of the third quadrant.

One periapical radiograph was made of the region surrounding tooth 25, which, as noted above, was found to be clinically symptomatic. This radiograph revealed that a large pin-retained restoration was in close proximity to the pulp chamber of tooth 25, which also demonstrated periapical rarefying osteitis (Fig. 2). Radiographic changes in tooth 26 suggested possible rarefaction involving the palatal root apex. 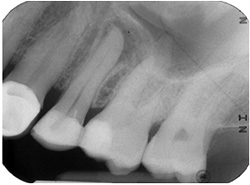 To further confirm the diagnosis and provide symptomatic relief, therapeutic local anesthesia was offered. Placement of topical anaesthetic followed by local infiltration using 1.8 mL of 2% Xylocaine Dental (2% lidocaine HCl and 1:100 000 epinephrine, Dentsply Pharmaceutical, York, Pennsylvania) and 1.8 mL of 0.5%Marcaine (bupivacaine HCl 0.5% and 1:200 000 epinephrine, Dentsply Pharmaceutical) was administered buccally and palatally to tooth 25. Within a few minutes, the patient's reported pain and discomfort had completely subsided. The patient further stated "that she had not felt this good for over a year and a half."

The day after her assessment at Mount Sinai Hospital’s emergency department, the patient visited an endodontist, who confirmed the diagnosis, stating that the pulp of tooth 25 was necrotic and the tooth was symptomatic for apical periodontitis. Non-surgical root canal treatment was completed, and 2 canals were obturated. Tooth 26 was reported to be within normal limits, with referred sensitivity from tooth 25. Following treatment of tooth 25, the patient experienced complete relief from oral pain and associated symptoms.

Oral and facial pain are common symptoms. In most cases, the cause is obvious and the management relatively straightforward.4 If the source or etiology of the pain is not apparent — because the patient is uncooperative or the comprehensive examination is inadequate — it is the patient who suffers additional distress.4

Dental pain of pulpal, periodontal or alveolar origin is the most common cause of orofacial pain and, thus, should be the first consideration on patient presentation. Pain of pulpal origin is often poorly localized and, at times, the patient cannot say with certainty whether it is maxillary or mandibular; thus, proper diagnosis relies heavily on the practitioner’s examination.4,5

Neurologic disorders and associated orofacial pain, including atypical facial pain, are defined as pain in the orofacial region lasting 6 months or longer; having a non-anatomical distribution with signs and symptoms incompatible with a known neurologic syndrome; and with no detected organic or physiological cause.4 It is apparent that diagnosis of this disorder is often one of exclusion. Referred pain or pain perceived in the orofacial region that may be referred from local or distant sites, including but not limited to sinusitis, otitis and cardiac distress, is similar to atypical facial pain, as this disorder again is based on a diagnosis of exclusion.4–6

It has been estimated that over 80% of clinical diagnoses are based on history alone. A further 5–10% are based on clinical examination and the remainder on investigations and special tests.2,3 As such, to diagnose and treat patients successfully, practitioners must conduct a comprehensive examination before ordering further investigations.

During the emergency clinical examination, the patient became quite upset and suspicious, because her entire dentition was examined before the site of her chief complaint, which was left to the end. She stated numerous times that her pain was in her left mandible and that the other areas of her mouth were “not of any concern.” The patient also reported that, in the course of her numerous dental appointments and assessments, no one had ever examined any area of her mouth other than her lower left jaw and, as a result, she was confused.

It is possible that her initial pain was from tooth 36. It is not possible to ascertain whether tooth 36 could have been retained following the root canal treatment, and whether tooth 25 was contributing to or acting as the primary source of the patient’s persistent pain.

Successful clinical treatment depends on a comprehensive assessment of the patient beginning with a chief complaint, history of the chief complaint, medical history and a thorough clinical examination of all soft and hard tissues, followed by appropriate imaging and supplemental tests. Oral health professionals must provide patients with a complete assessment and, when appropriate, reassessment. To allow a patient to suffer 13 months of persistent pain, undergo a variety of treatments and an array of diagnostic tests without ever conducting a comprehensive dental examination is not consistent with optimum patient assessment and care.

This case demonstrates the importance and value of the initial comprehensive history and clinical examination, followed by conventional imaging to arrive at an accurate clinical diagnosis and appropriate treatment plan. Advanced digital imaging does not necessarily provide better patient care.