Light Curing Guidelines for Practitioners: A Consensus Statement from the 2014 Symposium on Light Curing in Dentistry, Dalhousie University, Halifax, Canada 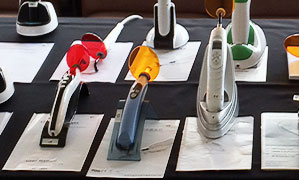 With the adoption of the Minamata Convention on Mercury by Canada and 100 other countries, there will be a global phase down in the use of dental amalgam and an increase in the use of resin composite materials. An important issue when placing light-activated resin composite restorations is the amount and type of light energy that is actually being received by the material. Inadequate light curing of the resin will result in compromised restorative material properties—compromises that will likely have a negative influence on restoration longevity. This is a concern because it has been well documented that, worldwide, in many offices the curing lights are faulty or the operators are using less than optimal light curing techniques. Thus, many resin restorations receive an inadequate amount of energy when they are light cured.1-9 Consequently, it should be no surprise that several recent articles report substandard longevity of posterior composite resin restorations that have been placed in dental offices compared to the results from controlled clinical trials.10-13

To address and discuss these concerns, an international symposium on light curing in dentistry was held at Dalhousie University in Halifax on May 29–30, 2014. The symposium was attended by 40 key opinion leaders from academia and industry who worked together to develop a Consensus Statement with advice on light curing for practitioners (Fig. 1).

Before you light cure, remember to:

* Blanket copyright license is given for this information to be freely used, in whole or in part, for all derivative works without permission from the copyright holder.