Complications of Oral and Maxillofacial Surgery under General Anesthesia in Tube-Fed Children: A Retrospective Analysis 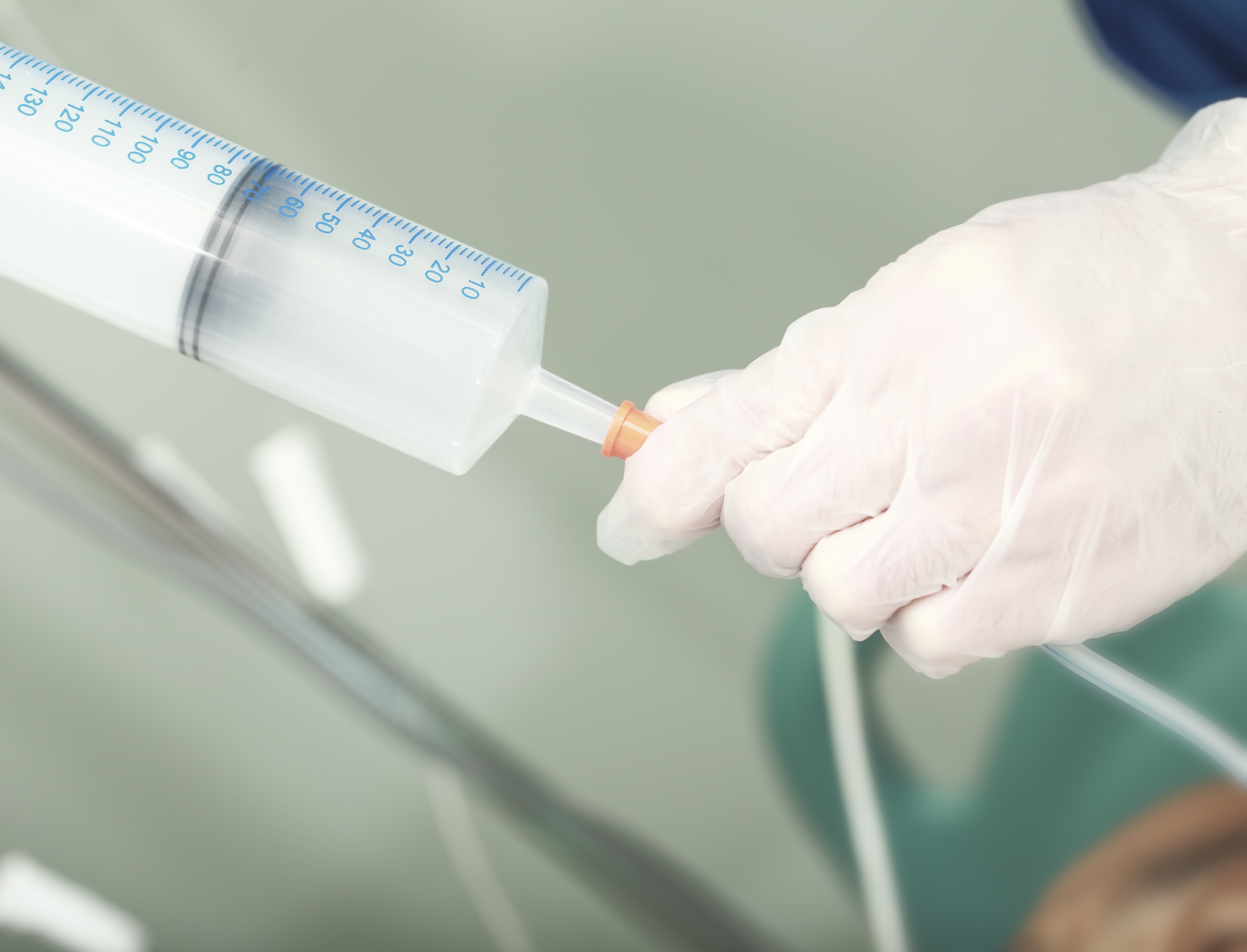 Results: During the period reviewed, 28 children underwent 35 oral and maxillofacial surgery procedures under general anesthesia. The mean patient age was 12 years (range 4–17 years). No deaths occurred. Of the 35 surgeries, 10 (29%) were associated with at least 1 adverse event. Adverse events included 1 incident of respiratory distress, 2 incidents of fever, 5 incidents of bleeding, 1 incident of seizure and 4 incidents of oxygen saturation below 90% for more than 30 s.

Conclusions: Children with a history of aspiration tendency that necessitates enteral feeding, who undergo oral and maxillofacial surgery under general anesthesia, are at increased risk of morbidity. Before initiating treatment, the surgeon and parents or guardians of such children should carefully consider these risks compared with the anticipated benefit of surgery.

The objective of this retrospective study was to investigate the risks associated with oral and maxillofacial surgery performed under general anesthesia in a subpopulation of special needs pediatric patients: children with developmental disabilities and concomitant aspiration risk necessitating enteral feeding.

Dysphagia is the impaired function of 1 or more of the 3 stages of swallowing: oral, pharyngeal, and esophageal.1 Impairment at any of these stages, particularly the pharyngeal stage, increases the risk of aspiration,1 i.e., the inappropriate passage of food solids, liquids, gastric contents or other foreign material into the lungs during swallow.2 Children who aspirate often have an impaired protective airway reflex secondary to muscle fatigue, lack of coordination when swallowing and breathing, difficulty with motor initiation and programming or sensory deficits that limit their ability to detect, organize and control a bolus for swallowing.1

Chronic aspiration can cause inflammation of lung tissue with subsequent development of fibrosis, bronchiectasis, infection, decreased functional lung capacity, respiratory failure and death.3 Clinical signs and symptoms of chronic aspiration include difficulty swallowing that may be observed as coughing, choking or gagging. However, aspiration may be "silent," with no apparent clinical signs during feeding.3 Children with dysphagia and concomitant aspiration risk often require enteral feeding or supplementation to minimize complications associated with dysphagia and aspiration.3

The decision to treat patients under local anesthesia, sedation or general anesthesia should always be based in part on the risks versus benefits of treatment and the relative safety of the treatment modalities. Treatment is carried out when the risk:benefit ratio would be high if treatment was withheld. General anesthesia is considered necessary when the risk:benefit ratio is unacceptably high if treatment is provided under local anesthesia with or without sedation.4-5 The use of sedation, protective stabilization and mouth props in patients with aspiration risk combined with comorbidities or associated behaviour-management challenges can compromise protective airway reflexes and increase the risk of aspiration and other unexpected outcomes.1

Avoiding or deferring dental or oral and maxillofacial surgical care among this patient population can result in infection and damage to contiguous dental, osseous and soft tissues in children, who lack the ability to communicate symptoms to caregivers. Furthermore, patients with progressive medical comorbidities may be at increased risk from general anesthesia if a "wait and see" approach is used and surgical intervention becomes required in the future. There is currently no published evidence regarding the risk of conducting oral and maxillofacial surgery in children with aspiration tendency requiring enteral feeding under general anesthesia.

A retrospective chart review was performed at the Hospital for Sick Children, Toronto, Canada. Patients who had undergone oral and maxillofacial surgical procedures under general anesthesia over a 9-year period (January 1, 2000 to January 1, 2010) were considered for the study if they fulfilled the following inclusion criteria:

For the sample that met these inclusion criteria, we collected the following data from each chart: patient age and sex, time of surgery, medical and surgical diagnoses, surgical treatment plan, whether a pre-surgical anesthetic consultation had occurred, whether the surgery was performed on an outpatient basis or the patient had been admitted, drugs used to administer and maintain general anesthesia, drugs used by the surgeon and type of airways management (oral or nasal). The outcomes we assessed included peri-operative and post-operative adverse events. Data were tabulated and analyzed qualitatively.

Approval to conduct this investigation was obtained from the Research Ethics Board at the Hospital for Sick Children (REB #1000014598).

We reviewed 4174 oral and maxillofacial surgery procedures performed under general anesthesia; of these, 35 surgeries performed on 28 patients met the inclusion criteria. Three oral and maxillofacial surgeons performed all surgical procedures and their experience in practice at the time of the procedures ranged from 5 to 17 years. The mean age of the patients was 12 years (range 4–17 years). All patients were developmentally delayed, presented with multiple medical conditions and required enteral feeding to minimize risk of aspiration. Their medical conditions are summarized in Table 1.


Patients undergoing general anesthesia were assigned an American Society of Anesthesiologists' physical status (ASAPS) classification at the time of surgery. All patients were considered at moderate to high risk for general anesthesia or ASAPS ≥ II.6 At the time of surgery, 2 were classified as ASAPS II, 33 were classified ASAPS III and 1 was classified ASAPS IV. Patients were triaged for pre-anesthesia consultation, post-surgical hospital admission or both by a staff anesthetist. Five patients were seen for a pre-anesthesia consultation while the remainder were assessed on the day of surgery. Post-operative admission was planned for 10 patients; the remainder were discharged on the day of their surgery.

All patients received local anesthetics with epinephrine intraoperatively: 0.5% bupivacaine with 1:200 000 epinephrine or 2% lidocaine with 1:100 000 epinephrine. Oral and maxillofacial procedures included the removal of impacted, infected, carious and/or erupted teeth, gingivectomy, gingivoplasty, treatment of pathological lesions, and/or exposure of impacted teeth. The average duration of the intraoperative procedure was 53 minutes and average time in the post-anesthesia care unit (PACU) following surgery was 137 minutes.

Examination of the operative reports revealed no recorded intraoperative adverse events. Post-operative adverse events were reported in 10 of the 35 surgical procedures (Table 2). Reported complications included 1 case of respiratory distress with prolonged stay in the intensive care unit, 2 cases of fever with 1 requiring admission, 4 cases of oxygen desaturation, 5 cases of bleeding and 1 case of seizure (Table 2). In the latter case, the 10 year old patient had a previous history of uncontrolled seizures.

Three patients had multiple adverse events: 2 reports of bleeding at the site of surgery and oxygen desaturation and 1 report of bleeding and respiratory distress. In the first case of bleeding and hypoxia, the 11 year old patient had a complex medical history that included hypoxic ischemic encephalopathy, seizure disorder, tracheostomy, G-tube, cerebral palsy and scoliosis. This patient had undergone dental extractions and gingivectomy at the time of the procedure. Bleeding, reported as moderate, occurred in the PACU up to 4 h after surgery. It was controlled with local measures including sutures placed at the time of the procedure, absorbable gelatin, packing, pressure and gauze, and the patient was admitted. Blood was suctioned from the tracheostomy the following morning.

In the second case, the patient's medical history included chronic respiratory insufficiency and tracheostomy secondary to myotubular myopathy. The patient was transferred to the critical care unit immediately after surgery, where mild to moderate bleeding occurred intermittently for 8 h. Bleeding was controlled with local measures, including sutures placed at the time of the procedure, gauze and constant pressure. Although bleeding from the surgical site was controlled, an oxygen desaturation event occurred the next morning when blood and a large blood clot were suctioned from the tracheostomy.

Adverse events were reported in 7 of 10 patients for whom post-operative admission was planned and in 3 of 25 patients discharged the same day. Of the 7 admitted patients, 3 were deemed at higher risk during the anesthesia consultation, 3 were planned admissions to ensure a bed would be available if required and 1 was already an inpatient. Of the 3 patients with adverse events, who had been slated for same-day discharge but required admission, 1 was reported to have had a seizure in the PACU, 1 had an oxygen desaturation event in the PACU and 1 had a fever and was admitted 4 days after surgery.

However, the results of our investigation indicate that a subpopulation of special needs patients, children with aspiration risk necessitating tube feeding, may be at increased risk of morbidity when undergoing dental treatment under general anesthesia. Post-operative adverse events occurred in 10 of 35 procedures and included respiratory distress, oxygen desaturation, fever, bleeding and seizure. Causes of complications in these patients were likely multifactorial. Neurological deficits could impair their ability to protect the airway leading to aspiration, an altered ability to maintain spontaneous breathing or both.1 The presence of excess saliva or blood in the oral cavity during oral and maxillofacial surgery procedures could present an increased risk of post-operative aspiration. Complications in these patients may also be exacerbated by their inability to communicate signs and symptoms.

Children with aspiration tendencies frequently present with a myriad of other medical conditions, including developmental delay, cerebral palsy, seizure disorder/epilepsy, progressive neuromuscular disorders, gastroesophageal reflux disease, ventilation/respiratory disorders, craniofacial anomalies and sleep apnea. Because of their complex medical condition and limited ability to cooperate, many of these patients require dental treatment under general anesthesia in a hospital setting.

However, children with aspiration risk necessitating tube feeding are at increased risk of complications when undergoing oral and maxillofacial surgery procedures under general anesthesia. Thus, the risk versus benefit of treatment must be carefully considered, and inherent risks should be outlined in detail to parents and guardians. The requirement for pre-operative sedation, post-surgical admission, or both, to reduce the risk of post-operative complications can be assessed and treatment planned as necessary.12

Children with aspiration tendency necessitating tube feeding who are undergoing oral and maxillofacial surgery procedures under general anesthesia have an increased risk of morbidity compared with the general population. The risk versus benefit of surgery and general anesthesia should be carefully considered.

Acknowledgements: The authors thank Drs. Peter Judd and Michael Casas for their support and review of this manuscript.

Approval to conduct this investigation was obtained from the Research Ethics Board at the Hospital for Sick Children (REB #1000014598).