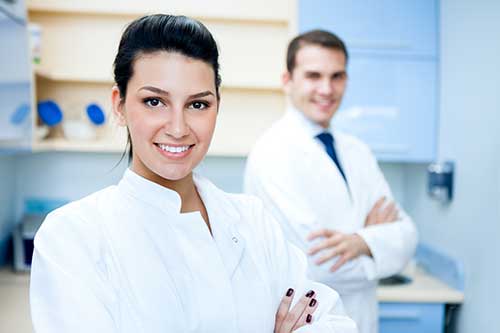 Purpose: To determine the influence of gender on weekly work hours of Ontario dentists.

Methods: In 2012, a 52-item survey was sent to a random sample of 3000
Ontario dentists (1500 men and 1500 women) to collect information on personal, professional and sociodemographic characteristics. The resulting data were analyzed using descriptive statistics and linear regression modeling.

Results: The 867 respondents included 463 men, 401 women and 3 people whose gender was unreported, yielding a response rate of 29%.Most dentists worked full-time, with men working, on average, 2 h/week longer than women. Younger dentists worked more than older dentists. Practice ownership increased weekly work hours, and men reported ownership more often than women. Canadian-trained women worked significantly fewer hours than those trained internationally. Women were more likely than men to work part time and take parental leave and more often reported being primary caregivers and solely responsible for household chores. Women with partner support for such tasks worked more hours than those who were solely responsible. Dentists with children ≤ 3 years of age worked fewer hours than those without children; however, after controlling for spousal responsibility for caregiver duties, this effect was eliminated. More women than men reported making concessions in their career to devote time to family.

The shift toward more women in the dental profession is ongoing, and the impact of this remains unclear. Limited evidence suggests that female dentists work fewer hours than male dentists, are less interested in the business aspect of the profession and are not sufficiently represented in academia and specialty practice.1-7 A decade-old Canadian survey comparing male and female dentists found differences in terms of practice characteristics, work hours, attitudes and income.4 However, studies controlling for practitioner age, marital status, children and practice patterns are lacking. Likewise, clarity regarding barriers, opportunities and the impact of societal gender roles is also needed. Additional insight can be derived from the medical literature, which has highlighted differences between male and female physicians in terms of practice patterns, remuneration, career satisfaction, specialty selection and family–career balance.8-10

A random sample of 3000 dentists practising in Ontario was selected from the Royal College of Dental Surgeons of Ontario provider listing of 8398 dentists (December 2010).13 This survey population was selected, as most Canadian dentists practise in Ontario, the provincial population is ethnically diverse reflecting the overall diversity in Canada14 and gender differences were not expected to vary by province. An initial sample size of 941 was estimated based on the most conservative measure of variation in response to questions (50/50 split), a 95% confidence level and a 3% sampling error.15 This sample size was tripled to 3000, given an expected response rate of 40% or less. The sampling frame was first stratified by gender based on the dentist's name, and a random start systematic sample was drawn from each stratum (1500 men and 1500 women). Ethics approval was received from the University of Toronto's Office of Research Ethics (protocol reference #27977) and a single mail-out was completed in the summer of 2012.

A descriptive analysis was followed by a gender-stratified analysis assessing differences using Student's t tests for continuous and binary variables and χ2 tests for categorical variables.

Preliminary univariate regressions were conducted to assess the significance of variables in predicting the outcome. These included demographic controls, such as gender, age, marital status, location of dental training and graduation year. Work-related predictor variables, such as practice location, most enjoyable aspects of career and speciality training, were also used. In addition, a composite of 5 variables assessing respondents' self-reported business acumen was constructed. Predictor variables assessing familial characteristics, such as the extent of concessions made in a respondents' career to pursue family life, the extent of concessions made by a respondent's partner to aid in the dentist's career, responsibility for household chores and primary caregiver duties, were also used. The absence or presence of children, stratified by dependent age, was also used as a control variable.

Development and testing of the initial model were done using ordinary least squares (OLS) regression. Given the non-normal distribution of residuals (Smirnov-Kolmogorov test), potential outliers and heteroskedasticity, the initial OLS model was re-run using robust regression. The latter technique gives less weight to observations with large residuals that would otherwise bias the results. Both the OLS and robust regression indicated that no observations were eliminated and similar effects of the various predictor variables were found.

Work-related statistics revealed that dentists worked an average of 36 h/week. Most (82%) worked full time (≥ 30 h/week) and were practice owners or partners (78%). Familial statistics revealed that most dentists were married (84%) and had children (83%). Most reported some degree of spousal support in terms of both primary caregiving and household responsibilities (61% and 65%, respectively).

Familial data revealed that a higher proportion of men had children (88% men vs. 78% women, p < 0.01) and had 1 or more child aged ≥ 8 years (69% men vs. 49% women, p < 0.01). In contrast, a higher proportion of female dentists had children aged ≤ 7 years (29% women vs. 19% men). More female dentists considered themselves to be primary caregivers (24% women vs. 8% men) and solely responsible for household chores (41% women vs. 10% men). Female dentists also perceived themselves to have made concessions in their career in favour of family significantly more than men (p < 0.01), while male dentists perceived that their partner had made significant career concessions to aid in their career (p < 0.01).

Among this sample of Ontario dentists, women worked, on average, 2 fewer hours a week than men, which may have few implications. Apart from the current maldistribution of dentists between urban and rural areas, there is arguably no shortage of dentists in Ontario as a whole. Over the past decade, that number has increased by 37%, while the dentist-to-population ratio has decreased by 16%.16 Although not a robust measure of labour supply, the dentist-to-population ratio is expected to continue to drop and potentially compound itself beyond 2020.16 Likewise, the time dentists spend per patient has also increased by 20% over the past decade.16 From 2009 to 2013, new registration as dentists by Canadian dental graduates was also up by 7% and by 159% for internationally trained dentists in the same period.17,18 In short, an under-supply of dentists is not expected.

More important, our findings indicate differences in expectations, career goals and practice patterns between male and female dentists. For example, the greater preference of women for part-time work may be a surrogate for other differences between male and female practitioners, including familial relationships, career planning and institutional obstacles. It would appear that the discrepancy in the number of work hours between male and female dentists can be attributed, at least in part, to the degree of partner support for family responsibilities, including child care and household chores. Other reports, for example, have documented that 86% of female physicians' partners were employed full time versus 45% of male physicians' partners and that the latter were 4 times more likely to be employed part time or not employed outside the home.19 The same study demonstrated that female physicians devoted over 8 h/week to domestic duties compared with their male colleagues. In fact, many of the findings of our survey regarding part-time work, the mitigating role of spousal support and institutional and personal factors influencing work–life balance are corroborated in the literature exploring gender differences in work outcomes among physicians.19-22

Yet, although much of the currently available data on career preferences and patterns is from surveys of female physicians, the dental profession is quite different from the medical profession in its organizational structure. With most dentists working independently as entrepreneurs, fewer system-level issues may be affecting women's practice patterns. In dentistry, outcomes related to fairness of income, flexibility within an organization, mentorship, promotion and academic productivity may be more apparent at the specialty, hospital and academic level than in private practice. In private practice, relevant issues may be burnout, changing attitudes toward work–life balance and potential loss of autonomy as practice ownership is associated with longer work hours. With women reporting marginally less confidence in their business acumen, combined with greater domestic responsibility, it is not surprising that women are more likely to work in associate positions. Moreover, the dental curriculum is largely devoid of business training, which is negative for all dentists. Knowledge of business practices is thus typically acquired through self-learning or mentorship. With the increasing presence of women in the profession, incorporating business training in the dental curriculum or providing it after graduation through professional bodies should be encouraged, which, in turn, would be a positive development for all dentists.

Limitations to this study include the sampling strategy, i.e., the initial stratification of the sample into men and women was based on the dentist's name, making it inexact. A second and more substantive limitation was the small sample size, which gives rise to the possibility of non-response bias. However, the results of our study are similar to statistics published by the Ontario Dental Association, which provides some confidence that they may be generalized to the broader Ontario dentist population.23

Based on our findings, female dentists' preference for or obligation to work fewer hours than men is largely a function of domestic responsibilities. Although the practice patterns, preferences and expectations of female dentists may differ from those of men, the impact of such differences on the provision of care is unknown and requires further analysis. Strategies to improve business training and the balancing of work–life responsibilities should be considered in the curriculum of future cohorts. Likewise, policies to advance training and interest in academia and leadership in female dentists may prove to be equally important.

Gender, age, ownership status, training location and degree of spousal support for household and caregiving responsibilities were found to be predictors of the number of hours worked per week in this sample of Ontario dentists. For women specifically, training location and household and caregiving responsibilities predicted work hours.