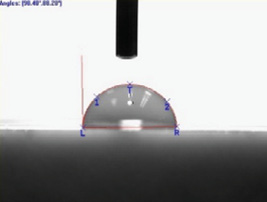 Materials and Methods: We tested various consistencies of vinyl polysiloxane (VPS; Imprint 4) and vinyl polyether silicone (VPES; EXA’lence) with a polyether (PE; Impregum Soft) control. Impression discs (25.07 mm) were made using a metal die and ring. Deionized ultra-filtered water was placed on each disc and contact-angle measurements were made at 0, 15, 30, 45 and 60 s using a video contact angle drop shape analysis machine. The data were analyzed using repeated ANOVA and a post-hoc test with Bonferroni correction.

Conclusions: Set VPS is more hydrophilic than VPES. Contact-angle values of VPS indicated super hydrophilicity. VPES was hydrophilic, with measurements similar to the PE control. Thus, VPS impression materials may be excellent in terms of spreading and copying wet surfaces.

A hydrophilic impression material is expected to flow into moist areas and copy surfaces correctly, resulting in fewer chances of air entrapment in the impression. Pouring dental stone into the impression would also be more successful as the water-based stone mix wets the impression surface easily, resulting in a void-free cast. In general, the advancing contact angle for elastomers is greater than 45°.6 In a previous study, addition silicone elastomers, with surfactants added to increase their wettability, had water contact angles around 45°, whereas the angle of other, less hydrophilic addition silicones, measured 90° or more.7

There are several reports on the wettability of addition silicone and polyether materials in the dental literature. These reports evaluated wettability by studying contact angles,8 voids or defects in impressions and poured casts,9-12 or both contact angles and void formation in casts.13-15 Other studies include the effect of disinfectants,16-22 surfactants23-25 and glow discharge.26

GC America (Alsip, Ill.) claims that EXA’lence, a vinyl polyether silicone (VPES) impression material, is intrinsically hydrophilic because of its polyether content. Imprint 4 (3M ESPE, St. Paul, Minn.) is a VPS introduced as a new hydrophilic addition silicone impression material. These materials are produced in several consistencies for use in restorative treatment (Table 1).

A study27 comparing the contact angles of water and saliva on unset light-body Imprint 4 (VPS) and unset extra-light-body EXA’lence (VPES) showed that the modified VPS had a water contact angle < 20° whereas the hybrid VPES angles were higher, around 35°. No studies on the wettability of other consistencies or on set Imprint 4 or EXA’lence have been reported.

Therefore, this investigation aimed at studying the wettability of set Imprint 4 and EXA’lence impression materials by comparing their advancing contact angles using a PE, Impregum Soft (3M ESPE)  control. As both materials are claimed to be hydrophilic, the null hypothesis was that there would be no significant difference in water contact angle between set Imprint 4 and EXA’lence.

Advancing contact-angle measurements were made on the set surfaces of Imprint 4 and EXA’lence at 5 times over 1 minute. The materials used consisted of 2 Impregum Soft, 6 Imprint 4 and 8 EXA’lence products (Table 1). A stainless-steel die and ring (Sabri Dental Enterprises Inc., Downers Grove, Ill.) were used to make 5 discs of each material, resulting in a total of 80 discs.28 The round impression discs, which were 25.07 mm in diameter, were made according to manufacturer’s instructions at room temperature (23° ± 2°) and relative humidity 55 ± 5%, but were left for an extra 30 s beyond the recommended setting time before removing them from the ring.

Each disc was tested with 5 separate droplets of deionized ultra-filtered water, with 2 contact-angle measurements made (right and left sides, Fig. 1) for each, at 0, 15, 30, 45 and 60 s, resulting in 50 measurements for each material tested per time point.

Figure 1: Location of the 5 measurements made on each water droplet.

The contact angle of water droplets was measured using a drop shape analysis (DSA) machine (VCA Optima, AST products, Inc. Billerica, Mass.). A disc was placed on the platform of the VCA Optima machine just below the needle, from which a 1-μL water droplet was dispensed from the 100-μL pipette and the contact angle was measured in degrees using the software included with the machine. A video recording was made showing water droplet activity on the disc surface, so that contact-angle measurements could be made at the specified time intervals. The recording was stopped every 15 s to make 2 measurements as described above. After 5 markers (L, R, 1, 2 and T) were manually placed around the droplet using the computer mouse, the manufacturer’s software automatically calculated the contact angles. Repeated measures ANOVA was carried out to compare average contact angles of the materials over time and a post-hoc test with Bonferroni correction was applied. As Table 2 shows, there was a significant difference in contact angles between Imprint 4 and EXA’lence (mean difference 33.9°, p < 0.05) and between Imprint 4 and Impregum measurements (mean difference 32.8°, p < 0.05). However, there was no significant difference between EXA’lence and Impregum overall during the 60 s (p = 0.196). The mean differences between most tested consistencies and test times were small, ranging from 0.7° to 2.9°, except for Imprint 4 heavy and super quick heavy. Contact angles for these consistencies were significantly different from all other Imprint 4 materials (p < 0.05), but similar to each other (p = 1.00). Overall mean differences of heavy and super quick heavy consistencies ranged from 11.2° to 12.6° compared with regular and light Imprint 4, and from 50.4° to 58.7° (p < 0.05) compared with all Imprint 4 consistencies at time 0 s (Figs. 2 and 4).

The null hypothesis, that there would be no significant differences between the water contact angles of Imprint 4 and EXA’lence was rejected, as Imprint 4 had much lower contact angle values.

In general, elastomeric impression materials have contact angles around or greater than 45°. An early study13 reported values of 53° for a surfactant-modified (hydrophilic) VPS, 49° for a PE, and 98° for the regular VPS tested. Unlike PE which has affinity for water, VPS can be improved in terms of wettability by incorporating non-ionic surfactants. The surfactant molecules diffuse from VPS into the aqueous phase in contact with it, increasing wettability and lowering the surface tension.6 Another early study14 showed a range of contact angles for water on silicone surfaces from 38° to 108° depending on surfactant type and concentration (not all surfactants led to a decreased contact angle). Such variations in contact angle are seen in other studies too. Vassilakos and Fernandes15 reported a range of 50°–86° for VPS contact angles on specimens exposed to saliva vs. 30°–45° for PE; these contact angles are close to the 60°–84° range for VPS and 35° for PE report, which also showed a correlation between wettability and the number of voids in stone models.3 These findings indicate that surfactants play an important role both before and after the setting of VPS.

Furthermore, surfactants incorporated into impression materials leach out into liquid in contact, hence reducing the liquid’s surface tension and allowing it to spread over the material surface.23 Kanehira et al.8 also stated that hydrophilic VPS probably has a continuous supply of surfactant that diffuses to the surface leading to a step-wise reduction in contact angles. This explanation was made as repeated rinsing of surfactant, containing VPS produced higher contact angles that settled at 85°. Lee et al.24 studied the effect of incorporating different surfactants in impression materials and found that contact angles decreased as the concentration of a non-ionic surfactant increased. The contact angle ranged from 84° with 0.5% surfactant to 33° with 2.5% surfactant, compared with 105° without surfactant.

In comparison, the results of our study show that, regardless of the initial measurement (at 0 s), Imprint 4 contact angles averaged around 10° at 60 s, indicating super-hydrophilicity. The high initial values for the two heavy-body materials (around 80°) might be a result of the high percentage of filler, compared with lighter consistencies, which might keep the surfactant from reaching the surface quickly, as those high initial measurements dropped sharply after 15 s (Fig. 4). EXA’lence, on the other hand, was similar to PE in terms of wetting behaviour (Fig. 5), as average angle measurements dropped within the first 15 s from above 80° to a range of 40°–43°. This average is comparable to other reports on PE indicating that the PE component of EXA’lence may have affected the outer surface of the material leading to behaviour similar to that of PE alone.

Although several reports have shown variable contact angles with surfactants from 60°–90°,17-19, 21 the current investigation showed the contact angles of Imprint 4 from 17°–36° at 0 s to 7°–12° at 60 s for light and regular consistencies. For materials studied during setting, the faster kinetics toward hydrophilicity led to high-quality impression results, which could be partly the result of intrinsic surfactants.4 Menees et al.27 hypothesized that the inherent chemical composition of the hydrophilic PE and hydrophobic VPS could also explain the behaviour of these materials. Imprint 4 contains a modified polyalkylene oxide surfactant with hydrophilic and hydrophobic regions. However, for hybrid materials, EXA’lence (with no surfactant) had high contact angles using water and saliva but Identium (with a surfactant) had the lowest angles, probably because of its surfactant content and grafted polyether groups.

Limitations of the Study

The setting time of impression materials is recommended by the manufacturer based on clinical use. As temperature may affect setting properties, in vitro tests at room temperature may differ from the clinical setting.29 An extra 30 s beyond the manufacturer’s recommended setting time was added in our experiments and was consistent for all materials.

After the initial 15 s of testing, contact angles for EXA’lence were similar to those for Impregum Soft.

Acknowledgement: This study was supported by University of Alberta Fund for Dentistry grant DEN 18.