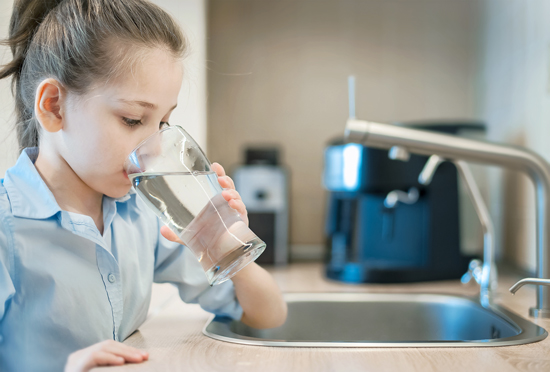 This investigation aimed to determine whether fluoride concentration in water at the user endpoint remains the same as at the adjusted source, i.e., water treatment facilities.

Daycares in Alberta, Canada, were used as the endpoint to measure fluoride concentration. They were randomly selected from a list of 400 licensed daycares provided by the Ministry of Children’s Services. All water samples collected from the daycares were sent to the accredited Alberta Centre for Toxicology (ACFT) for analysis within 7 days of collection. ACFT used ion chromatography to determine fluoride concentration levels. Statistics analyses were conducted using the software SPSS 25.

Water samples were collected from 141 daycares in 35 municipalities. In municipalities that adjust fluoride content, public water is supplied by 8 Alberta Environment & Parks regulated water systems. Fluoride concentration in water samples examined at the endpoint ranged from 0.58 mg/L to 0.79 mg/L. The differences between fluoride concentration at the water treatment facilities and the daycares ranged from −0.03 to 0.22 mg/L.

This study confirms that the concentration of fluoride adjusted at water treatment facilities in Alberta is maintained at endpoints at the approximate optimal level of 0.7 mg/L.

Although mainly preventable, dental caries are the most common chronic disease worldwide and pose public health challenges at the population level.1,2 Fluoride has been well established as an effective measure to prevent dental caries, and community water fluoridation (CWF) is considered to be the most cost-effective population-wide preventive measure.3 Fluoride has both pre- and post-eruptive effects. The pre-eruptive effect refers to integration of the fluoride ion into the enamel structure during tooth development, as it changes hydroxyapatite into fluorapatite.4 The post-eruptive effect refers to remineralization and inhibition of demineralization of tooth enamel in early childhood caries.5

Through the topical and systemic effects of ingested fluoride, children < 8 years old greatly benefit from water fluoridation during tooth development, although all ages benefit from fluoridation related to post-eruption effects.1,2 Topically, tooth enamel is strengthened and forming teeth incorporate fluoride, which leads to caries prevention in adulthood. In the delivery of CWF, the concentration of fluoride in drinking water is the most important factor in its effectiveness. Although CWF is delivered through water treatment facilities (WTFs) and public water systems, limited research has been done on tap water as the fluoride concentration’s endpoint. Therefore, this investigation aimed to determine whether fluoride concentration in tap water at daycare facilities across the province of Alberta, Canada, remains the same as at the WTF.

This research was part of a larger project aimed at measuring the lead concentration in public drinking water. During the first of 3 rounds of water collection at daycares, 1 sample was also tested for fluoride, as the volume was sufficient to support both analyses. The Ministry of Children’s Services provided a comprehensive list of 400 eligible licensed daycares in Alberta. We calculated a target sample size of 140 daycares based on a 95% confidence interval and a 6.7% margin of error. Samples were stratified according to daycare location using Alberta Health Services (AHS) zones: North, Edmonton, Central, Calgary and South.

The daycares were further assessed using a pre-screening survey developed to help select facilities with a variety of possible risk factors related to lead in drinking water. The final selection was approved by the AHS Environmental Public Health zone directors. The management of each selected daycare was informed of its inclusion in the research project, and information about the research project was provided to the parents/caregivers of the children attending the daycares.

From September to December 2017, water samples were collected by environmental public health practicum students using a random daytime sampling protocol. Samples were collected only from taps and fountains that were frequently used for drinking. Water was collected as a single 250-mL sample in 500-mL chemical analysis bottles supplied by the Alberta Centre for Toxicology (ACFT). All water samples were sent to and received by the ACFT for analysis within 7 days of collection. The ACFT used ion chromatography to determine water fluoride concentrations.

All data handling and evaluation occurred electronically using a password-protected computer on a secure network. Descriptive statistics for the water samples, daycare facilities and WTFs were used to analyze the data and compare means. The sample is independent, and the assumptions were met, allowing for 1-sample t test analysis at a 95% confidence interval. Data analyses were carried out using SPSS (v. 25, SPSS Inc., Chicago, IL, USA). We used the Kolmogorov-Smirnov test to verify assumptions of normality, equal variances and independence. A parametric or non-parametric test was then chosen to analyze the data, based on the Kolmogorov-Smirnov test results.

Water samples for fluoride concentration analysis were collected from 141 randomly selected daycares across Alberta, located in 35 municipalities, some with fluoridation of the public water supply and others without or unknown (Table 1). Most samples were collected from a kitchen faucet and, in a few cases, from faucets located in classrooms and water fountains. One of the daycares selected for this investigation uses water from a private well (groundwater source) and another uses hauled water (supplier unknown).

The daycares with adjusted fluoride concentrations in their public water supply (n = 72) were located in 19 municipalities. In these municipalities, water is supplied by 8 Alberta Environment & Parks (AEP) regulated public water system providers (Table 2). Each municipality is supplied by only 1 AEP regulated water utility. The fluoride concentration of water samples collected in daycares ranged from 0.58 mg/L to a maximum of 0.78 mg/L (mean 0.68 ± 0.50 mL).

Figure 1: Average fluoride concentration in water at water treatment facilities (WTFs) and the daycares they serve in Alberta.

The data showed a normal distribution when analyzed using the Kolmogorov-Smirnov test (p = 0.11). Because the assumptions of normality, equal variances and independence were met, a parametric test was used to analyze the data. Fluoride concentration in water at each daycare was compared with the fluoride concentration at the WTF providing the water. However, this analysis requires at least 5 observations; thus, only WTF-B (35 daycares), WTF-G (14 daycares), WTF-F (5 daycares) and WTF-C (12 daycares) met this criterion. Based on these 66 observations, we identified significant differences between the concentrations of fluoride at the WTF and in water samples at the daycares they serve (Table 3). The overall results show a mean fluoride concentration at the endpoints of 0.76 ± 0.06 mg/L (p = 0.02) and a mean difference of −0.06 (95% CI −0.01, −0.11).

To our knowledge, this is the first study looking at differences in fluoride concentration between WTFs and endpoints. It shows that the public health measure to prevent dental caries provided by CWF accomplishes its objective: to deliver fluoride at the recommended concentration. The 2010 Guidelines for Canadian drinking water quality12 recommend 0.7 mg/L as the optimal target concentration of fluoride in public drinking water. This concentration, established by Health Canada, is based on daily intake of fluoride from various sources, such as drinking water, food, beverages and toothpaste. It provides desirable dental health benefits and is well below the maximum acceptable concentration (1.5 mg/L), and does not pose a risk to human health.

In Canada, although the federal, provincial and territorial governments establish guidelines, the decision to adjust fluoride levels in public water supplies is made by municipalities. High concentrations of naturally occurring fluoride in drinking water sources are relatively infrequent in Canada, which helps to justify the recommendations for adjustment of fluoride concentration in public water supplies for dental caries prevention.12,15 The specific types of chemicals used to adjust the fluoride concentration at a WTF vary, but they are all certified by the National Sanitation Foundation for drinking water treatment (NSF/ANSI standard 60). Examples include fluorosilicic, hydrofluorosilicic and hydrofluosilicic acids. These additives are used to adjust fluoride levels in drinking water to 0.8 ± 0.2 mg/L.

In this project, 67 samples were taken from daycares that were not supplied with water adjusted for fluoride. For these facilities, the average concentration of fluoride observed at the endpoint was 0.17 mg/L, with the highest level 0.41 mg/L. These results support the above statement that naturally occurring fluoride in drinking water supplies is below the recommended 0.70 mg/L guideline for dental health.

One considerable limitation of this project is the fluoride concentration at the WTF. Although the information provided by the WTF is reliable, the test for fluoride concentration was not performed by the same laboratory and the analytical methods may not have been the same as those used to test water from the daycares (e.g., ion chromatography). However, WTFs use an accredited laboratory and standard methods to assess fluoride concentration. We used average concentration at the WTF versus a 1-time grab sample at the daycare facilities. These differences could explain some of the variations in fluoride levels between WTF and daycare. For instance, 10 observations showed a small increase, ranging from 0.01 to 0.03 mg/L, in fluoride concentration at the endpoint compared with that at the WTF, which is difficult to account for. In addition, the sampling could be considered a limitation. It would have been interesting to include more samples from daycares that were supplied by WTF-G and WTF-H, as these were associated with the most considerable changes. Not all AEP-regulated systems that fluoridate were tested. This would have given a much better picture.

This study confirms that fluoride adjusted concentration at the WTFs in Alberta is maintained at the endpoints (daycares) at the approximate optimal fluoride concentration of 0.7 mg/L with a variation of concentration ranging from 0.58 to 0.78 mg/L.