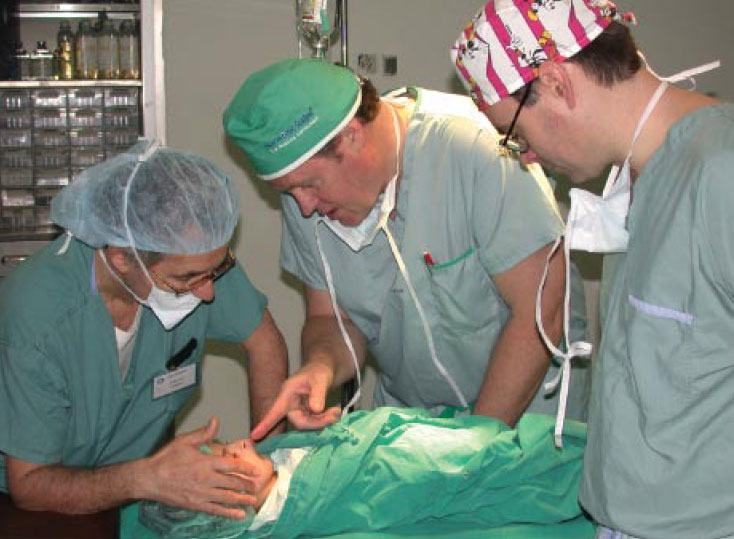 Dr. David Precious says volunteering internationally gives him "a direction that has meaning." Since 1995, the dean emeritus of dentistry at Dalhousie University has travelled annually to Vietnam with a team of maxillofacial surgeons to perform surgery on children with cleft lip and palate.

"It's a life-changing operation," explains Dr. Precious. "From a surgeon's point of view, performing a procedure on a young child that truly makes a difference is very compelling."

Dr. Precious is often joined on these international outreach missions by Dalhousie colleagues Drs. Reginald Goodday, Ben Davis, Archie Morrison, Chad Robertson and Michael Shimizu, a former fellow in the Dalhousie program who is now with Schulich Dentistry at the University of Western Ontario. In 2009, a group of surgeons from Dalhousie that was joined by a team of Japanese doctors led by Dr. Takeshi Uchiyama performed more than 50 cleft lip and palate operations in Ho Chi Minh City and Vinh Long.

Trips to Vietnam are complemented by similar missions to Tunisia (since 1999). More recently Dr. Precious has started teaching surgical procedures to colleagues in Brazil and India. He estimates that the group of surgeons has likely performed close to 1000 surgeries worldwide.

While he is quite proud of these cleft surgery missions, Dr. Precious points out that the paradoxical goal is "to work ourselves out of the need to go." With more local surgeons being trained during each visit, he hopes that eventually the missions to Vietnam and Tunisia will no longer be necessary.

When Dr. Precious initiated these international charity missions at Dalhousie's faculty of dentistry, he was adamant that they not simply be short-term, "in-and-out" visits by clinicians—so-called "safari surgeries."

"Very few missions are properly integrated with local health authorities or include follow-up with patients," he says. "You will have little long-term impact on a community if you don't teach local practitioners the techniques you are performing," adds Dr. Precious.

Like many volunteers, Dr. Precious finds that fellowship with his co-workers, in particular the Japanese and Tunisian colleagues he has worked with in Vietnam, has been one of the most rewarding aspects of the missions. "We've learned from each other and I've made lifelong friends."