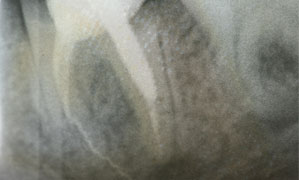 Paresthesia as a result of mechanical trauma is one of the most frequent sensory disturbances of the inferior alveolar nerve. This case report describes surgical treatment for paresthesia caused by a compressive phenomenon within the mandibular canal. The cause of the compression, a broken instrument left in the patient's mouth during previous endodontic therapy, was identified during routine radiography and computed tomography. Once the foreign object was removed by surgery, the paresthesia resolved quickly. This case highlights the potential for an iatrogenic mechanical cause of paresthesia.

Paresthesia of the mouth is described as a sensation of tingling in the lower lip, which may be continuous or intermittent.1 Patients have described the sensation as warmth, cold, burning, prickling, tingling, pins and needles, numbness, itching and formication.1-5 The paresthesia may be associated with mechanical trauma, a pressure phenomenon, a neurotoxic effect or thermal injury.1,6

The following case report describes imaging and surgical treatment for a patient with paresthesia caused by a compression phenomenon.

A 23-year-old woman presented to a private dental office in September 2009 with pain in the left and right sides of her mouth because of irreversible pulpitis of teeth 26 and 36. She had never smoked or consumed alcohol and had no personal or family antecedents of relevance. Intraoral clinical examination revealed a fracture in the filling of tooth 37, several dental caries and severe gingivitis.

Periapical radiographic examination showed that a broken endodontic instrument was present in the mesial root of tooth 37. The radiography also revealed chronic apical periodontitis of the distal root, as well as a radiolucency in close proximity to the inferior alveolar nerve, apparently in direct contact with the nerve (Fig. 1). The patient was asked about the prior endodontic treatment. She recalled that it had been performed in 2003 and reported that since then, she occasionally felt numbness of her left lip and a small part of her chin. She also reported a tingling sensation in the vestibular gingiva. The symptoms were more aggravated in the morning and during stressful situations. The patient mentioned that she was concerned about the numbness and had already visited a neurologist. The patient's soft-tissue sensitivity was not evaluated because the paresthetic symptoms were not evident at the time of the current appointment.

Because of the proximity of the foreign object to the inferior alveolar nerve, computed tomography (CT) was performed, to determine the location and dimensions of the object and its relation to the anatomic structure. The CT scan revealed the broken endodontic instrument in direct contact with the mandibular canal. The instrument extruded about 3 mm from the apex of the tooth and the periapical radiolucency (Figs. 2 and 3). 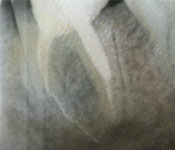 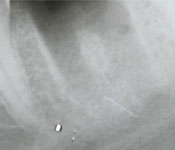 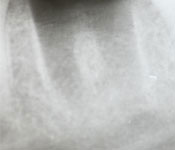 Figure 1: Periapical radiographs of tooth 37, before, during and after surgery, respectively.

Figure 3: Multiplanar reconstructions of tooth 37, showing both the endodontic instrument and the periapical radiolucency in direct contact with the inferior alveolar canal.

Extraction of tooth 37 and removal of the broken instrument were proposed. The patient was informed of the complications that might occur during and after the surgery. The tooth was sectioned, and the distal and mesial roots were removed separately. The area was thoroughly curetted until the small fragment of the broken instrument could be removed (Fig. 4). The periapical radiolucent lesion associated with the distal root was also curetted. 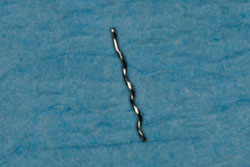 After the surgery, to avoid swelling and pain, we prescribed an antibiotic (amoxicillin 1 g, 1 tablet twice daily for 8 days), corticosteroid (methylprednisolone 16 mg, decreasing dose from 4 tablets on the first day to 1 tablet on the fourth day), analgesic (paracetamol 1 g, 1 tablet twice daily for 3 days) and a vitamin B complex (Neurobion [Merck KGaA, Darmstadt, Germany], 1 tablet daily for 2 months). The patient was advised to rinse her mouth with chlorhexidine gluconate 0.2% 3 times daily for 15 days. Eight days after surgery the patient reported that the sensation of numbness had disappeared.

There are 4 main causes of oral paresthesia. The first, mechanical trauma, is due mainly to overinstrumentation beyond the apex resulting in damage to the inferior alveolar nerve, which is normally associated with the second molars.6 The second, a pressure phenomenon, may occur when obturation material or endodontic instruments are present within the inferior alveolar canal.3,7 The third, neurotoxic effects, are related to solutions used to clean the root canal or solutions used as sealants.6 The fourth main cause is thermal injury. Overextension and overinstrumentation are the causative factors most often found in paresthesia secondary to orthograde (conventional) endodontic therapy.8

Dental paresthesias may occur in association with root canal therapy but are not limited to this context. For example, some patients presenting with symptoms of paresthesia should be screened for the presence of necrotic pulp in adjacent teeth, as described by Cohenca and Rotstein.9

Screening should also be performed for other local factors, such as mandibular fracture, expanding or compressive lesions (including malignancy), impacted teeth, iatrogenic lesions after tooth extraction, anesthetic given by injection, implants and sequelae of orthodontic surgery.2,4,9 Iatrogenic injury is the most common cause of sensory disturbances of the inferior alveolar nerve.5

There seems to exist a correlation between the duration, origin and significance of the injury and the prognosis for the paresthesia. The longer the mechanical or chemical irritation persists, the more degeneration of the nerve fibre that will occur and the greater the risk that the paresthesia will become permanent.1

Seddon10 described 3 levels of nerve injury, based on the severity of the injury, the prognosis and the time for recovery: neuropraxia, axonotmesis and neurotmesis. Neuropraxia is most commonly due to compression of the nerve. Recovery is complete and takes a few hours to days. Axonotmesis is defined as loss of nerve continuity. In this situation, the recovery, which takes several months, is ultimately incomplete. Neurotmesis is the most severe grade of injury to the peripheral nerve. Complete recovery is impossible, although partial recovery may occur if primary repair is undertaken.

The main mechanism of injury of peripheral nerves is compression. Compression of the arterial blood supply to the nerve results in increased vascular permeability, edema and ischemia, and the amount of oxygen delivered to the nerve is thereby reduced.5 The classic response in cases of neuropraxia is paresthesia, but axonotmesis may also occur if the compression lasts long enough; in these cases the recovery can take up to 1 year.

According to the anatomic study by Tillota-Yasukawa et al.,1 the cancellous bone in the molar region has numerous vacuoles, and there is no cortical bone protecting the pedicle. In 8 of the 40 cases examined by these authors, there was slightly denser cancellous bone around the canal, but it was full of perforations that would prevent effective protection of the nerve. The authors also determined that the distance from the inferior alveolar nerve to the apices of the second and third molars was less than 1 mm. In contrast, Littner et al.11 stated that the upper border of the mandibular canal is usually located 3.5 to 5.4 mm below the root apices of both the first and second molars and that the mandibular canal was never found in close proximity to the first and second molar apices. These latter findings were corroborated by Knowles et al.,3 who confirmed that the mandibular canal is cribriform, not solid. This distance should be evaluated by careful radiographic assessment when endodontic treatment of the second molars is required.12

During endodontic treatment, a radiograph should be obtained with the files at the proper working length to prevent perforation and damage to the inferior alveolar nerve. If mechanical damage to the inferior alveolar nerve caused by an endodontic instrument does occur, it may be repaired by a process of scarring, which will result in immediate but temporary paresthesia.1,13 The extensive preparation associated with endodontic treatment results in the disappearance of the apical constriction, which allows for the passage of irrigation products and obturation material and which, in turn, causes nerve injury, either chemical or mechanical.

Overinstrumentation may also occur if a granuloma is present at the apex. This type of lesion forms an osteolytic area of lower-density bone in the periapical zone, which may allow instrumentation beyond the apex and injury to the inferior alveolar nerve.13

When possible, therapy should begin with removal of the proximate cause. Inflammation, edema, hematoma or infection should be controlled,2 so as to prevent irreversible changes such as reactive fibrosis and neuroma.2,5,13,14 The drugs available include antibiotics, nonsteroidal anti-inflammatory drugs and corticosteroids, proteolytic enzymes (to disintegrate any coagulum) and vitamin C (for its antioxidative action).2 Gatot and Tovi15 suggested administering prednisolone to shorten the course of the condition, prevent fibrosis and diminish the severity of sequelae. However, there has been no agreement about the appropriate type, dose or duration of steroid therapy. Surgical therapy is indicated in cases of sectioning of the nerve, compression caused by a foreign body, neural neoplasia, and persistent anesthesia or paresthesia.2 The main benefit of surgical intervention in the early stages of paresthesia is restoration of the neural microvasculature, which makes recovery of the nerve possible. Nonetheless, the results of surgical decompression are unpredictable, and surgery carries certain risks, including nerve transection or other damage that might lead to complete anesthesia.14 Girard16 proposed caution in any procedure with the potential to cause nerve damage.

Several drugs for promoting recovery from nerve injuries have been evaluated, including vitamins B1, B6 and B12 (the composition of the vitamin B complex administered to the patient described in this case report). Although these substances improve the regeneration of peripheral nerves in animal models, their effects in humans are not supported by scientific evidence.17-19

In the case described here, the paresthesia probably had several contributing factors, including the broken endodontic instrument, the periapical radiolucent lesion in direct contact with the mandibular canal and associated inflammatory responses. The rapid resolution of the paresthesia suggested that its cause was a compressive phenomenon affecting the inferior alveolar nerve, compatible with neuropraxia.

Because of the close anatomic relation between the second molars and the inferior alveolar nerve, careful clinical and radiographic examinations should always be performed before endodontic treatment of these teeth, so as to prevent iatrogenic injuries of the type described here. Dentists should also be aware of the anatomic characteristics of the mandibular canal (i.e., cribriform rather than solid), as well as the consequences of overinstrumentation.