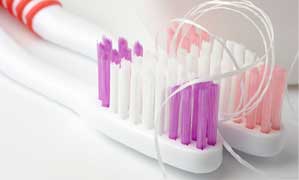 Flossing remains an effective adjunct to toothbrushing, according to the results of a recent systematic review.1

The Cochrane review examined the effects of flossing (self- or professionally performed, supervised or non-supervised) in addition to toothbrushing in the management of periodontal diseases and dental caries in dentate participants age 16 years and older, compared with toothbrushing alone.

Dr. Trevor Johnson, vice-chair of the research committee of the faculty of general dental practice at the Royal College of Surgeons in the United Kingdom, was an author on the systematic review.

“The results showed that at the 3 time points studied (1, 3 and 6 months), there was a statistically significant benefit in the reduction of gingivitis by using floss plus toothbrushing, compared to toothbrushing alone,” says Dr. Johnson. “Along with demonstrating a statistical significance, there is a clear indication of an important clinical benefit.

“Patients are often rightly concerned about ‘bleeding gums’ and this review shows that flossing is effective in reducing gingivitis and the tendency for gums to bleed,” he adds. “So patients will have an improved gingival condition and an improved quality of life.”

Although the study results support the use of regular flossing with toothbrushing, the authors were unable to make definitive conclusions on the benefits of flossing in reducing the risk of dental caries, because none of the included studies used caries as an outcome. “There is clearly scope for further research in this area, preferably by undertaking RCTs,” notes Dr. Johnson.

“However, dentists can be confident when recommending flossing for reducing gingivitis as part of preventive oral health care programs for patients.”