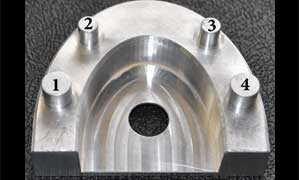 Methods: Two alternative impression materials, AlgiNot FS and Position Penta Quick, were compared with a traditional irreversible hydrocolloid, Jeltrate Plus antimicrobial alginate. Impressions were made of a metal model with 4 cylinders of known dimensions, with pouring performed immediately or after 4 hours of storage. A digital micrometer was used to measure cylinder diameter on the model and the poured casts. Dimensional changes were analyzed according to American National Standards Institute/American Dental Association (ANSI/ADA) Specification 19 (2004 version) (α = 0.05).

Results: There were significant differences among the 3 materials, between the 2 pour times and as a function of storage time (multivariate analysis of variance, p < 0.001). One-way analysis of variance revealed no significant differences between the 2 alternative impression materials, but changes for these materials differed significantly from those for the traditional impression material for immediate (p < 0.05) and 4-hour (p < 0.001) pouring. Linear dimensional changes for the 2 substitute materials were within the limits of the ANSI/ADA specification.

Conclusions: With immediate pouring, both alternative impression materials exhibited minimal dimensional changes, which were maintained or reduced with 4-hour pouring. For both pouring times, these changes were less than 0.5%.

Clinical Significance: The minimal dimensional changes observed with these irreversible hydrocolloid alternative impression materials after 4 hours of storage may save chairside time and help to produce accurate results for procedures such as partial denture framework, surgical guides, and pediatric and orthodontic devices.

Currently available irreversible hydrocolloid alternative products are supplied as medium-body addition-type polyvinyl siloxane (PVS)–based materials. According to the manufacturers of products such as AlgiNot FS (Kerr Corp., Romulus, MI) and Position Penta Quick (3M ESPE, St. Paul, MN), the pouring of impressions may be delayed without any adverse effects on the final result. The manufacturers also claim that impressions may be used for repouring of casts.

The term “alginate substitute” was first used in 2 studies published in the 1980s.1,2 The authors of a more recent study3 reported that 2 irreversible hydrocolloid alternative materials, AlgiNot FS and Position Penta Quick, were dimensionally stable over an extended period (up to 7 days). Another study4 showed that 3 irreversible hydrocolloid alternative materials, AlgiNot, Position Penta Quick and Silgimix (Sultan Chemists Inc., Englewood, NJ), underwent dimensional changes that were within the acceptable linear dimensional changes defined by American National Standards Institute/American Dental Association (ANSI/ADA) Specification 19.5 However, the measurements in that study were made directly from the impressions, rather than from casts poured using the impressions.

A metal master model was designed and custom-milled to simulate a dental arch with 4 cylinders of known dimensions approximating the normal positions of canines and first molars (Fig. 1). Placement of the cylinders in these particular positions allowed the investigators to precisely and accurately measure the individual cylinders (current study), as well as the cross-arch dimension (to be reported in a future article). The measurements of the model were used as controls. The height of each cylinder was 7 mm. At the time of fabrication, the diameter of the small cylinders, in the positions of the canines (cylinders 2 and 3), was set at 6.350 mm and that of the large ones, in the positions of the first molars (cylinders 1 and 4), was set at 8.890 mm. 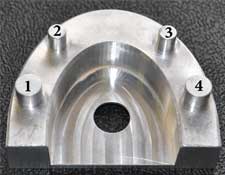 Figure 1. Custom-milled metal model of a dental arch, with 4 cylinders in the positions of the left molar (1), the left canine (2), the right canine (3) and the right molar (4).

A total of 120 impressions of the metal model were made, 40 impressions for each of the 3 materials, with pouring immediately or after 4 hours of storage (i.e., 20 impressions per experimental group). This sample size was based on the results of a previous study by Walker and colleagues,6 with a power of 0.90, a type I error of 0.05 and consideration of the test variables.

The delay in pouring was intended to reflect a realistic clinical situation. More specifically, a delay of 4 hours was estimated as the typical time required to make an impression and send it to a commercial laboratory for pouring of casts. This storage time is shorter than those used in previous studies.3,4

Three impression materials (one traditional irreversible hydrocolloid and 2 alternative materials) were used in this study (Table 1). Impressions of the metal model were made according to each manufacturer’s instructions but were left on the metal model for an extra minute before separation. The impressions were fabricated by one operator (BH) in a manner that closely approximated steps used in the clinical setting. Extreme care was taken to apply the same amount of material into the stock tray for each sample (trays used for each material are described below). The same seating pattern of the metal model was used for every impression, to achieve a consistent thickness of material. For each material, type III dental Buff Labstone (Heraeus Modern Materials, South Bend, IN) was poured immediately into 20 of the impressions. The other 20 impressions for each material were gently wrapped in one damp paper towel each and sealed in a plastic bag for 4 hours before pouring of the casts. This time frame is the same as that used in previous studies of irreversible hydrocolloid materials.7-9 For all 120 impressions, the vacuum-mixed Buff Labstone, obtained from one batch prepared with the recommended ratio of powder to water, was poured into the impressions in a standardized manner. The poured casts were left to set for 1 hour. After being removed from the impressions, casts were allowed to dry for 24 hours before measurements were obtained.

The Jeltrate Plus impressions were made with size 12 Rim-lock trays (Dentsply/Caulk). The AlgiNot FS and Position Penta Quick impressions were made with TruTray Triad custom trays (Dentsply International Inc., York, PA), with PVS adhesive (Kerr Corp.) applied to the trays and allowed to set for at least 15 minutes. To make each custom tray, 2 sheets of softened base-plate wax were adapted on the metal model to a thickness of approximately 2.5 mm and were then trimmed. This assembly was duplicated in the stone used to make the custom trays. The TruTray sheets were adapted on the duplicate stone cast and were then trimmed. Photopolymerization of the materials was achieved with a Triad visible light curing unit (Dentsply International Inc.). The polymerized trays were trimmed, and the metal model was tested for each tray to ensure a consistent surrounding space.

The diameter of each cylinder of the control model and the 120 stone casts was measured by a single investigator (BH) using a Mitutoyo IP 54 digital micrometer (Mitutoyo, Kawasaki, Japan; resolution 0.001 mm; instrument error 0.002 mm). To eliminate any unintentional bias in the measurement process, the casts were coded, and the key coding was kept by a person not involved in performing the measurements.

The percent dimensional change in diameter (Δd) was calculated as follows:

All of the casts poured from the various impression materials showed some dimensional changes relative to the metal control for each cylinder (Table 2, Fig. 2). The greatest percent change for immediate-pour impressions was 0.32% (Table 2). 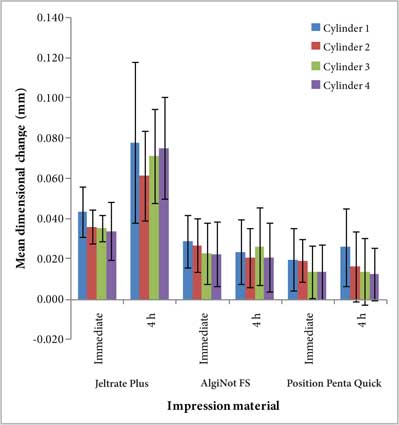 Figure 2: Mean dimensional change for diameter of the 4 cylinders for each impression material, relative to the gold standard (cylinders on the metal model). Error bars show the standard deviation of the mean.

Casts obtained from Jeltrate Plus impressions exhibited the greatest dimensional change for all cylinders (Table 2, Fig. 2). 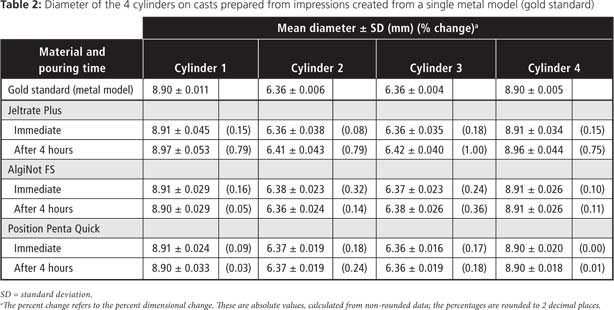 Impressions made using irreversible hydrocolloid materials may undergo dimensional changes if not poured immediately, because of water exchange with the surrounding environment.10 Despite the use of different brands, study conditions and storage intervals, several studies have reported that pouring casts from irreversible hydrocolloid impressions immediately, within 10 minutes, within 30 minutes or 1 hour after making the impression helps to decrease errors and avoid the discrepancies that may occur with prolonged storage.6,7,11-18 Other studies have shown that impressions made with certain brands can be stored for up to 3 hours before pouring of casts.8,9

The results of the current study showed that although the dimensional changes of the traditional impression material, Jeltrate Plus, were minimal with immediate pouring, the percent dimensional change increased with pouring after 4 hours of storage in a damp paper towel. Almost all of the dimensional changes for this material were less than 1%, but the mean dimensional change for cylinder 3 was 1.00% with 4-hour pouring. Other authors have concluded that the stability of irreversible hydrocolloids is time-dependent and that longer storage could lead to variable results.7,11,15 The values reported in Table 2 should be considered in light of potential measurement error: the precision of the digital calipers used in this study was set at about 0.02, which is similar to the magnitude of dimensional change identified.

In this study, the percent mean dimensional change for both AlgiNot FS and Position Penta Quick impression materials was less than 0.4% and was significantly lower than that for Jeltrate Plus antimicrobial alginate with 4-hour pouring. Interestingly, the 2 alternative impression materials sustained this minimal percent change after 4 hours storage. These changes were consistent with the findings of other studies.3,4 As such, pouring dental models with these materials does not appear to entail clinically significant changes. Such a low percent dimensional change would enhance the suitability of these alternative materials when used for purposes beyond making preliminary records. Many clinical procedures could benefit from limited dimensional change of the impression material, which would save chairside time and improve the fit of dental devices. Examples include producing opposing casts in prosthetic treatment, making interocclusal devices, preparing surgical guides for implants, and creating casts for removable partial denture framework and orthodontic and pediatric devices. The authors of a recent clinical pilot study25 reported a triple cone-beam computed tomography procedure with a Triple Tray AlgiNot impression in place, which was used to augment a 3-dimensional virtual skull model with detailed dental occlusal data. This application reflects the thixotropic nature and dimensional stability of this alternative impression material.

Irreversible hydrocolloid alternative materials are automixed, which produces a predictable consistency, which in turn leads to precise setting times. The recommended time for placement of impression material in the mouth is 1 minute for AlgiNot FS and 1 minute and 40 seconds for Position Penta Quick. Such a short setting time is convenient for both patient and dentist.

Irreversible hydrocolloid alternatives are currently available in only one viscosity and are considerably more expensive than irreversible hydrocolloid materials. They may not be suitable for making impressions if severe soft-tissue undercuts are present or if the teeth are highly mobile. The use of a custom tray in conjunction with PVS adhesive is recommended by the manufacturers. Although using custom trays may increase the cost and time of preparing impressions, it may also be an advantage in producing precise casts.

This study of 2 new alternative impression materials had one main limitation: only a single variable (cylinder dimensions) was tested, with other aspects of performance remaining to be investigated. The study will be extended to further assess the accuracy of impression-making, by measuring the cross-arch dimensions of casts of the metal cylinders. Other future studies will involve testing dimensional stability of the impression materials after repouring of casts from the impressions relative to other types of materials, such as extended-pour irreversible hydrocolloids.

Dimensional changes were evident with all 3 impression materials tested in this study, a traditional material (Jeltrate Plus) and 2 alternative materials (AlgiNot FS and Position Penta Quick). However, the magnitude of these changes is of questionable clinical significance.