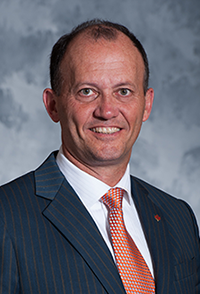 Professional commitment runs deep in Dr. Peter Doig’s bloodlines. CDA’s new president for 2013-14 comes from a family that has established an impressive legacy of leadership in the health professions. His father, Noel, was a physician who was actively involved in the political landscape in Saskatchewan during the creation of medicare in 1962. His sister, Anne, served as president of the Canadian Medical Association in 2009-10—the same years that his brother, Chip, was president of the Alberta Medical Association!

And so it now turns to Dr. Doig—Peter, that is—to write another chapter in the family narrative of exemplary leadership. He brings to CDA a bold vision for the future of Canadian dentistry and a passion and commitment to move the dental profession forward.

Dr. Doig credits his father, the sole physician in the small rural town of Hawarden, Saskatchewan, for his decision to enter dentistry. “My father was a very busy general practitioner surgeon and a very strong influence in my life. The devotion he showed to his profession and his patients, and his involvement in organized medicine, were a constant influence throughout my upbringing,” explains Dr. Doig.

When he was a small child, Dr. Doig and his siblings moved to Saskatoon, where he would eventually pursue his post-secondary education at the University of Saskatchewan. Like his father, Dr. Doig studied biological sciences. He knew he wanted a career in health sciences, but without the pressures of call schedules that his father’s practice demanded. Dentistry fit the bill perfectly.

After earning his DMD in 1983, Dr. Doig moved to Dauphin, Manitoba, to begin his practice in general dentistry, starting out as an associate with the father-and son team of Drs. Vern and Roger Watson. But within 18 months of joining the practice, Dr. Doig was on his own. “The Watsons were my early mentors and helped me greatly as I started my career,” he recalls. “But I likely would have benefitted from a longer period of mentorship in my early practice years.” As a result, he is a strong supporter of the current mentoring initiatives at the University of Manitoba’s faculty of dentistry.

Sharing a tradition of giving back to the profession

His decision to get involved in organized dentistry was shaped by “two people I could always count on for advice,”—Mr. Ross McIntyre, then the executive director of the Manitoba Dental Association (MDA), and Dr. George Peacock, then the secretary-registrar of the College of Dental Surgeons of Saskatchewan and a family friend. “When Mr. McIntyre initially asked me to get involved, I resisted a little,” he remembers. Drawing on his father’s wisdom, he eventually relented. “My father strongly believed that getting involved would serve the needs of the profession and the greater needs of society. And that’s had a profound effect on me.”

For 26 years now, Dr. Doig has been giving back to the dental profession at the local, provincial or national levels. He entered organized dentistry as president of the Northern Manitoba Dental Society in 1985 and subsequently served on numerous committees for the MDA before being elected to its Board of Directors in 1997. He went on to serve as president of the MDA in 2004.

His entry into organized dentistry at the national level came when he was delegated as the Manitoba representative on CDA’s Task Force on Membership Equity. In 2005, after his term as president of the MDA ended, Dr. Doig went on to serve on CDA’s Board of Directors. He’s since served or chaired many CDA committees, including the Working Group in Dental Education, Chairing the Strong Profession Working Group, the Advocacy Committee, and the Audit Committee. His involvement with the CDA-ODA Working Group, which was instrumental in the formulation of the new membership model for CDA, was a career highlight. 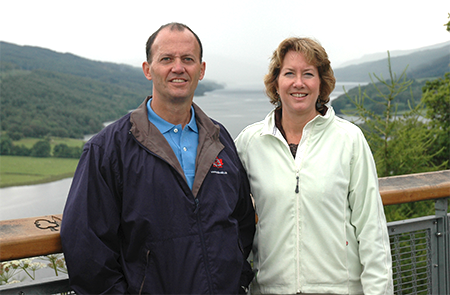 A trip to Scotland: Dr. Doig, with wife Terrie, at the picturesque Queen’s View in Highland Perthshire overlooking Loch Tummel.

The framework for a national oral health strategy

Dr. Doig’s primary goal for his term as CDA president is to initiate the work required to develop a comprehensive national oral health strategy. The overarching goal of this project is ambitious: to ensure that all Canadians have the dental care they need, no matter where they live in Canada or their socioeconomic status. In explaining why he feels it’s the ideal time for CDA to establish the framework of a national oral health care strategy, Dr. Doig cites the many challenges facing dentistry: access to care, affordability of dental care, the decline in public trust of the profession, corporatization and consumerism in dentistry and the emergence of oral health care models delivered by other self-interested parties.

As part of the strategic plan for developing a national framework, increasing CDA’s advocacy efforts will be a priority. “CDA has 2 areas of focus: knowledge and advocacy. I believe CDA does a good job of collecting, analyzing and disseminating knowledge but perhaps we can increase and improve its advocacy efforts,” he explains. “I believe we can do more to increase CDA’s visibility as the credible experts in oral health care to policy makers, politicians and the public.”

Building upon CDA’s relationships is central to the work Dr. Doig plans to accomplish in the coming year. “CDA has made great progress in strengthening relationships within the dental profession and with other groups of health care professionals,” he says.

“We should now expand these relationships to include more engagement and visibility with individual Canadian dentists.” 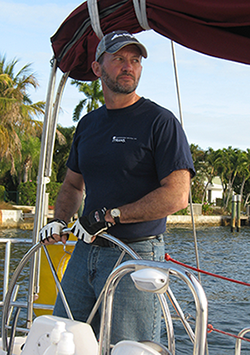 Dr. Peter Doig participating in one of his many athletic pursuits, in the waters off Fort Lauderdale, Florida.

Despite experiencing a cycling accident last summer that temporarily prevents him from practising dentistry, Dr. Doig shows no signs of slowing down during his CDA presidency. He was the victim of a hit-and-run while training on his road bike in Calgary, “I can remember turning onto Country Hills Boulevard at about 3:30 pm and then...I was found unconscious on the road by a civic worker.” The accident left him with a brain injury that has steadily improved, but the main problem is his vision—“not very good for doing dentistry,” he states. Of the devastating injury and his inability to practise dentistry as he has for the past 30 years, he takes a positive outlook, “It has given me more time to spend on the duties of president.”

Although he admittedly doesn’t have much leisure time outside of dentistry, Dr. Doig quite enjoys spending time at his family’s summer cabin with Terrie, his wife of 30 years, along with his 3 children, Jennifer, Andrew and Lindsay.

Dr. Doig’s had a life-long interest in sport and applies himself to his athletic pursuits with the same enthusiasm and commitment he brings to dentistry. For 44 years, he’s been involved in competitive swimming—first as a competitor and now as head coach of the Parkland Gators Swim Team, a team he formed in 1997. He also sails, water-skis, and has competed in triathlons, half marathons, and one marathon.

Not surprisingly, as an avid cyclist, swimmer and runner, Dr. Doig is undaunted about the long climbs and distances that lay ahead at CDA. He’s looking forward to leading the association through a productive year. “I hope to have both staff and Board members enjoy the journey this year,” he concludes. It promises to be an excellent journey indeed—one that will continue the proud Doig family tradition.